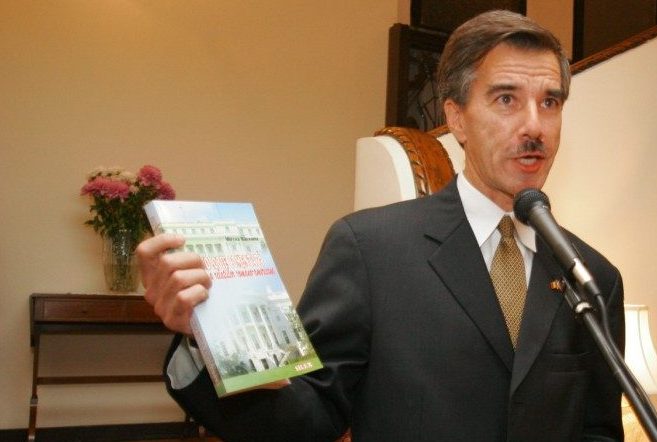 It was a Christmas Eve, half a century ago, that my father still remembers well. Dressed in a morning suit he had hastily borrowed, he witnessed William Crawford present his credentials to Gheorghe Gheorghiu-Dej in an official ceremony at Palatul Victoria on December 24, 1964. Crawford thus became the first U.S. Ambassador to Romania, in what was an important upgrading of the relationship at the height of the Cold War.

When I look at the photographs from the ceremony, I still recognize the faces among the American diplomats: my father’s friends and colleagues. Many have passed away; others, like my father, retired long ago. They were just a handful among the countless officials, Romanian and American, who since at least 1880 have promoted better relations between our two countries, through good times and difficult times too.

Some extraordinary Americans have served this cause in Bucharest. Eugene Schuyler, the first U.S. diplomatic envoy to Romania, was a leading expert on the region and a friend of Tolstoy and Turgenev. The New York Times labeled him the only true “diplomatist” then in the service of the United States. He learned Romanian, knew everyone (including the mercurial Mihai Eminescu), and followed developments closely. He was on hand for King Carol’s accession to the throne in 1881. Schuyler predicted, correctly, that the coronation would strengthen Romania and its institutions.

Charles Vopicka, a Czech-American named by President Wilson as U.S. minister, lauded Romania’s wartime sacrifices and backed her aspirations in the First World War. He stood firm in German-occupied Bucharest until General von Mackensen forced him out. Vopicka never lost hope that Romania would prevail, even after Russia’s withdrawal from the war in 1917. Back in America, there was no more tireless advocate for the Romanian cause than Vopicka.

Even before Ceauceascu came to power in 1965, Crawford recognized Romania’s leaders were adopting an independent line from Moscow. But Crawford recounted later, wryly, that two-thirds of his time was spent negotiating with the Department of State rather than with Romanians. “My main problem,” he recalled, “was to convince the Department that things really were changing.” Crawford’s insights prompted a full review of U.S. policy towards Romania and set the stage for the unique but complex relationship the U.S. and Romania maintained during the Cold War.

At times, U.S.-Romanian relations have also been marked by tragedy. U.S. Minister Franklin Mott Gunther watched with mounting horror as the Iron Guard committed atrocities and Marshal Antonescu steered Romania ever closer to the Nazi regime. Gunther took his protests directly to Antonescu in 1941, but to no avail. Sadly, he passed away just days after Antonescu declared war on the United States, too ill to get up from his sick bed in Bucharest.

In the waning months of World War II, U.S. diplomat Burton Berry saw Soviet occupation authorities moving rapidly to undermine Romania’s independence and pushing Moscow’s proteges into key positions. Romania was “a window through which we are able to observe Soviet methods at work,” he warned Truman and others. The U.S. government needed to be firmer in backing hard-pressed democrats throughout Eastern Europe, he emphasized. But it was too little, too late.

Nor did the geopolitical détente between Washington and Bucharest during the Ceausescu years make his regime any more open or tolerant internally; in fact, some argue Western “patience” with the dictator had the opposite effect. But U.S. diplomats, including Harry Barnes and Roger Kirk, were hardly blind to the darkness of the Ceausescu era. There was no easy recipe for pursuing common foreign policy interests while pressing Ceausescu to observe basic human rights.

Today, Romania has happily taken its place in the two preeminent Western institutions, NATO and the EU. To have done so in just two decades is, as I often remind my European and American friends, a remarkable accomplishment. Romanian diplomacy – and, yes, Romania’s political leaders – deserve full credit. U.S. envoys, too, played a strong, supportive role. In 2015, the U.S.-Romanian partnership is closer than ever before.

Is there a common thread in how our two countries have interacted since Eugene Schuyler’s days, when he worked by gaslight out of a room at the Capsa? Through war and peace, through boom and bust, Americans serving in Romania have felt a strong affinity for the country and its people. It was true in my family, and we were not alone. It is manifest in oral histories of U.S. diplomats going back to the sixties. This persistent bond has existed for nearly a century and a half – and I know it will hold true for generations to come.