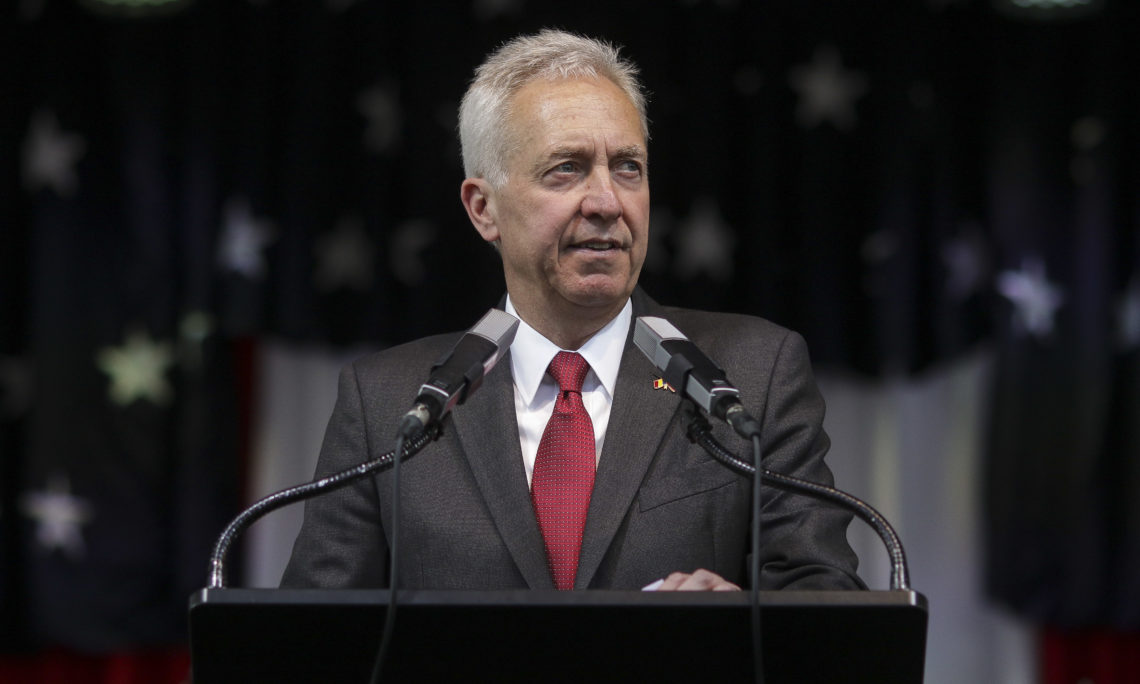 – As prepared for delivery –

Mr. President, Mr. Prime Minister, Your Royal Highness, Your Excellences, Distinguished Guests, Ladies and Gentlemen, welcome to the Embassy of the United States of America as we celebrate our nation’s independence.

Let me first thank our donors, vendors, the American Chamber of Commerce, and Major League Baseball for their support.  Without their generosity, today’s celebration would not have been possible.

As President Trump said to you, Mr. President, just last month, “The people of Romania and America share much in common — a love of freedom, proud cultures, rich traditions, and a vast and storied landscape to call home.”

Something else our two nations have in common is a love of sports.  This year we celebrate the 70th anniversary of when Jackie Robinson broke the color barrier in Major League Baseball.  This milestone in American history not only changed the game of baseball, but paved the way for Dr. Martin Luther King, Jr. and the modern Civil Rights movement.  America’s struggle to be a more tolerant society, embracing its full diversity, was on display for the whole world to see in 1947.  Seventy years later, we are delighted to welcome to Bucharest Jackie Robinson’s daughter, Ms. Sharon Robinson.  We are inspired by her father’s courage to do what was right, even when it was extremely difficult to do so.  Jackie Robinson taught us that we cannot sit on the sidelines and hope for the best, we must be active citizens and strive for what is best for our country, our people.

We are also honored to have with us today three former Major League Baseball stars, Scott Erickson, LaTroy Hawkins, and Marlon Anderson.

This year Romania and the United States celebrate the 20th anniversary of our strategic partnership.  At your meeting in Washington, Mr. President, you encouraged President Trump to look to the future of our partnership and to explore ways of strengthening it.  And, President Trump replied that our “partnership covers many dimensions, including economic, military and cultural ties.  And today we are making those ties even stronger.

Mr. President, Ladies and Gentlemen, my embassy will now fulfill my President’s commitment to further strengthen our partnership.  This autumn, we will host the largest American trade mission ever to explore Romania, and we will encourage investment between our countries in both directions.  We can do this most effectively in a policy environment here in Romania that is stable, predictable, transparent and marked by genuine consultation with all stakeholders, including foreign investors.  Working with partners such as the Romanian-American Foundation, we will encourage innovation and entrepreneurship in Romania.

Our military and law enforcement collaboration has never been stronger, and we will work with our Romanian partners to improve transatlantic security, ensure stability in the Black Sea region, and counter terrorism here and far abroad.  We are eager to support Romania in its commitment to invest two percent of its national output in defense.

We will engage with Romanian universities, research centers, and cultural institutes to promote exchanges between American and Romanian scholars, students, researchers and artists.  We will seek to expand the work of the Fulbright Commission, and support the Romanian government as it establishes a new position at its Washington embassy to promote academic exchange programs.

We look forward to advancing every dimension of our partnership with the new government under Prime Minister Tudose, and with Members of the Romanian Parliament.

Mr. President, Ladies and Gentlemen, at this 20th anniversary of our strategic partnership, we must chart its future course, but let me also take a moment to look to the past, to recognize what we have accomplished: Romania’s entry into NATO, our shared sacrifice on the battlefields of Iraq and Afghanistan, the opening of the Deveselu missile defense facility and, Mr. President, your meeting in Washington with President Trump.  In its confirmation of the strength and ambition of our partnership, this was the most significant bilateral event for Romania and America in many years, perhaps in generations.  Let us recall some of my President’s remarks in the Rose Garden of the White House that afternoon.

“I want to thank the Romanian people for everything they contribute to our common defense and to the fight against the evil menace of terrorism.”  America deeply honors those Romanians who have paid the ultimate sacrifice in this struggle.

To you, Mr. President, he said, “I want to applaud you and your courageous efforts in Romania to fight corruption and defend the rule of law.  This work is necessary to create an environment where trade and commerce can flourish and where citizens can prosper.  We support very strongly Romania, and support that fight on corruption.  We will always support that.”

And, in conclusion, President Trump emphasized, “I look forward to strengthening our alliance with your country and our bonds with your people.  The future of Romania, and Romania’s relationship with the United States, is very, very bright.”

Now ladies and gentlemen, I have the honor of introducing the President of Romania, Klaus Werner Iohannis.

Independence Day at the Embassy