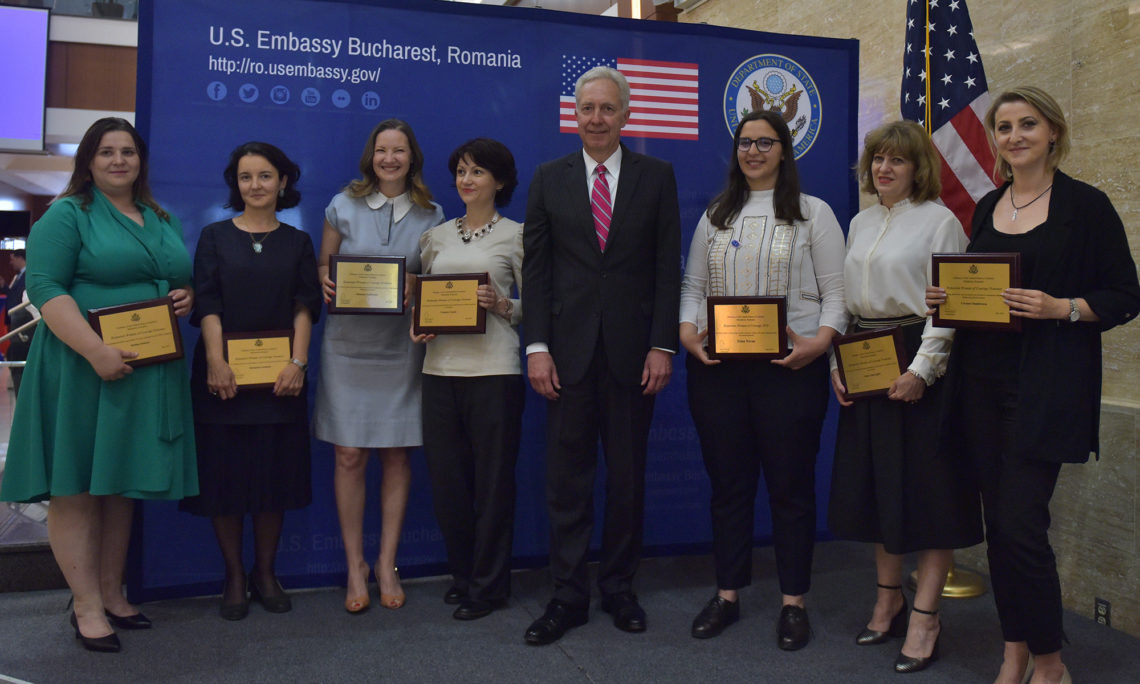 In 2007, the Department of State established the International Women of Courage Award to honor women who exemplified exceptional courage and leadership in advocating for human rights, women’s equality, and social progress – often at great personal risk.

Annually, U.S. Embassies around the world nominate one candidate for the State Department’s International Women of Courage Award. However, Romania has so many extraordinary women of courage that Embassy Bucharest holds its own annual ceremony to recognize them. These women are strong, inspiring leaders who demonstrate unwavering commitment to their communities. So today, the Embassy will recognize seven Romanian women of courage, including our International Woman of Courage nominee for Romania for 2019.

Ambassador Hans Klemm at the International Women of Courage Ceremony

Good afternoon, everyone. I am delighted you could all join us today to celebrate seven Romanian women who embody service, leadership, and, above all else, courage. While these women each devote their energies to different issues facing Romania, they all serve as inspiring reminders of how determined individuals can make a difference and effect lasting change in their communities and across their country.

With this in mind, I would like to say a few words about our principal honoree, Irina Novac.

Courage comes in many forms. Sometimes courage is the result of a long lifetime of experience and determination, and sometimes it is the result of youthful energy and optimism for the future. This latter type of courage is exemplified by Irina, who was a high school student in Adjud when she and her friends resisted intense pressure to forego supporting women and other minority groups in Romania.

In 2016, Irina was one of twenty-five Romanian high school students who took part in the Future Leaders Exchange, or FLEX, program, spending a year studying in Albuquerque, New Mexico. While living in the United States, Irina did much more than just attend school. She spent one hundred hours volunteering between a special education classroom at a local elementary school; at Project Linus, an NGO providing blankets to children in need; and working to improve the Albuquerque Bosque [bos-key] Trail along the Rio Grande.

Irina returned to Romania eagerly looking for opportunities to share what she had learned from her year abroad. She received a grant from the State Department, through American Councils, the FLEX implementing partner, to put together a conference, “Women Talk,” bringing together young women and men from her region to hear from professionals and experts on the challenges women and girls face and how to address these issues. One of the panelists she invited was a transgender person.

After she began promoting the conference, certain parties on social media began viciously attacking her and the conference, stating she was part of an American plot to undermine traditional Romanian values. As a result of this, as well as similar stories in the press, the public venue that had offered Irina a room for the conference withdrew their offer.

Irina and her colleagues suddenly began receiving threats from several directions, including from school administrators who wanted to fail the students for their involvement in the project. Religious figures in the area also publicly criticized her.

Irina and her colleagues bravely continued, finding another venue and holding the conference. During the conference, someone claiming to be from a media outlet began loudly accusing Irina of corrupting the youth in attendance. Members of the community even went to Irina’s house and told her parents that their daughter was a bad influence on the community and they should intervene.

Despite all of this, Irina continues actively supporting the rights of women and girls, including recently organizing a film festival dedicated to important women forgotten by history.

For her perseverance in promoting women’s and girls’ rights in the face of strong public pressure against her, we believe Irina exemplifies the ideal Woman of Courage.

Our first Woman of Courage nominee today is Carmen Dumitrescu.

Carmen Dumitrescu is an outstanding investigative journalist who covers a region where few others dare to go in order to provide objective reporting. Her investigative skills led several international outlets to contact her for help in documenting corruption in Romania. In her articles, she promotes western values such as democracy, anti-corruption, freedom of expression, and higher standards for education. Carmen persevered even when her reports exposed her to physical and legal pressures. As an independent reporter, she relies on her own determination to generate awareness and a positive change.

Our next Woman of Courage nominee is Melania Medeleanu.

The next nominee’s name is linked to magic: she is a courageous woman because she tries to bring magic into the lives of kids and their families fighting a cruel disease. Melania Medeleanu, the “mother” of MagicCamp and MagicHome, decided five years ago to create a place where children fighting cancer could find joy, courage, and friendship. Overcoming many obstacles, and never giving up, she first founded MagicCamp, a summer camp for young cancer patients. She then founded MagicHome, a network of 10 houses and apartments in 8 cities, where kids in treatment and their parents can find refuge from their hospital rooms and recharge in a place more like home. Against the odds, Melania and her colleagues transformed “magic” into a brand depicting generosity, solidarity and hope. And for that, she is one of the women of courage we celebrate today.

Our Woman of Courage nomination goes to Carmen Uscatu and Oana Gheorghiu.

A cancer diagnosis for a child is a parent’s worst nightmare. However, with modern advances, today, childhood cancer has an 80 percent survival rate in the EU, yet, sadly, one in two Romanian children suffering from cancer do not survive. Carmen Uscatu and Oana Gheorghiu have demonstrated incredible bravery and perseverance in their dauntless efforts to give renewed hope to those facing childhood cancer and their families. Through their Give Life Association (Asociația Dăruiește Viața), Carmen and Oana have achieved the near impossible: privately raising more than 26 million euros from more than 1,800 companies and 260,000 individual donors to plan and build a pediatric oncology hospital, Romania’s first new hospital in more than three decades.

Along the way, they have inspired a new civic movement. Together with Ogilvy Romania, they created the Happiness Exchange, the first online fundraising platform allowing donors to track their donations. Through the Happiness Exchange, individual donors have raised more than 36 million euros for Romanian charities. Despite an increasingly difficult fundraising environment for nonprofits in Romania, they continue to advocate relentlessly for the health and happiness of Romanians. Carmen Uscatu and Oana Gheorghiu are among Romania’s finest examples of committed civic engagement and courage as they pursue their dream to revolutionize the Romanian health sector and ensure that the benefits of economic prosperity accrue to all Romanians.

Our next Woman of Courage nominees are Iustina Ionescu and Romanita Iordache.

It takes a great deal of courage to challenge prevailing stereotypes and stand up for justice in a world unfriendly or even hostile to the victims of injustice. Iustina Ionescu and Romanița Iordache, two leading legal experts and advocates for the human rights of LGBTI persons, are the embodiment of such courage. Together with their colleagues from the ACCEPT NGO, Iustina and Romanița had the courage to challenge practices and policies that made discrimination and abuse against LGBTI persons possible. They provided legal assistance to LGBTI persons targeted by hate crime and discrimination and successfully tried cases before national courts and the European Court of Human Rights. Their efforts proved instrumental in the Coman-Hamilton family case and led to the Court of Justice of the European Union clarifying that the term “spouse” in freedom of movement laws includes same-sex couples. Both Iustina and Romanița emphasized that their achievements are the result of a team effort with the ACCEPT NGO.