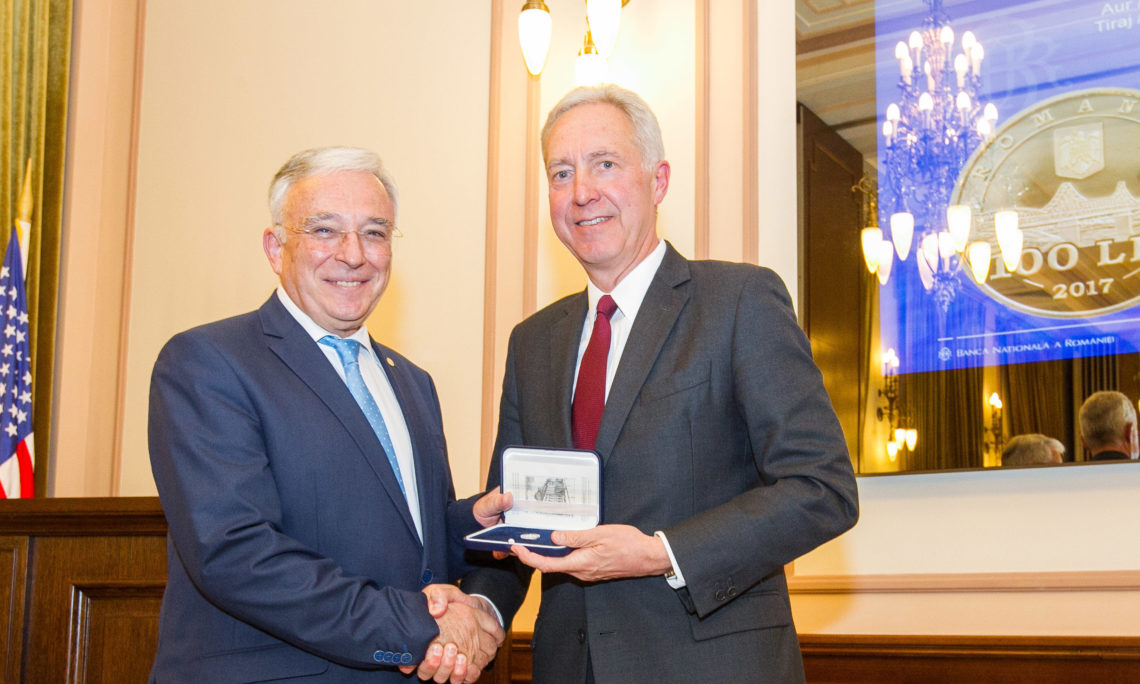 Good Evening. President Constantinescu, Governor Isărescu, Ladies and Gentlemen. I would like to offer a special note of gratitude to Governor Isarescu and the Board of the National Bank of Romania for this evening in which we are celebrating the 20th anniversary of the Strategic Partnership between the United States and Romania.

One of those global challenges has been the fight against terrorism. Today is a solemn day, as we recall the victims of the terrorist attacks on September 11, 2001. These attacks shook the world and claimed victims not only from the United States but from 90 countries, including Romania.

In the 16 years since the attacks, Romania has been a faithful partner, and since 2004 a NATO ally, supporting our efforts to address global security concerns. We are mindful of the sacrifices of Romanian soldiers in Iraq and Afghanistan as part of coalition efforts to confront global terrorism.

The United States-Romania Strategic Partnership is rooted in our mutual commitment to democratic values, including the rule of law, open markets, respect for and promotion of human rights, and strong bonds between the people of our nations.

To mark the 20th anniversary. President Iohannis and President Trump met at the White House this year and celebrated the many pillars of our partnership, including economic, military, and cultural dimensions, and agreed to make these ties even stronger.

The Government of the United States congratulates Romania on this important anniversary and thanks the Romanian people for their steadfast friendship and commitment to our bilateral relationship. We now look forward to the next twenty years of the U.S.-Romanian Strategic Partnership.

As President Clinton — the first American President to visit a free Romania — said during his historic speech in University Square on July 11, 1997, “As long as Romania proceeds down democracy’s road, America will walk by your side.”

So while we are gathered here tonight to commemorate our Strategic Partnership, in fact we should commemorate the courage of the Romanian people, for choosing to proceed down the road to democracy and an open economy. And we will remain true to President Clinton’s promise, to walk by your side.