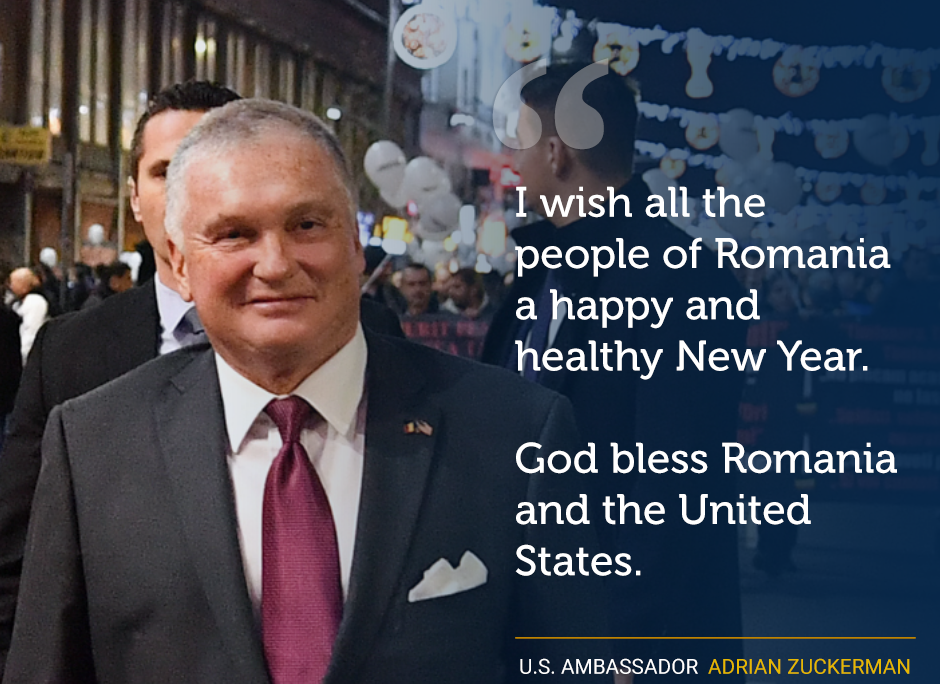 While we have endured many hardships this past year – some of us much more than others – we should be filled with hope as 2020 draws to an end. This past year we experienced heartache and disruption caused by a global pandemic the likes of which has not been seen for over 100 years. We now have developed vaccines that should put a halt to this scourge. Shortly, we should be able to finally say goodbye to Covid and focus on rebuilding our lives and our economies. 2021 will be a year filled with joy and achievements built on the foundation created in this most difficult of years. All Romanians should be proud of what they have done this year to make their children’s future even better in 2021.

The biggest achievement has been the peaceful and democratic transfer of power to a new parliament and government. The people of Romania have spoken and have chosen freedom and the rule of law over the leftover drivel of communist cronyism and corruption. Now, with four years of stability ahead, Romanians will be able to rebuild their economy and infrastructure. Romania’s commitment to free markets and economic development will make it the European leader it can be and deserves to be.

Romania has made great strides in advancing the bilateral relationship with the United States. Our relationship has never been better. Together we have reached new heights in our military and security cooperation, economic development, energy development, agrarian development, rule of law implementation, 5G legislation, law enforcement, fighting organized crime and fighting human trafficking. These achievements happened because of Romanians’ hard work, commitment to free markets, the rule of law and belief in themselves and in doing the right thing.

In December of 2019 I said that I was “confident 2020 will bring even greater successes for Romania and our strategic partnership….I want to unequivocally emphasize …[that] together with the Romanian people [we] will achieve great things in 2020.”

We did achieve many great things this year, among them:

The people of Romania should not have to suffer a lower standard of living than Western Europeans. It is now Romania’s time to prosper. It is now time for the Romanian people – all Romanian people – to elevate their standard of living. Free market competition will bring wealth and prosperity to all, not just the politically connected descendants and cronies of the former communists.

This is a time of optimism and rebuilding. This is the time for all those Romanians who lost hope that their children would have a better tomorrow in Romania to come back and help build a better Romania. This is the time for the visionaries who have built businesses around the world to come back and build them in Romania. Cities throughout Romania, like Cluj, Oradea, Iasi, Timisoara and Bucharest, are models of growth and development. The Romanian economy is primed to unleash its true potential. Romania is the new gateway to Europe.

Common sense tax and business laws and regulations will pay big dividends. It is imperative that the drag of endemic corruption on the economy ends. The ability of the politically connected to control business interests and limit free market competition must end. Romania’s enormously high number of government owned entities, the highest in Europe, must be privatized. Business transparency and accountability are paramount. A stable, predictable, and fully transparent business environment will boost development, attract new investments and entrepreneurs and create a competitive economy.

I am confident that 2021 will be even better than 2020. I am certain that with President Iohannis, Prime Minister Citu and a like-minded Parliament Romania, will have the vision and leadership to continue the momentum started this year and achieve great things. I believe in the Romanian renaissance. I urge all Romanians to have the courage to think big, go long and do the right thing.

Lastly, I will say it again for the last time this year, not just for Romanians, never forget Romania has no better friend than the United States.