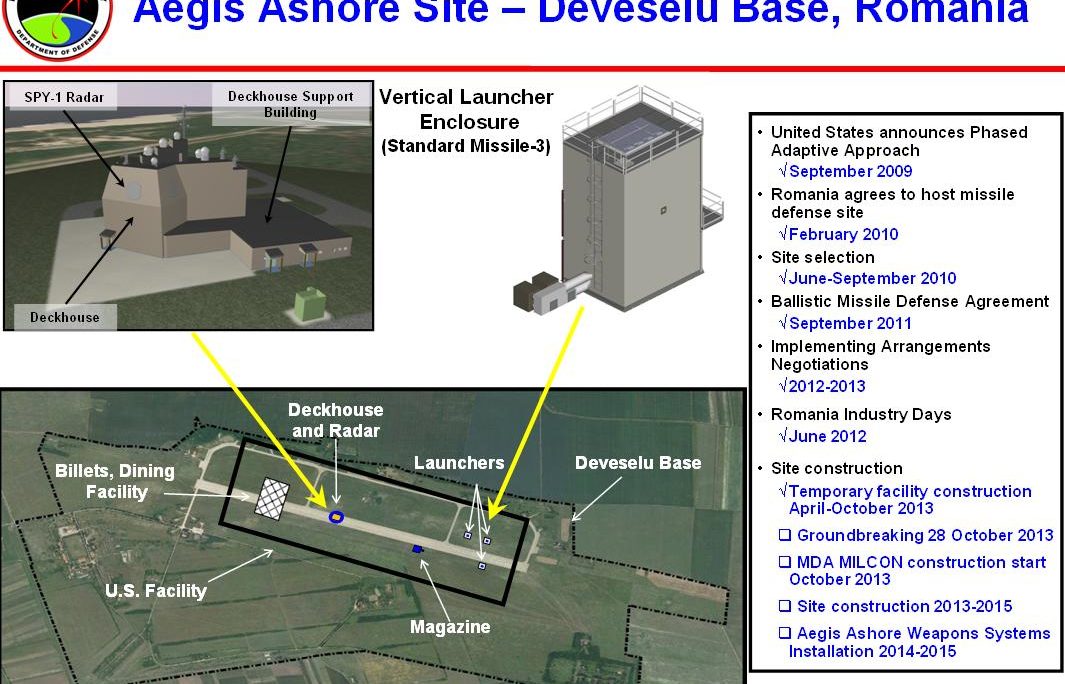 President Obama has approved the recommendation of Secretary of Defense Gates and the Joint Chiefs of Staff for a phased, adaptive approach for missile defense in Europe.  This approach is based on an assessment of the Iranian missile threat, and a commitment to deploy technology that is proven, cost-effective, and adaptable to an evolving security environment.

Starting around 2011, this missile defense architecture will feature deployments of increasingly-capable sea- and land-based missile interceptors, primarily upgraded versions of the Standard Missile-3 (SM-3), and a range of sensors in Europe to defend against the growing ballistic missile threat from Iran.  This phased approach develops the capability to augment our current protection of the U.S. homeland against long-range ballistic missile threats, and to offer more effective defenses against more near-term ballistic missile threats.  The plan provides for the defense of U.S. deployed forces, their families, and our Allies in Europe sooner and more comprehensively than the previous program, and involves more flexible and survivable systems.

The Secretary of Defense and the Joint Chiefs of Staff recommended to the President that he revise the previous Administration’s 2007 plan for missile defense in Europe as part of an ongoing comprehensive review of our missile defenses mandated by Congress.  Two major developments led to this unanimous recommended change:

New Threat Assessment:  The intelligence community now assesses that the threat from Iran’s short- and medium-range ballistic missiles is developing more rapidly than previously projected, while the threat of potential Iranian intercontinental ballistic missile (ICBM) capabilities has been slower to develop than previously estimated.  In the near-term, the greatest missile threats from Iran will be to U.S. Allies and partners, as well as to U.S. deployed personnel – military and civilian –and their accompanying families in the Middle East and in Europe.

Advances in Capabilities and Technologies:  Over the past several years, U.S. missile defense capabilities and technologies have advanced significantly.  We expect this trend to continue.  Improved interceptor capabilities, such as advanced versions of the SM-3, offer a more flexible, capable, and cost-effective architecture. Improved sensor technologies offer a variety of options to detect and track enemy missiles.

These changes in the threat as well as our capabilities and technologies underscore the need for an adaptable architecture. This architecture is responsive to the current threat, but could also incorporate relevant technologies quickly and cost-effectively to respond to evolving threats.  Accordingly, the Department of Defense has developed a four-phased, adaptive approach for missile defense in Europe.  While further advances of technology or future changes in the threat could modify the details or timing of later phases, current plans call for the following:

Phase One (in the 2011 timeframe) – Deploy current and proven missile defense systems available in the next two years, including the sea-based Aegis Weapon System, the SM-3 interceptor (Block IA), and sensors such as the forward-based Army Navy/Transportable Radar Surveillance system (AN/TPY-2), to address regional ballistic missile threats to Europe and our deployed personnel and their families;

Phase Two (in the 2015 timeframe) – After appropriate testing, deploy a more capable version of the SM-3 interceptor (Block IB) in both sea- and land-based configurations, and more advanced sensors, to expand the defended area against short- and medium-range missile threats;

Phase Three (in the 2018 timeframe) –  After development and testing are complete, deploy the more advanced SM-3 Block IIA variant currently under development, to counter short-, medium-, and intermediate-range missile threats; and

Phase Four (in the 2020 timeframe) – After development and testing are complete, deploy the SM-3 Block IIB to help better cope with medium- and intermediate-range missiles and the potential future ICBM threat to the United States.

Throughout all four phases, the United States also will be testing and updating a range of approaches for improving our sensors for missile defense.  The new distributed interceptor and sensor architecture also does not require a single, large, fixed European radar that was to be located in the Czech Republic; this approach also uses different interceptor technology than the previous program, removing the need for a single field of 10 ground-based interceptors in Poland.  Therefore, the Secretary of Defense recommended that the United States no longer plan to move forward with that architecture.

The Czech Republic and Poland, as close, strategic and steadfast Allies of the United States, will be central to our continued consultations with NATO Allies on our defense against the growing ballistic missile threat.

The phased, adaptive approach for missile defense in Europe:

Sustains U.S. homeland defense against long-range ballistic missile threats.  The deployment of an advanced version of the SM-3 interceptor in Phase Four of the approach would augment existing ground-based interceptors located in Alaska and California, which provide for the defense of the homeland against a potential ICBM threat.
Speeds protection of U.S. deployed forces, civilian personnel, and their accompanying families against the near-term missile threat from Iran.  We would deploy current and proven technology by roughly 2011 – about six or seven years earlier than the previous plan – to help defend the regions in Europe most vulnerable to the Iranian short- and medium-range ballistic missile threat.

Ensures and enhances the protection of the territory and populations of all NATO Allies, in concert with their missile defense capabilities, against the current and growing ballistic missile threat.  Starting in 2011, the phased, adaptive approach would systematically increase the defended area as the threat is expected to grow.  In the 2018 timeframe, all of Europe could be protected by our collective missile defense architecture.
Deploys proven capabilities and technologies to meet current threats.  SM-3 (Block 1A) interceptors are deployed on Aegis ships today, and more advanced versions are in various stages of development.  Over the past four years, we have conducted a number of tests of the SM-3 IA, and it was the interceptor used in the successful engagement of a decaying satellite in February 2008.  Testing in 2008 showed that sensors we plan to field bring significant capabilities to the architecture, and additional, planned research and development over the next few years offers the potential for more diverse and more capable sensors.
Provides flexibility to upgrade and adjust the architecture, and to do so in a cost-effective manner, as the threat evolves.  Because of the lower per-interceptor costs and mobility of key elements of the architecture, we will be better postured to adapt this set of defenses to any changes in threat.

We will work with our Allies to integrate this architecture with NATO members’ missile defense capabilities, as well as with the emerging NATO command and control network that is under development.  One benefit of the phased, adaptive approach is that there is a high degree of flexibility – in addition to sea-based assets, there are many potential locations for the architecture’s land-based elements, some of which will be re-locatable.  We plan to deploy elements in northern and southern Europe and will be consulting closely at NATO with Allies on the specific deployment options.

We also welcome Russian cooperation to bring its missile defense capabilities into a broader defense of our common strategic interests.  We have repeatedly made clear to Russia that missile defense in Europe poses no threat to its strategic deterrent.  Rather, the purpose is to strengthen defenses against the growing Iranian missile threat.  There is no substitute for Iran complying with its international obligations regarding its nuclear program.  But ballistic missile defenses will address the threat from Iran’s ballistic missile programs, and diminish the coercive influence that Iran hopes to gain by continuing to develop these destabilizing capabilities.