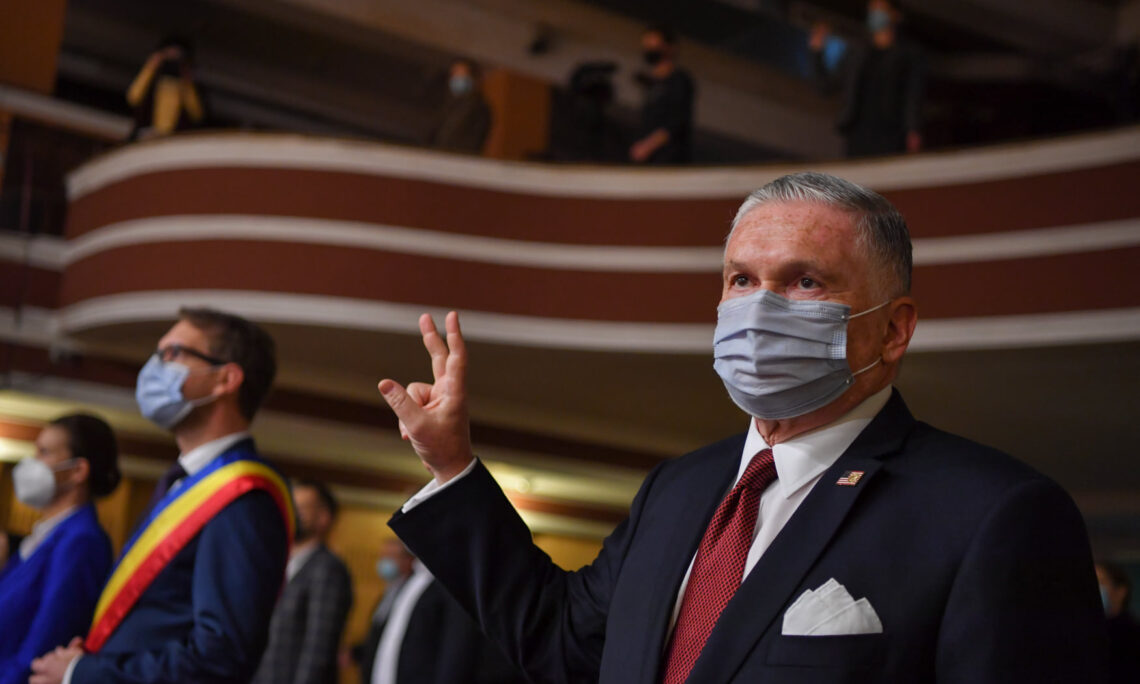 At noon today in Timisoara, a whistle blew. As in prior years it let Romania, Europe, and the world know, the Romanian Revolution was a success.

Thirty-one years ago that whistle proclaimed that the dark and evil days of communism had come to their just end. It blew after forty-five years of thievery, murder, censorship and oppression. Somehow and in some way the indomitable human spirit survived throughout the colorless decades. And the spark that set that spirit free and allowed Romanians to reclaim their country was lit by the brave men and women of Timisoara.

By late November 1989, the winds of change were blowing across Eastern Europe and the murderous dictator Ceausescu swore they would not reach Romania. Tensions were high as he cancelled flights and closed borders in an effort to stop the inexorable spread of freedom. Romanians, however, were done with his relentless crack-downs and criminally poor leadership and policies. When the loyal and devout gathered in Timisoara to protect one of their own, it was already too late for the tyrants to wrench freedom away, again, from the Romanian people.

The police, the Securitate, the military and every arm of the red-menacers was brought to bear against their peaceful fellow citizens for the crime of demanding freedom and democracy. Citizens were targeted, children huddling in groups on the cathedral stairs were sniped at and murdered, and bodies are strewn across this picturesque city. By every account the communists waged war against their own people rather than let go of their iron grip upon them. As in Tiananmen Square, communist tanks chased and ran over citizens they were obligated to protect just hours before.

These atrocities failed. As the regime deputized workers from across the region to go and attack the “terrorists and hooligans” in Timisoara, the truth became known. Those who arrived with truncheons were met by their own–resilient, weary and brave Romanians. They returned to their homes and spoke of what they saw inTimisoara. The fire of freedom spread to Lugoj, then Arad, and Cluj and Sibiu and Brașov; soon, the entire nation was alight with cries for freedom. The oppressors and thieves fled like cowardly thieves in the night, some met a just end, others escaped.

The United States honors Romania, and the Revolutionaries who paid an incredible price so that their land and their children would know real freedom. Their sacrifices were not in vain, Romania is free, their children know the outside world, and this nation is moving ever-forward to its rightful place as a European leader.

President Jackson stated that “Eternal vigilance is the price of liberty.” He was correct, and national vigilance in respecting the rule of law, demanding accountability from leadership, and ensuring that no communist elements, foriegn or domestic, ever again gain power in this country is the only way to honor the brave and respect their sacrifices. This is a sacred duty we all share, Romanians and their allies alike. This nation must finish the struggle that began three decades ago. The Revolutionaries, the people, the nation and future generations deserve no less.

That whistle has blown on this day for thirty-one years. Today, and every time that it does, Romania and the world must remember: