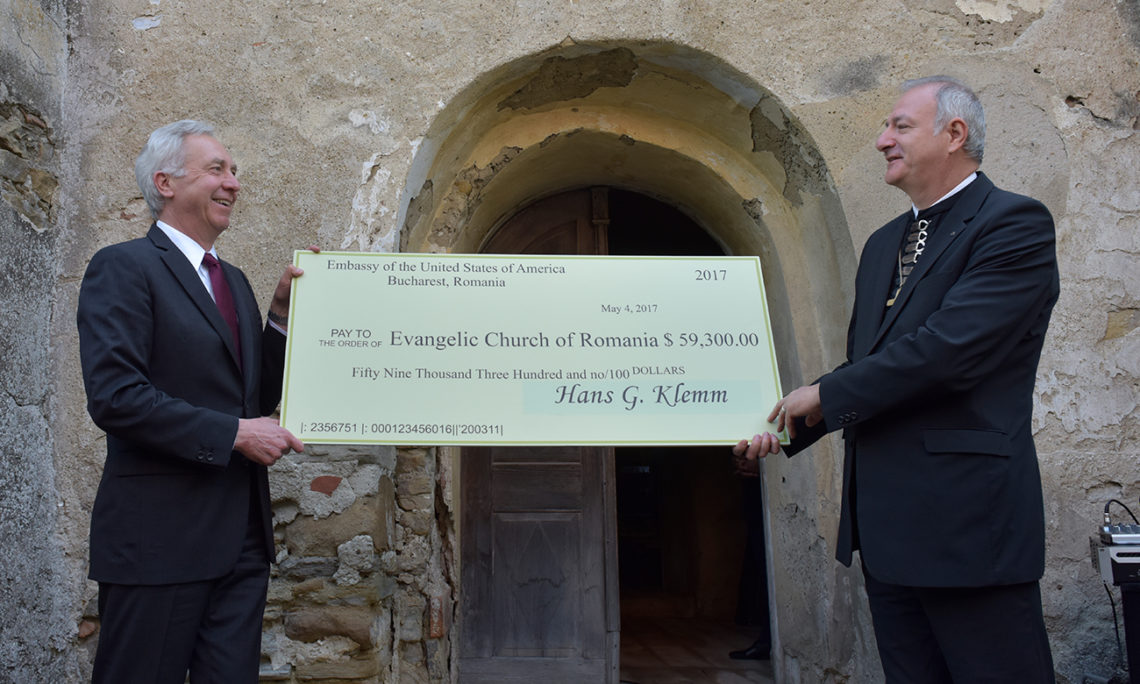 It’s a great honor, a delight for me to be with you this morning in Movile.

I have now been the Ambassador of the United States to Romania for about one year and a half. Of course, I am the Ambassador to all of Romania, not just Bucharest and I’ve made a very deliberate effort to visit as much of the country as I can, to get out of Bucharest, to meet Romanians in far ends of the country.

From the very beginning of my service in Romania I had the opportunity to visit Transylvania and start to be introduced to the Saxon communities, to the German heritage and of course, very much as you said, Bishop, the core to that tradition, that heritage, are the fortified churches throughout Transylvania.  I have been charmed and astonished, really, with the beauty of the churches that remain, but then also I recognized quickly that a great deal of investment must be made to preserve the churches and through the churches the history and traditions of the Saxon communities in Romania.

Of course, as you can tell from my name, I also have roots in German culture and in Germany, so that adds for me personally, not as an official of the United States, but for me personally, discovering the German presence, the German history, the Saxon communities in Romania, an added element of particular personal interest.  So, from the very beginning I have been very inspired by this aspect of Romanian history.

I also have the fortune for working for a Government and representing a country that has deep respect for foreign cultures.  A symbol of that respect is the Ambassador’s Fund for Cultural Preservation.

One of my priorities as Ambassador is to deepen the understanding between our two countries, Romania and the United States, our two people – Romanian and American people – and also between individual Romanians and the United States.  So, in order to do that we support Romanian tourism to the United States, we support Americans who wish to visit and discover the beauties, learn more about the history and traditions, culture of Romania; we have exchange programs in place, to improve the opportunities for Romanian students and scholars to visit the United States and advance their work and research, and also to bring American students and scholars to Romania to advance either their work or their studies in Romania.  But we also have this very modest program to invest in preserving cultural manifestation, cultural properties in Romania and countries around the world.  Again, the starting point for this is respect, that America respects the culture, traditions and history of Romania.  And from that starting point we are eager to invest in preserving cultural artefacts in Romania and other countries and from that starting point to improve the understanding between our two countries.

I mean this very, very sincerely: it is a great honor for me to be a partner of yours in all of your work to preserve the fortified church of Movile.  I am very, very pleased that America can make a small contribution to your efforts.