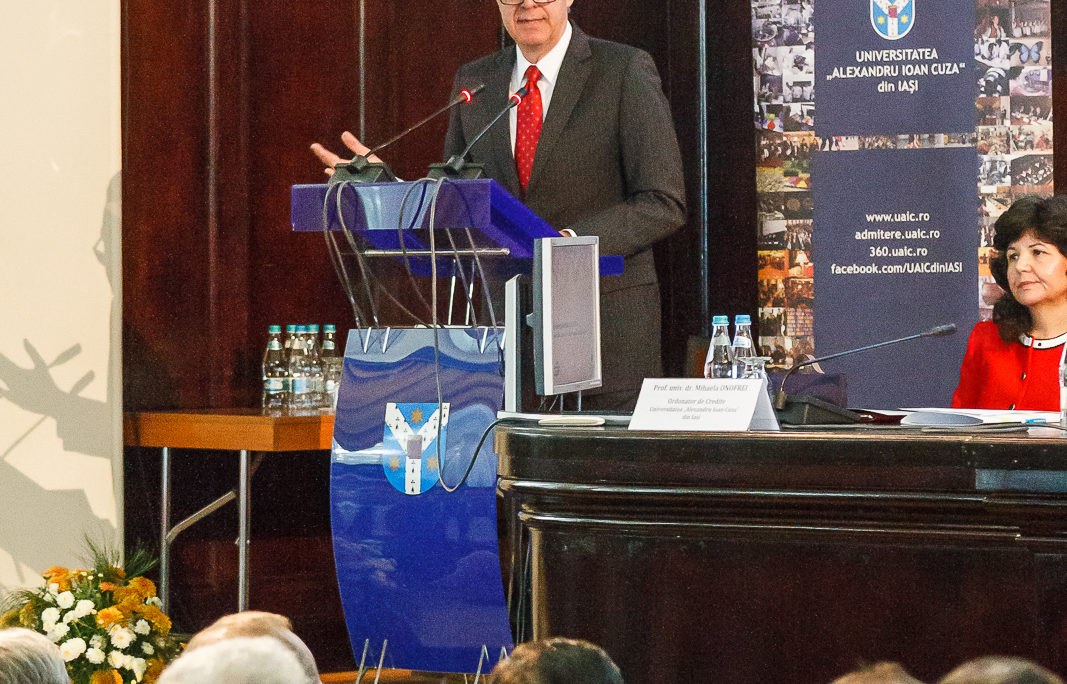 Ambassador Hans Klemm speaks at the opening of classes at Alexandru Ioan Cuza University in Iasi.

Thank you sincerely for giving me the opportunity to visit Iasi and visit the Alexandru Ioan Cuza University this morning to help celebrate the beginning of the new academic year.

I took some time to explore the presence in Iasi of some of my predecessors, former Ambassadors of the United States of America to Romania. Probably or arguably one of the most important periods in the history of Iasi were the years 1917-1918 when the Government of Romania found its capital here in Iasi and the Royal family, of course, resided here as well. During that time, the Ambassador of the United States – actually then the title was Minister of the United States to Romania – was a gentleman from Chicago named Charles Vopicka. He first arrived as Minister to Romania in 1913. He simultaneously was the Minister to Serbia and Bulgaria. He lived and worked in Romania throughout the years of World War I. After the German Army took over Bucharest in December of 1916, he stayed for a period in Bucharest although the Government had moved to Iasi, but then was expelled by the German Army and returned to the United States in early 1917. After a period of consultation in Washington he was instructed to come back to Romania, take up his duties again and because of the circumstances of the war at that time, he had to take a very, very long route, travelling first to the Western United States, across the Pacific Ocean, to Yokohama, up to Vladivostok in Russia, then finally back to Iasi. He arrived in Iasi precisely 100 ago today, on September 16th, 1917.

Iasi before the World War was a smaller city than it is today, not surprisingly, only of 90,000 people or so. However, by September 1917, that number had swollen to 300,000. That doesn’t sound so large because that’s the current population of Iasi, but the extra 210,000 people, they included those who had come from Bucharest to set up the Government here, but they also included nearly hundreds of thousands of refugees and wounded soldiers from the front both here in Romania, but also on the eastern front in Ukraine and Russia. Food was in short supply, water was in short supply, medical care was in short supply and unfortunately Ambassador Vopicka on arrival described the conditions in Iasi as saddening, very saddening.

I am very happy to be here in entirely different circumstances, when conditions on this fall morning are wonderful and I am very, very grateful to be here, in the footsteps of my predecessors.

To the students here today, facing the beginning of the new academic year, as Nicolae Iorga said, “Şcoala cea mai bună e aceea în care înveţi înainte de toate a învăţa.” (“The best school is the one which teaches you, first of all, how to learn.”) So, I encourage you to not only learn facts and formulas, but also how to think critically and make decisions that will improve the lives of others. Ask questions. Look for new solutions. Talk to each other; not only text each other, but talk to each other. Each generation is faced with its own challenges, and I am confident you will graduate with the tools to take the right steps when faced with challenges.

For my discussion today I was asked to highlight some of the educational exchanges that the United States supports in Romania. I am very grateful for this opportunity as these academic programs have brought tremendous benefit, not only to individual Romanians, but to both of our countries. And indeed, one of my priorities as the U.S. Ambassador to Romania is to strengthen the bonds between our two countries, our two peoples, and the understanding of our two nations.

American academic and research institutions reminded of the capabilities of Romanian scholars during the Communist era, when many Romanian professors, scientists, and intellectuals made their way to the United States, where they made significant contributions to the sciences and arts. One of those very distinguished professors was Matei Calinescu, who went to Indiana University, where I studied as an undergraduate and I had the tremendous opportunity – something that I will always fondly remember – of being Dr. Calinescu’s student.

In the 1990’s, following the Romanian Revolution, we expanded the number and types of exchanges. Since then, the U.S. Government has sponsored over 240 Romanians to take part in exchange programs paid for by the U.S. Government, from high school students to eminent scholars. The most famous of these is the Fulbright Program, which has supported more than 150 Romanian students and faculty to travel to the United States to take part in research, to share their knowledge with and to learn from their American counterparts, and more importantly, bring that knowledge and experience back to Romania. From Alexandru Ioan Cuza University alone, 23 students and professors have traveled to the United States as Fulbright grantees, to expand their horizons and bring our people closer together. One of those recently selected from the Alexandru Ioan Cuza University is Professor Corina Forăscu, who is now receiving through a Fulbright Romanian-American Foundation scholar award and is serving this semester as an entrepreneurship fellow in residence at the University of Rochester, along with five of her colleagues from other institutions in Romania. This is a new Fulbright program, designed only 18 months ago, with support from the Romanian-American Foundation, to send Romanian professors who are teaching entrepreneurship skills to the United States to learn and to help assist not only their studies but their ability to teach this skill.

The exchanges between the United States and Romania by definition have not just been one-way. We have been fortunate to have had 239 American students and professors come to Romania since 1992. Twenty-nine of those have come to Alexandru Ioan Cuza University, to learn from you, in fields ranging from medicine to business administration, from jazz to marketing.

While the exchange of individuals is important and critical to the strengthening of U.S.-Romanian relations, just as important is building bridges between educational institutions in our two countries. Universities in Arizona, Indiana, Georgia, and Michigan have formed relationships with institutions here in Romania, and Alexandru Ioan Cuza University has two such American partnerships, one with the University of Nebraska and the other with the University of Massachusetts.

Exchanges are not limited to the university level. In 2015, Romanian high-school students were able, for the first time, to apply for the Future Leaders Exchange Program. This program selects 25 high-school students from Romania to study at an American high school for one year, to live with an American family, and to see what life in the United States really is like. Due to the success of the program, we hope to be able to send an additional 10 students to the United States for the 2018-2019 school year, 10 in addition to the established 25.

So, while there is an important number of students and scholars moving between our two countries, I would like to do much, much more. These numbers still seem very small to me and in fact they are. If you look at where the United States ranks in terms of destination country for Romanian students, we’re only number 10 or 11. This is not surprising of course, given the distance involved, but also given Romania’s membership in the European Union and the benefits that it has accrued through programs such as Erasmus Plus. And of course Romanian scholars, Romanian professors are part of a European scholarly institutional network and enjoy the benefits of that network and its traditions.

So, what can we do to increase opportunities for scholars and students to participate in exchanges between our two countries? I am grateful that the Government of Romania shares my view that more can be done. In 2015, the Government of Romania took the decision to significantly increase its financial support for the Fulbright Program and as a consequence now we have about 60 students and scholars currently participating in the Fulbright Program.

Also, your government in 2015, took the initiative to suggest that we both create under the framework of our Strategic Partnership a new working group to look at how to increase the number of exchanges in the areas of science, technology, education and culture. The first meeting of that working group took place in September of 2016, just over a year ago, and we decided to do the following things. One was to explore the creation at a Romanian university of a junior year abroad program for American students. There are some 3,000 universities and colleges in the United States. Many, many, surely the majority of those institutions offer for undergraduate students an opportunity to study abroad for an entire academic year or at least a half of an academic year, at an institution overseas. And these programs have been developed over time with universities in Asia, in Europe and Latin America and to my surprise when I first arrived here, in Romania, I learned that there is no, 0 such program in Romania. So now we have begun to do some work to explore how such a program can be created.

We also are about to launch an initiative to secure private funding in addition to the contributions made by our two governments to the Fulbright Program in order to expand the number of opportunities that we’re able to grant to American and Romanian students and scholars. This past June, the United States sponsored a workshop here in Romania that included American and Romanian administrators of higher education programs – 11 professors from the United States came to Romania and 20 administrators from Romanian institutions joined the workshop, including from the University of Bucharest, here in Iasi, Timisoara, Brasov, Sibiu and Constanta. The goal of this workshop was to find ways to increase and prove the number of university-to-university partnerships, to increase the number of American students able to come to Romania. What was accomplished was guidelines for Romanian Universities on how to attract American students through ensuring that credits can be transferred, through the public listing of courses that are available in the English language, and guidance on developing short-term study abroad programs. Two professors from the Alexandru Ioan Cuza University participated in the workshop, Professor Henri Luchian and Professor Adrian Iftene. And also in September of 2016, the Government of Romania undertook to establish at its embassy in Washington a full-time position that will be dedicated to this work, finding ways to encourage Romanian students and scholars to go to the United States, American students and scholars to come to Romania and form productive relationships between American and Romanian colleges. Minister, I strongly encourage the rapid creation of that position at the University in Washington because that will be very, very helpful to our work.

Of course, exchanges are about more than just a classroom education: they open up new possibilities, new ways of thinking, new experiences, and new ideas. As Senator J. William Fulbright, the “father” of the Fulbright Program said, “In the long course of history, having people who understand your thought is much greater security than another submarine.” It is this understanding of each other, of the ways we think, of the ways we live, that is far more important than what is learned in the classroom.