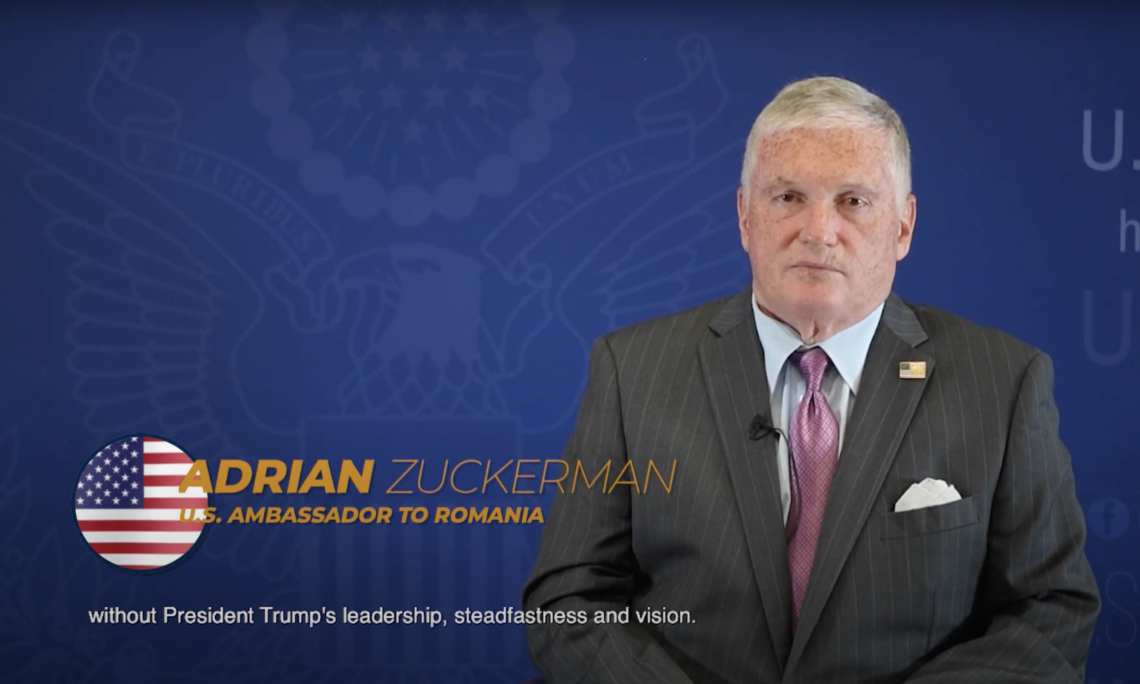 Hello everyone. I regret that I cannot be there in person with you for this forum. I am, however, in Washington D.C. finalizing several issues that will strengthen the ties between our two great nations for years to come. Though we are far away, I am confident that this year’s Bucharest Forum will be a great success. I wish to thank the Aspen Institute and the German Marshall Fund for organizing this event. I also want to thank my friend Mircea Geoana for his support of this event and support for Romania and NATO.

All my efforts on behalf of our two countries would have been impossible without President Trump’s leadership, steadfastness and vision. It is President’s Trump’s vision for Romania, and other European countries, to be strong economically and militarily. Countries with strong democratic institutions, subject to the rule of law and private free market economies, are defenders of the fundamental human rights and values that we share and value. I wish the President, and the First Lady, a speedy recovery from the scourge of COVID-19 that threatens all of us.

I also want to recognize the vision and leadership of President Iohannis and Prime Minister Orban’s government. Thank you for your unwavering pursuit of Romanian exceptionalism, peace and security. You forge the bonds that bring the United States and Romania ever closer.

I am currently in Washington, D.C. with Defense Minister Ciuca and Economy Minister Popescu to further strengthen the bilateral bonds between our two countries. Minister of Defense Ciuca and Secretary of Defense Esper are meeting today to sign a bilateral Roadmap For Defense Cooperation Agreement for the years 2020 to 2030. This strategic defense agreement will further confirm the United States’ commitment to assist Romania defend itself against malign foreign powers and preserve its border integrity.

Tomorrow, Minister Popescu will meet with Department of Energy Secretary Brouillette to initial an Intergovernmental Cooperation Agreement for the refurbishment of one nuclear reactor and the building of two new reactors at the Cernavoda nuclear facility in Romania. This $8 billion project will be a paradigm for future Romanian- American economic and energy development projects.

Later in the day, Minister Popescu will meet with the President and Chairwoman of Exim Bank, Kimberley Reed, to execute a memorandum of understanding for the financing of the Cernavoda nuclear project and other projects in Romania. The financing package is the largest financing package ever received by Romania to date and is indicative of the confidence that the United States has in its longstanding partner and Ally. The United States – Romania bilateral relationship has never been stronger.

The United States and Romania have accomplished much together. Romania stands upon the threshold of magnificent opportunities. As the United States and Romania continue to work together, we will see Romania assume its rightful role as a leader in Europe. Romania has and continues to demonstrate its indominable spirit as well as its unshakeable dedication to democratic values. This is Romania’s moment, and the new Romanian Renaissance is unfolding as we speak.

The Romanian people continue to unshackle themselves from the corrupt legacies of communist rule. Just two weeks past we saw another election that further distanced the nation from the red-robber barons that manipulated the law to fill their pockets at the expense of the Romanian people they were elected to serve. Romania is taking more of the steps necessary to attract the foreign investment needed for it to claim its rightful place at the forefront of an invigorated Europe. It is very clear, Romania is open for business, but it is not for sale.

Like every nation represented in this forum—and indeed every country in the world—Romania was ravaged by COVID-19. By now most of us know someone who has struggled to overcome this scourge, or we have lost someone dear to us to it. If this includes you, please know you have my sympathies. We will not forget our losses, nor we will forget our lessons. Both our countries are emerging tempered but stronger.

Romania handled this virus diligently and with a resolve to protect its citizens that earned it the respect of the United States and other allies around the world. It exported medical aid and staff to its neighbors and to the United States — thank you. The Romanian military led this nation’s efforts from the front, with the development and deployment of stretchers and ventilators, and with focused leadership. What the world saw was a nation fighting to save its people while assuming its proper place as a regional leader and a force that will help shape our modern and re-emergent world. Any country would be proud to call Romania a friend and ally, the United States certainly is.

As our countries and peoples emerge from this incredibly trying period, it is ever more evident that our futures our linked and we are both fortunate to have such stalwart Allies during these times.

Romania has found the voice which was stolen from it by the communists and is now a full-fledged member of the European Union and NATO, protecting its southern flank. In the sixteen years since Romania joined the Alliance, it has moved from a security-aid recipient to an exporter of security and a force to be reckoned with in the world’s most dangerous theaters. With NATO Multinational Division Headquarters South East, a NATO Force Integration Unit, and a fully operational Multinational Brigade, Romania does its share and more. The Aegis Ashore Missile defense site at Deveselu, which helps protect Europe from the threat of ballistic missiles and the recent acquisition of the first of seven Patriot missile batteries attest to the fact that Romania is prepared to protect itself and its allies.

Romania and Poland are the linchpins of NATO’s Eastern Flank. These countries share a common history of oppression from communism and Russian malign influence. They have long existed in a dangerous neighborhood and against incredible odds they now stand shoulder to shoulder against the same threats under a different flag, and say, “never again.” The multilateral interoperability these nations strive for and achieve is commendable. The examples are legion—from Polish companies manufacturing American helicopters that will be serviced in Romania, to the military exchanges among our nations, we stand together. Geographic realities doomed both Romania and Poland to a dire 20th Century; now they ensure these nations play a pivotal role in protecting freedom, European lives, and prosperity. Potential foes should be met with both olive branch and resolute force; Romania has the acumen to do both for the region and for Europe. Thank God for them both. As recent developments across the Black Sea have again shown us all, this region needs reliable and real NATO partners. Romania’s military modernization strides and commitment to meeting its Wales 2% pledge are a model for many other nations.

Romania’s resolute commitment to development, the rule of law, European security, and to its allies are readily apparent…to both friend and foe. Romania is subject to relentless propaganda campaigns and malign Russian and Chinese actions. Kremlin-controlled media and Huawei and its Beijing communist masters are stubborn and refuse to leave Romania to the democratic ways chosen by its people. Romania is a resilient ally. Romania sets the bar in Europe— through cooperation with the United States—in strengthening the security of Clean 5G telecommunications networks and infrastructure. We are now working with Poland and other NATO Allies to help them reach the Romanian level. All of our allies should follow Romania’s lead and ensure their citizens and economies are free of foreign subjugation and threat. When everything from transportation to military movements rely on shared networks, it is essential that these networks are Clean Networks constructed and maintained by companies from democratic nations that share our democratic values. Romania understands this.

Russia, China, and other malign actors seek to destabilize Europe and the world, they thrive where they sow discord and chaos. Russia and the ghosts of revanchism haunt Romania, and indeed all of Eastern Europe. Moscow is very slow to learn that the world will not accept its “spheres of influence” aggression and hybrid misdeeds. The world is watching, Brussels is watching, Bucharest is watching and most importantly, Washington is watching. The free world will not accept this malign conduct anymore.

Undergirding the new Romanian Renaissance is a blossoming economy that holds a magnificent potential. Modern infrastructure, ever-increasing corporate transparency, privatization, and the rule of law will unlock Romania’s true economic potential. Romania is blessed with the best deep water seaport on the Black Sea and ready access to northern and western European markets. As the EU adapts to new realities, Romania, a leading oil, and natural gas producer, stands ready to assert itself and to lead. Our nations are working closely together to further help Romania realize the potential of its vast arable land—the highest level per capita in the EU. With American irrigation know-how and technology, Romania will again become the breadbasket of Europe – the agricultural powerhouse it previously was. Romania sits upon vast deposits of copper, gold, magnesium and rare earth metals, and untold hydropower possibilities.

However, Romania’s most valuable resource is its educated and ambitious younger generations. The technology sphere is booming, and young Romanian programmers from Bucharest to Cluj have a global reputation for excellence. Romania is a model as a technology business incubator. It is already a regional leader, and with our strong partnership and support, it will be a leader in Europe and around the world.

Lastly, I must address Romania’s continuing steps to rid itself of the last vestiges of communist corruption and thievery. Tyrannical regimes stole lives, wealth, and aspirations. In doing so they caused pervading corruption. Unfortunately, no nation is free of corruption—but those under the communist heel for decades were forced to tolerate it to profound levels. With each conviction, each extradition, and each election Romania sends the clear message, the days of graft and buying elections and power are over. A free and great democracy on the borders of eastern Europe may be seen as a threat to malign neighbors, but we and your European allies could not be happier to see Romania takes its rightful seat at the table of democratic nations that respect the rule of law and disavow municipal, electoral, and grand-scale fraud. Every step forward increases the faith of foreign investors in Romanian markets and shows the world what an attractive talent- and resource rich nation it is.

In the span of thirty years, Romania has remade itself. From the smoldering economic ruins of the early 1990s to a European leader. Romania has shown the world that it is ready to shape a modern Europe and a modern world. The United States wholly supports Romania in this endeavor. Our Strategic Partnership has never been stronger – Romania has no better friend than the United States.