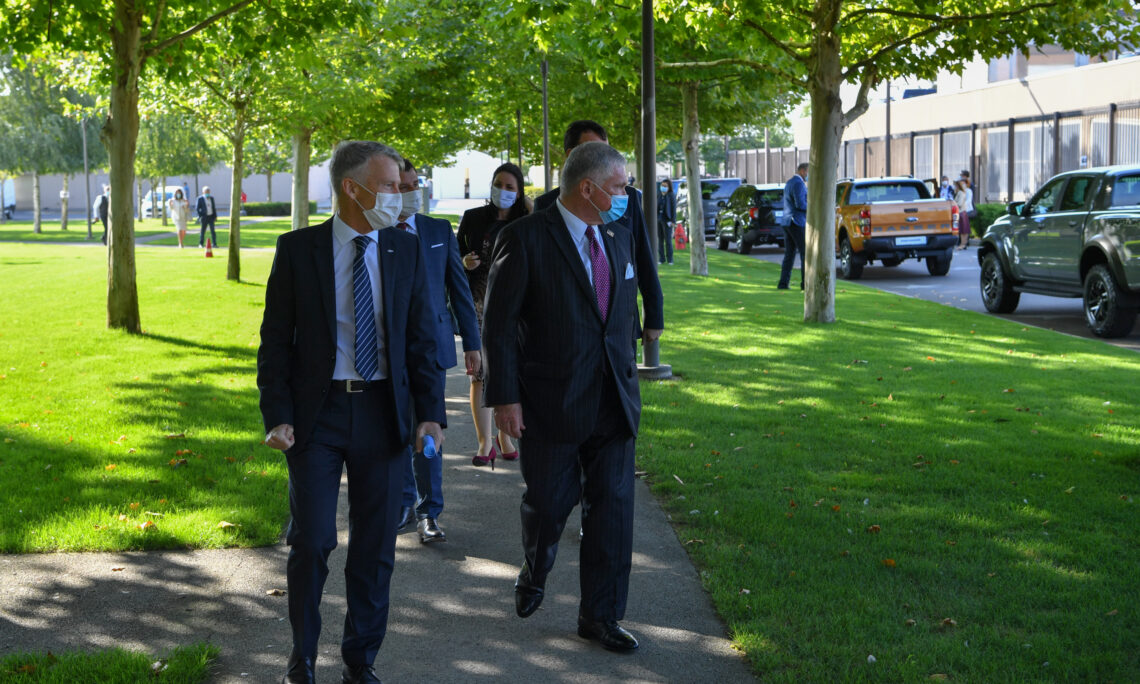 Along with my co-hosts Ford Romania President Ian Pearson and Ford Romania Managing Director Cristian Prichea, I am very pleased to welcome you to the American Embassy to celebrate the delivery of Ford’s customized vehicles to the Romanian Border Police.

Today we celebrate the ever-growing commercial ties between our countries. This is another example of American technology helping enhance Romania’s security and law enforcement. Our Strategic Partnership is alive and well and stronger than ever.

The U.S.-Romanian economic relationship has grown rapidly since 1989. U.S. investment in the Romanian economy now runs into the billions of dollars. Our bilateral trade alone exceeds $3 billion annually.

Few American or foreign brands rival Ford’s century-old heritage as a global leader in the automotive industry and its advanced manufacturing. With more than 6,200 employees and an investment of more than 1.5 billion euros over the past 12 years, Ford is among the top American companies operating in Romania. It is a major contributor to this Romania’s economic prosperity.

The automotive sector is nearly 14% of Romania’s GDP and 26% of Romania’s exports. Ford sets the bar in this sector not only as a manufacturer but also as an exporter; Ford exports vehicles to more than 50 markets globally.

Ford’s vital role in Romania’s national economy inspired the Prime Minister and me to visit its Craiova plant earlier this year. We had the pleasure to test drive one of Ford’s new fantastic vehicles, the Puma on its test track. They were truly world class vehicles. The Prime Minister and I had a little race challenge – it was a tie – although our security personnel were a little disconcerted. We will have to go back and drive one of Ford’s other vehicles to settle the challenge. Maybe we will have the Zuckerman – Orban Charity Race. We’ll see.

As Ford’s experts have and will explain, the vehicles you see here today are incredibly well equipped to increase the effectiveness of Border Police operations. The Romanian Border Police are an essential partner of the United States Department of Justice in combating trafficking in persons – which as you are all aware, is one of my foremost priorities – and in fighting cross-border crime. They also collaborate with our Department of State and Department of Energy in the international fight against terrorism, nuclear smuggling, and stopping the flow of counterfeit products and contraband. Without the Border Police, much of what we cherish would be under immediate threat. It is wonderful to see Ford’s innovations in action on Romanian roads and highways making us all safer. It would be great to see more Ford vehicles in Romanian security agencies’ fleets.

Ford, along with many other companies, are propelling the Romanian economy to new highs. Romanian manufacturing is increasing due to its skilled and motivated workforce. The Ford plant in Craiova is spectacular – it is a paradigm for an American – Romanian success story. It has built an enormous factory that builds some parts there and imports others to assemble its vehicles with Romanian workers.

Yesterday I was in Constanta to celebrate BSOG’s new gas pipeline to its offshore gas platform. Similarly, BSOG needs to be commended not only for its success with the pipeline, but for using virtually all Romanian content – from its workers to pipe, to ships to other integral parts in the project. Like Ford, this is the kind of joint venture between our two countries that yield enormous benefits to both. This is the paradigm for future growth and development.

None of these initiatives would flourish the way they have, were it not for private industry. Respect for the rule of law, the democratic process, stability and a thriving respect for private enterprise will bring in foreign investors and drive the Romanian economy to great heights. There is no one that has advocated and tried to implement these concepts more than the Orban government. By example, yesterday, the head of BSOG publicly cried out for reversal of the laws passed in 2018 that restricted oil and gas growth and development. These laws had impeded and continue to impede the growth and development of Romania’s gas and oil industry.

Romania needs predictable, stable free markets and private industry. The age of state owned planned industry ended in abject failure and its promoters were tossed out thirty years ago. Keep them out! The Orban government recognizes these values and is putting them into action to develop Romania and make it Great! Yes, I have said before, and I will keep saying it, this is the Romanian renaissance!

Now, I would now like to introduce my good friend, Prime Minister Orban.

Thank you for joining us here this morning and God bless you.