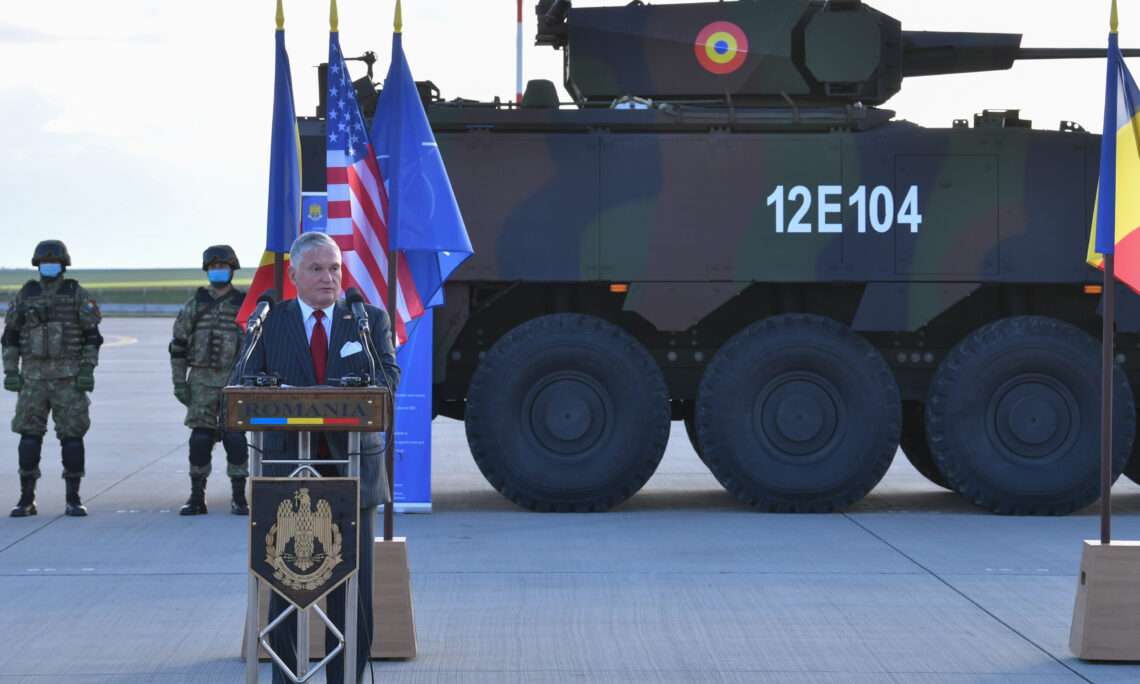 It is an honor for me to be here today to thank you for the great work you are doing keeping both of our countries safe. Mr Prime Minister, Defense Minister Ciuca, General Petrescu, General Berdila, your work to advance Romania’s national defense leadership and capabilities is first rate and second to none. For more than a century, the United States and Romania have steadily built a friendship marked by collaboration, loyalty and consistency. Today marks another milestone in the U.S.-Romania Strategic Partnership. We are not simply celebrating the demonstration of “just another piece of military equipment.” We are witnessing the continuing development of the era in which Romania can credibly defend itself and the NATO Alliance against all threats to its soil and citizens.

In just a few short months, Romania will receive its own HIMARS systems. Romania will be the first NATO Ally to receive and deploy HIMARS, yet again another reminder of how dearly the United States’ values its relationship with Romania. By incorporating the HIMARS system into its defense strategy, Romania solidifies its place as a guarantor of European and Black Sea security. HIMARS is a battle-tested, modern, superior surface-to-surface missile system that is primed to face the threats of the newest round of great power competition.

The HIMARS represents another important tool in Romania’s shield against emerging threats. It is also an integral piece in Romania’s defense modernization program which includes F-16s, Blackhawk helicopters, Piranha armored vehicles, the Naval Strike Missile, Maritime Domain Awareness, Anti-Submarine Warfare equipment and the Patriot missile system, which is the most advanced in the world. Additionally, and most importantly, additional U.S. military personnel are being deployed to Romania. The United States recognizes the importance of Romania, a steadfast and reliable ally, protecting the Black Sea

region and the eastern flank of Europe from malign Russian conduct and other malign influence.

To further this military cooperation the United States and Romania on October 8 signed a 10-year “Roadmap for Defense Cooperation.” The ties between our two countries have never been stronger. Romania’s military readiness and capabilities will continue to increase. The U.S. will continue to support the modernization and interoperability of Romania’s armed forces and continue to assist Romania to defend itself and the Black Sea region, including continued rotation of U.S. forces into the region. The United States and Romania are stalwart allies and will continue to strengthen their military capabilities and readiness with continued defense cooperation to ensure peace and security in Europe. The United States is committed to stand, and will stand, shoulder to shoulder with the people of Romania.

Today, we are also witness to the rebirth of Romania’s economic prowess and expanded research and development capabilities through the defense sector. A strong economy makes for strong defense capabilities and a strong defense protects a robust economy. A strong Romania means a strong Europe and security for our future generations.

The Strategic Partnership between our two countries has never been stronger. The United States will continue to assist Romania evolve as a regional and European leader. This is the year of the Romanian Renaissance. Under President Trump’s leadership the United States has assisted Romania achieve goals never contemplated before. President Trump’s “can do” attitude is contagious and is working. Romania has traveled far and overcome many challenges. Over the last year it has become a European leader in many areas.

The United States and Romania are cooperating on refurbishing one nuclear reactor and building two more at Cernavoda. This project is valued at approximately $8 billion. In addition to American, Canadian and French contributions, a substantial amount of the content for this project will be Romanian. This will be a tremendous economic boost for Romania. U.S. ExIm Bank signed an MOU to provide Romania up to $7 billion in financing for the Cernavoda project. The U.S. Development Finance Corporation will also provide financial assistance. The Cernavoda project is a paradigm for future collaboration between the United States and Romania in building major infrastructure projects.

Romania is already the second largest producer of oil and gas in Europe. Its Black Sea gas reserves are very substantial. Once gas extraction commences in earnest next year and fully develops thereafter, and after Cernavoda fully comes on line, Romania will become Europe’s biggest energy producer and exporter. What an amazing achievement. It’s all due to the new Romanian can-do attitude of the Orban Government redressing and modifying prior anti-development and anti-business legislation.

Additionally, we have started working on perhaps one of the most challenging infrastructure projects to date. A highway and a railroad that will go from the Black Sea to the Baltic Sea. Romania is undertaking this project in collaboration with Poland and the United States. When finished in several years, this multibillion project, that will traverse several countries, will be a major boost to the economies of Romania, Poland and the entire Eastern European region.

This major north-south spine will also connect to Romanian regional centers like Iasi and Timisoara. This will allow these cities to become competitive not just within Romania, but within Europe and the world. This desperately needed highway and rail project will be done because it needs to be done – it is the right thing to do. Romania can do it and the United States will help Romania do it.

This year, thirty years after ridding itself of the communist yoke, Romania has made advances in many other areas as well. It has determined to stamp out endemic corruption and human trafficking with a zero-tolerance policy. This shameful criminal conduct will no longer be a blemish on Romania’s people. Prime Minister Orban’s Government has implemented reforms to restore the rule of law where it was infringed upon by the prior government and to root out corruption. The endemic corruption and remaining red barons of communist years have no place in modern day Romania. They have locked up Romania’s resources and industry and kept Romania’s economic and social development back long enough. Romania is now stepping up to reach its full potential.

Romania is poised to be a European leader in agriculture, forestry, mining, intellectual technology, manufacturing industry and oil and gas. As the rule of law becomes the rule of the land, more U.S. and foreign investors are coming to Romania to bolster its economy. Similarly, as state-owned entities are privatized, the barriers to free market competition are further reduced as are the revenue sources sustaining endemic corruption.

Communist Chinese corrupt corporations and entities like Huawei, ZTE and others also have no place in a free and democratic Romania. Communist Chinese, Russian and authoritarian state control of cyberspace are the biggest threats to our existence. Romania knows the heavy price extorted from its people by its former corrupt communist regime and refuses to allow the same corruption to sap the life blood of its people again. Prime Minister Orban stated that “With respect to 5G, [China] cannot be our partner … We will choose a company that poses no threat to national security or other areas.”

Countries across Europe have followed the Romanian model and the leadership of Prime Minister Orban to safeguard 5G networks against untrusted, high-risk vendors like Huawei and ZTE. The United States and the EU have supported frameworks, such as the Clean Network program and the EU 5G Toolbox, to protect 5G infrastructure from high-risk suppliers. Given the far-ranging impacts of 5G technology, we cannot allow adversaries to have network superiority, easy access to our communications and control of global supply chains. We are committed to developing clean networks built by responsible companies that share our democratic values.

In closing, I want to again to praise this year’s Romanian Renaissance. It is just the beginning of Romania doing great things and achieving success economically, militarily and socially. Romania, and all freedom loving Romanians, need to have the courage to think big and have confidence in themselves that they will accomplish and achieve all of their big thoughts! The American people are here, and will always be here, to help. I will say it again, Romania has no better friend than the United States. Together, we can do it, together we have and we will continue to achieve great things.