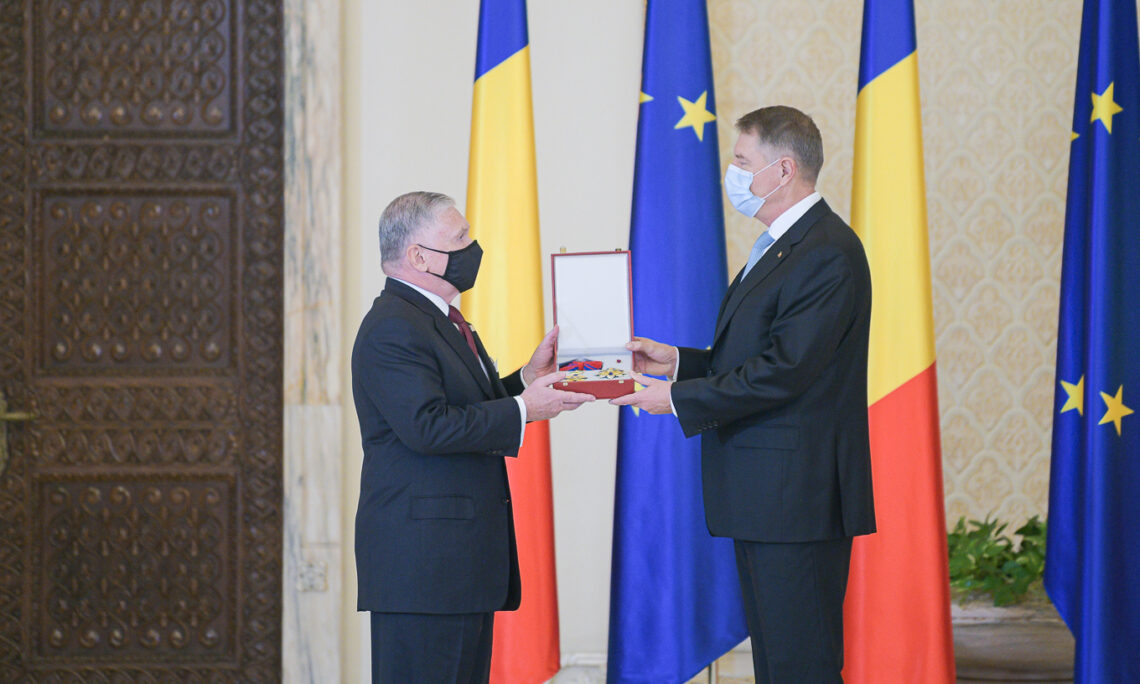 Thank you for this great honor. I am truly humbled and gratified by this award and the honor I have had to be a part of the great renaissance that is occurring within Romania. Romania is an amazing country, a country with a bright future, and unlimited potential.

Romania and the United States have a special bond, a special friendship that links our countries in greatness. By working together this past year we have reached new heights in military and security cooperation; we have advanced economic and energy development; and, we have worked together to advance the Rule of Law.

This year was not easy. We have endured hardships as we suffered through a global pandemic the likes of which has not been seen by the modern world. We stood together during these troubling times and helped each other. Now, with the recent development of vaccines that are being administered, and the strength and resolve of our people, the end is hopefully in sight and we can rebuild our lives and our economies.

In 1989, Romania threw off the yoke of communism and began its quest for freedom and a better future. The people of Romania rose up and proclaimed that they knew there was a better way. The path to a better future is sometimes long and difficult, but we will continue to work together to overcome these challenges. Romania has achieved much already. The people of Romania have chosen freedom and the Rule of Law over the leftover remnants of communist cronyism and corruption. The new coalition government will bring long-needed stability and continuation of the growth begun last year.

I love the country of my birth and have been blessed to be able to come back to help Romania achieve greatness. From the first day of my appointment as the United States Ambassador I pledged to do everything I could to advance the bilateral relationship between our two great nations – and this past year we have achieved momentous things.

We have achieved much in the past year, but the journey is not over. Together we will do more. Romania’s commitment to free markets, economic development and the Rule of Law ensures a bright future.

Cities throughout Romania, like Cluj, Oradea, Iasi, Timisoara and Bucharest, are models of growth and development. Free market competition and the Rule of Law will bring wealth and prosperity to everyone and will elevate Romania into an economic powerhouse.

I am confident that with you, President Iohannis, Prime Minister Citu’s coalition government and a like-minded Parliament, Romania will continue to build on the progress made over the last year. I urge all Romanians to continue this journey and to have the courage to strive to reach their full potential.

Romania has no better friend than the United States – we are – and always will be – your partner on this journey forward.

Lastly, I want to thank President Trump, for his leadership, vision and faith in me to serve him and the American people as the ambassador to the country of my birth.

Thank you once again Mr. President for this incredible honor you have bestowed upon me today. It has been the honor of a lifetime to serve as the United States Ambassador to Romania.