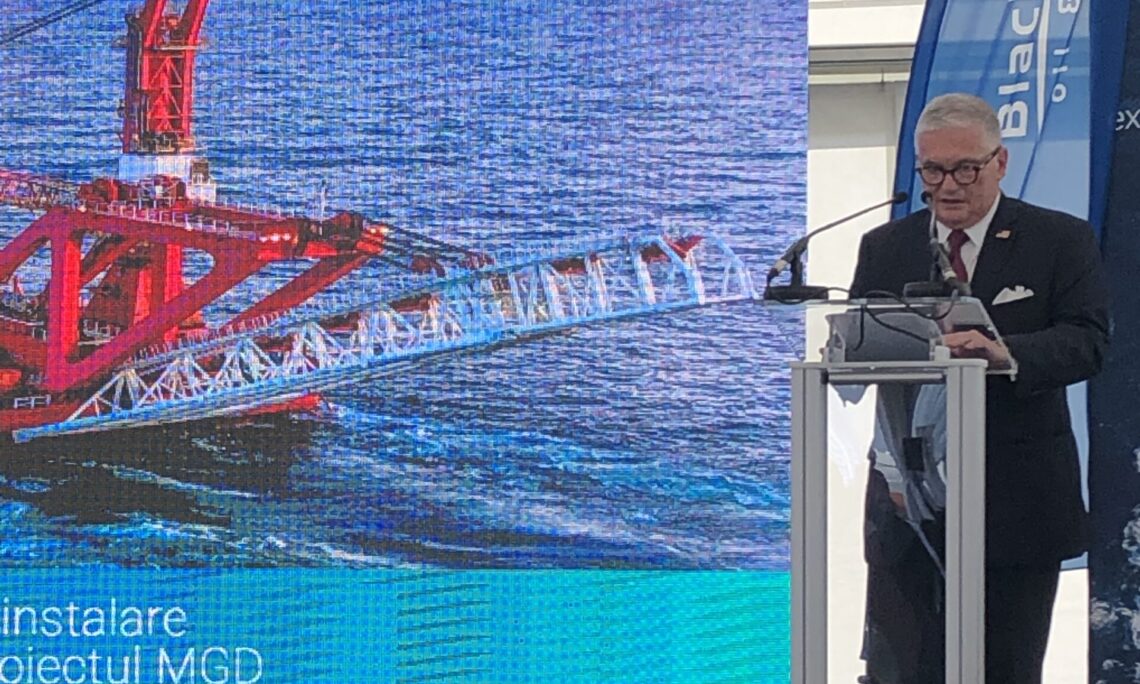 Today we mark one of Romania’s most important strides forward in developing its Black Sea natural gas resources – a national treasure with the potential to transform Romania into an energy secure and more prosperous country. It also marks an important step toward achieving energy security for Europe. During the past seven years, Mark Beacom and the Black Sea Oil & Gas or BSOG team have been working hard on this project. I am very pleased to see this strategic and pioneering project moving forward. The start of this operation to lay pipe offshore is the most significant milestone for any U.S. energy company in Romania.

Two globally renowned investors back the project: the Carlyle Group, through its Carlyle International Energy Partners Fund (CIEP), and the European Bank for Reconstruction and Development (EBRD). This is another milestone in Romania’s economy. I commend BSOG and its contractors for persevering and achieving great progress despite the challenges created by the pandemic. This project is a key pillar of the U.S.-Romania Strategic Partnership. When President Trump hosted President Klaus Iohannis on his second visit to the White House in August 2019, strengthening our energy cooperation was one of the key topics. In a joint statement, the leaders reaffirmed our Strategic Partnership and agreed to prioritize two energy-related areas.

First, energy security. Our countries underscored the joint opposition of the United States and Romania to Nord Stream 2 and our efforts to provide greater energy security for Europe and to reduce dependence on Russian gas.

Russia is enacting its plan to dominate and control Central Europe’s energy markets through a web of infrastructure. Moscow uses natural gas to politically blackmail and coerce vulnerable governments throughout this region. It seduces greedy politicians and manufactures billionaire oligarchs to do its bidding across Europe – from the continent’s largest economies to its smallest and weakest countries. It has cut gas transit through Ukraine to threaten markets who depend on it and pursues pipelines such as NordStream 2 to starve Ukraine of vital state revenues. It bullies the Moldovan government and puts the welfare of its people at risk in winter when lack of gas would mean certain death for many. In Greece, Russia’s partners have grown tremendously rich and seek to expand their network and influence throughout the region.

Romania is an island of freedom gas surrounded by a sea of Gazprom. In this audience today, I am proud to stand with BSOG and many others who have worked to keep it a bulwark against such forces. The tentacles of Moscow reach through Ukraine, Moldova, Hungary, Serbia, Bulgaria, Greece and Turkey – all national economies and commercial relationships that perilously rely on Russian gas.

Second is the need to improve Romania’s business and investment climate to attract more investment. These improvements are extraordinarily important to fostering the domestic and foreign investment climate necessary for projects such as this one to move forward. I applaud the Prime Minister’s leadership in the development of onshore and offshore gas development. I welcome the efforts of all those who understand the importance of energy security and legislative predictability and stability to making Romania’s economy vibrant.

The security of this region, and achieving energy diversity, are critical U.S. interests and major areas of U.S.-Romanian cooperation. Romania is a vital NATO Ally in Central Europe and along with Poland, it forms the linchpin of the Eastern Flank. It supports our mutual security and a Black Sea region free of aggression.

With an estimated annual output of one billion cubic meters, BSOG’s Midia Gas Development will contribute to energy security by ensuring diversification of sources of gas and reducing dependence on Russian gas imports. This gives great relief and hope to those who grew up under Moscow’s oppression and dreamed as I did of a Romania that could throw off the shackles of communism to achieve freedom and prosperity for its people. Americans and Romanians who work together to counter Russia’s use of natural gas to politically blackmail vulnerable governments in the region join us in celebrating today.

The United States remains committed to supporting Romania’s national security, which rests on its energy security. BSOG will play a significant role as a natural gas producer and contributor to regional energy security. This project continues to require trust and mutual commitment – from the country and from the investor. Romania has shown its commitment to a strategic infrastructure that will diversify natural gas sources, including the Bulgaria-Romania-Hungary-Austria or BRUA pipeline and the pipeline that will feed the gas from BSOG’s onshore gas treatment plant into the system.

America and the American people support you and appreciate every milestone you reach on the journey that is the Romanian renaissance. BSOG is not just laying pipe today. This pipe is essential infrastructure for guaranteeing Romania’s future prosperity, the security of this nation and that of its neighbors.