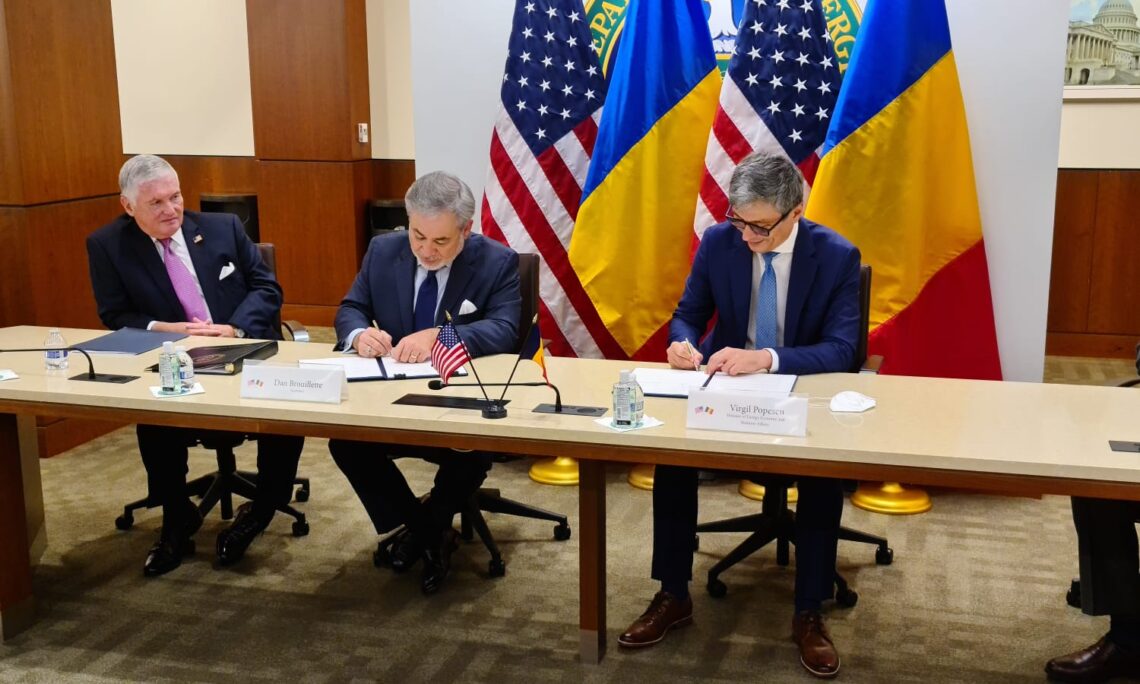 It’s great to be here finally – to initial this Intergovernmental Agreement. Some people say we got here quickly, I say we could have done quicker!

This is a tremendous step forward for democracy, the rule of law and free people around the world. Energy independence drives economies and allows countries to unshackle themselves from Chinese and Russian malign influence. There are a lot of individuals and companies to thank for our achievements today. We would not be here without the contributions from each and every one of them. Please forgive me for not naming all of you.

First and foremost I want to thank President Trump. The President’s vision and steadfastness in achieving security and prosperity by helping our allies become economically and militarily independent is being achieved. Not only are we bolstering Romania’s safety, border integrity and freedom with increased military assistance and support, but we are assisting to develop Romania’s economy and infrastructure with projects such as these. The Cernavoda nuclear development project, the refurbishment of one reactor and building two new reactors, is the paradigm for the future.

The Department of Energy has led the effort for Cernavoda. I cannot thank Secretary Brouiellette, Ted Garrish, Aleshia Duncan, and the rest of the DoE team, enough for their incredible hard work and support. I remember my first telephone call with the Secretary shortly after I arrived at post in December 2019. I had a lot of questions, I did not understand where or how the project was going, or even if it was going. The Secretary also asked me a few questions – I had no clue what the answers were. The best I could come up with, as I recall, was to tell him “Here is what we are going to do – I will run the project from here and I will get back to you on the other stuff.” I was shocked when he said ok. The head of my Econ group, Ernest Abisellan, looked at me like I was crazy – – he wanted to know if I knew what I was doing, but we clearly figured it out.

I also want to thank Paul Murphy, our financial structuring advisor. Great work! It has been an absolute pleasure to work with such a tremendous group of skilled, hard-working and dedicated professionals.

I want to thank the State Department team helping on this project. The counselor, Ulrich Brechbuhl, Chris Ford and Marik String were invaluable closers. Also, the NSC European experts have been invaluable, especially Ryan Tully and energy expert Ricky Gill, whose understanding of crucial energy issues was instrumental.

I want to also thank Secretary Pompeo and Under Secretary Keith Krach for their vision, persistence and articulation of the perils posed to the free world by the communist regime in Beijing. The communist party’s control of every Chinese company, domestically and abroad, poses an existential danger. Romania no longer has to fear such danger as it terminated its agreement with CGN, in March of this year, to rebuild Cernavoda. CGN, like Huawei and other communist Chinese companies, was indicted for its corrupt business practices. Now we have a great clean American company, AECom, leading this $8 billion project, with assistance from clean Romanian, Canadian and French companies. This is energy independence. This, my friends, is the paradigm for the future. This is happening due to President’s Trump’s leadership and his team implementing his vision.

None of this could have happened without a forward-looking democratic government in Romania that believes in free enterprise. President Iohannis and the government of Prime Minister Orban, in a little less than a year, have made Romania one of the United States’ closest allies. Under the Orban government steps have been taken to strengthen the rule of law, develop infrastructure and advance economic growth.

Romania welcomes many of our latest weaponry systems, like Patriot missile batteries, HIMAR rockets, Aegis antiballistic missile systems, and various other systems. Soon it will also host many more of our service men and women. Romania, along with Poland, is the defense lynchpin against Russian aggression on Europe’s eastern flank.

Romania has also supported all of our economic and technology initiatives from clean network 5G to bio technology. Romania is a leader in regional oil and gas production, mineral extraction and agriculture. Romania has supported the United States in every world forum where it participates. Thank you. This project will be a big step forward for the Romanian economy and Romanian energy independence. It would not have happened without the drive of, Economy Minister Popescu, who is here today, other members of the Orban government and Cosmin Ghita, the head of the Romanian nuclear company. The United States could not have a better friend than Romania.

I also want to thank my entire embassy team for working so diligently on this project. Ernest Abisellan, Brad Stilwell and my new DCM David Muniz have been exceptional. I apologize to them, and some others, for my emails at all hours of the night, and sometimes phone calls as well. However, they have the weekend off, I won’t be back until Sunday. Sadly for them, we are now embarking on a new project for Romania, with Poland, to build a highway and railroad from Constanta on the black sea to Gdansk on the Baltic Sea. This Infrastructure project will be a tremendous boon to the Romanian and Polish economies, and regional economies, for years to come.

Lastly, I want to thank President Trump again for his vision and support for Romania. I also want to thank President Iohannis and Prime Minister Orban again for their support and leadership. We have found in Romania an ally, friend and partner that shares our democratic values, freedom, exceptionalism and resolve to make tomorrow a better day for both of our countries.

Thank you and may God bless you.