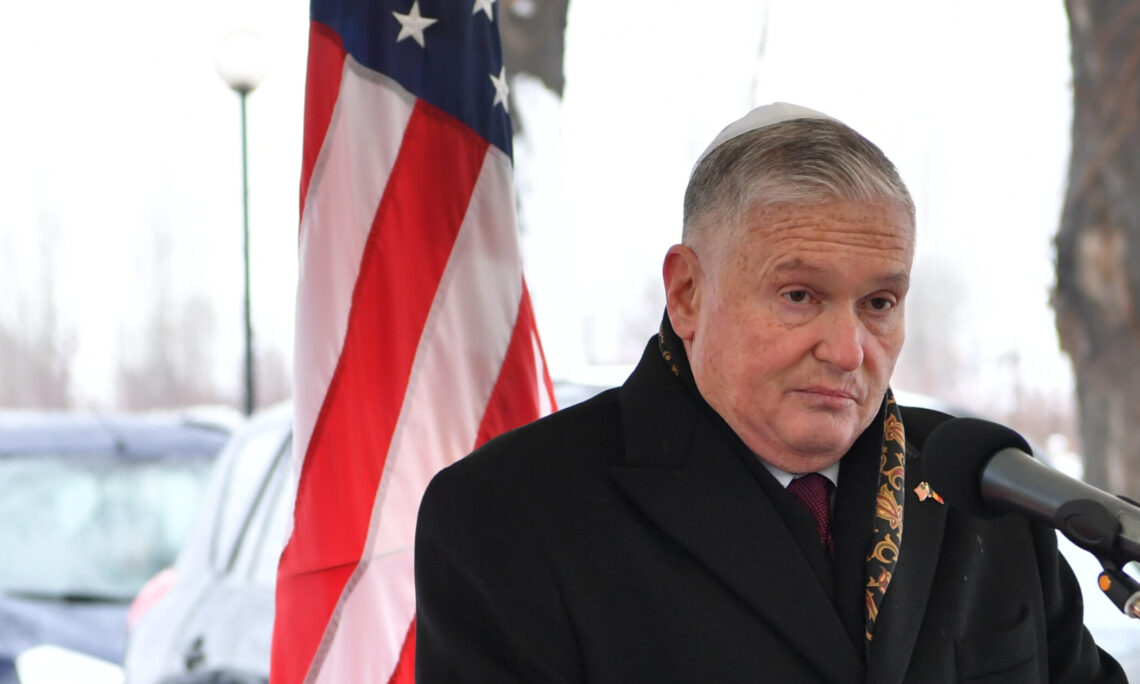 Maria, you have my heartfelt condolences. My thoughts and prayers are with you. The American flag at our Embassy has been flying at half mast in honor of Iancu, a true Romanian hero.

Ministers, Ambassadors, Distinguished guests, friends, thank you for joining us today to say goodbye to this Romanian patriot and celebrate his life.

I am absolutely devasted to be here today. We celebrated Iancu’s 98th birthday a short two months ago. I still remember meeting Iancu for the first time at the home of German Ambassador Cord Meier-Klodt a year ago. We bonded immediately – he was a man full of wit, energy and humanity. Iancu suffered more than words can ever describe. Yet, despite it all, he was the embodiment of dignity, decency and love for humanity, for his people and for his country. Iancu was a patriot and a model for us all.

Iancu was a survivor of the Iasi death trains. He was a kind soul, an agronomist, a farmer and was also a violinist in the Ministry of Agriculture’s orchestra. Through it all, he never lost his passion for life or music. He supported promising young musicians. Iancu shared his love for music, and his profound knowledge of it, with the listeners of his weekly radio classical music program.

Iancu was the victim of antisemitism both under the Iron Guard and then under the communist regime. In the lovely city of Iasi that is now the nation’s cultural capital, he was marched to a death train for the crime of his faith and his culture. In 1941 he and 147 other innocents were herded onto a train car meant for 40 people. Iancu was one of only eight who survived. The rest joined thousands of other Jewish Romanians, murdered and dumped into mass graves. Iancu was condemned to death, survived beatings and saw murder all around him. He was deprived of his humanity and denied a proper and timely education because he was a Jew.

Under the communist regime, antisemitism was rampant. You were not allowed to talk about the Holocaust. Life would have been far easier for Iancu had he joined the Communist party, but he refused. He saw how morally corrupt and murderous the communist system was. This refusal stands in powerful testimony to his character. Iancu chose to speak about the Holocaust when it was forbidden, without thought to his own safety, he chose the side of right and justice and dared to speak the truth. In his own words, he was motivated by a fear that it could all happen again, if we do not educate others about it and if we ever forget.

We cannot and we must not forget the Holocaust – ever. We must always remember its evils. There are times when I wonder if we have already started to ignore the lessons of our collective history. We cannot turn a blind eye to the current-day horrors in other countries, including China. The Communist Chinese continue unabated with labor camps and re-education camps. Tibetans, Uyghurs, other religious minorities and dissenters of the communist system are sent to labor camps, re-education camps, prisons or simply disappear. Recently, xenophobes, anti-Semites and anti-minority groups have become more prominent in Romania. These people shock the conscience of all decent Romanians, Americans and the world. Let us not wait for the next holocaust – reject this hatred now, otherwise we are all at risk. Our very existence, values and the respect for the dignity of each and every individual is in jeopardy.

Romania and America will continue to work together to protect the rights and freedoms of all people, regardless of who we are or where we come from. Hatred and bigotry have no place in our society. We, like Iancu, have to put our faith in education to better our human condition. We need the evenhanded application of the rule of law to avoid repeating the horrors of the past. God help us all if we forget and God help us all if we become too complacent to speak up when such evil begins to rear its ugly head.

America and Romania share the same moral values and compass. We will achieve and preserve our democratic values and enforce the rule of law together. We must not forget the atrocities of the Holocaust and the horrors that continue in some parts of the world today. Do not let the haters and the bigots allow those horrors to take a foothold in Romania. I urge you to remember Iancu and have the courage, like he did, to do what is right and just.

Iancu, my friend, you have been a model and an inspiration for all of us. May you rest in peace. I will never forget you.