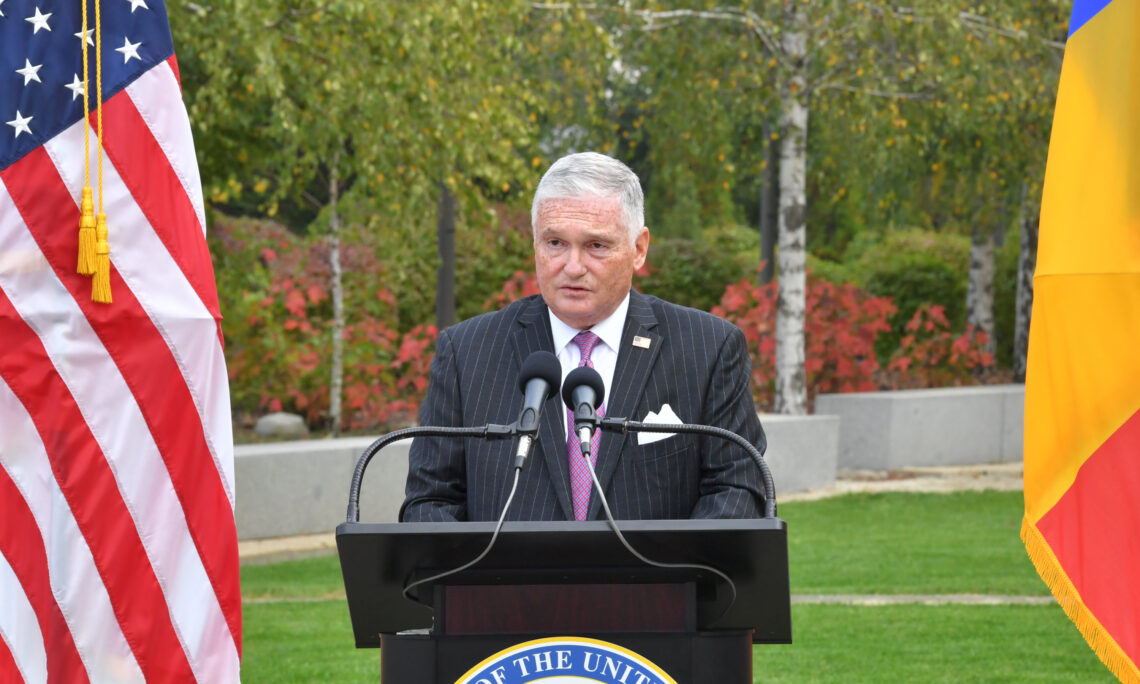 Welcome to the Embassy of the United States. I want to especially welcome Justice Minister Predoiu, General Prosecutor Scutea and State Secretary Despescu. We are here today to announce another step forward in fulfilling the commitment I made earlier this year in June. I promised that the United States would use every available resource to assist Romania to end the scourge of human trafficking and help the victims of this horrific crime. We have kept our promise. We are Romania’s partner in this endeavor and will remain by your side in fighting this affront to human dignity.

Human trafficking takes its toll on every one of us. It is a world-wide evil that cannot and will not be tolerated – human traffickers must be prosecuted to the fullest extent of the law, their ill-gotten gains seized, their victims rescued and potential victims protected. There will be no sanctuary for those who profit from human misery and traffic the vulnerable.

Since my arrival in Romania last December, I have been meeting regularly with the Minister of Justice and Minister of Interior, as well as others in the government of Prime Minister Orban, working together to fight human trafficking. I am confident in the Orban government’s commitment to eradicate human trafficking from Romania. Unfortunately, it inherited a system of ill-conceived policies, corruption and criminal networks that hindered its every move. This government has been working diligently, with assistance from the United States, to correct the malfeasance of the past.

I am proud that under the leadership of President Trump, the United States is committed to assisting Romania in this fight. We will use all available law enforcement assets from the U.S. Department of Justice and Federal Bureau of Investigation to help Romania track down and bring to justice those who exploit their fellow human beings. Towards this end, I am delighted to announce the United States Government has provided a grant of $600,000 to the International Justice Mission to combat human trafficking.

Since its creation over 20 years ago, the International Justice Mission has been instrumental in the fight against human trafficking. From rescuing teenage girls forced into prostitution in India to helping young boys in Africa escape slavery, IJM is now ready, with assistance from the U.S. government, to bring its substantial experience to aid Romania.

IJM will help the efforts against human trafficking in several ways:

My sincere thanks to Interior Minister Vela, Justice Minister Predoiu, Labor Minister Violeta Alexandru, General Prosecutor Scutea and State Secretary Despescu for their relentless efforts in this fight. You kept your promise to the Romanian people. Thank you also to IJM, Shawn Kohl and to all our partners who are a part of this important project. Together, with a shared sense of mission, we will defeat the human traffickers and protect those who otherwise would become their victims.

I commend the efforts of the government to combat human trafficking. Previous governments chose to ignore and delay investigating and prosecuting human trafficking cases, but even with the added challenge of a global pandemic, the Orban government kept its eyes locked on the problem and is making progress.

There have been many recent successes in Romania in tackling organized crime and human trafficking cases. For example, prosecutors from the Directorate for Investigation of Organized Crime and Terrorism (DIICOT), together with judicial police officers from the Directorate for Combating Organized Crime (DCCO), have arrested a number of people involved in organized crime groups that engaged in trafficking human beings, pimping and money laundering. These people promise jobs to young women from mostly rural areas of Romania and then entice them into prostitution locally and internationally. These criminals also use threats and violence to force women and minors into prostitution. These efforts by law enforcement are to be applauded.

While Prime Minster Orban and his government have made great strides in eradicating trafficking, the problem is too big for any one organization to deal with alone – more must be done. The damage done by the former government to the criminal code must be remedied forthwith. This is not a political issue – members of all political parties should be united on the issue of human trafficking. Human trafficking is a universal evil that all of us – regardless of political party – should commit to ending. Parliament must enact legislation to increase penalties for human trafficking, expedite prosecution of traffickers and help law enforcement seize human traffickers’ ill-gotten gains. Human trafficking is a gross human rights violation which is incompatible with freedom, the rule of law and human dignity.

It is also imperative that we assist the victims of human trafficking. The victims have experienced untold horrors and desperately need our help. They need tangible and continuing support so they can return to the lives they deserve and never again fall prey to the lowly and despicable criminals who would exploit them. They also need essential professional services …be they medical, psychological or spiritual. The government must ensure that existing facilities meet basic standards and are staffed by skilled, trained professionals who can provide the best possible care to victims and new facilities are built and staffed to meet the demand.

A key partner in this effort is the Orthodox Church and Preafericitul Daniel. They are working to create more shelters for victims of trafficking. We are grateful for Preafericitul Daniel’s ability to recognize this need and his work to provide assistance to trafficking victims. We are also grateful for the great work of Minister of Labor and Social Protection Violeta Alexandru for her assistance and efforts on behalf of trafficking victims.

On behalf of President Trump I want to again applaud Prime Minister Orban and his government for their efforts to combat human trafficking in Romania. Romania has no greater friend than the United States, and as long as we continue to work together, we will succeed.