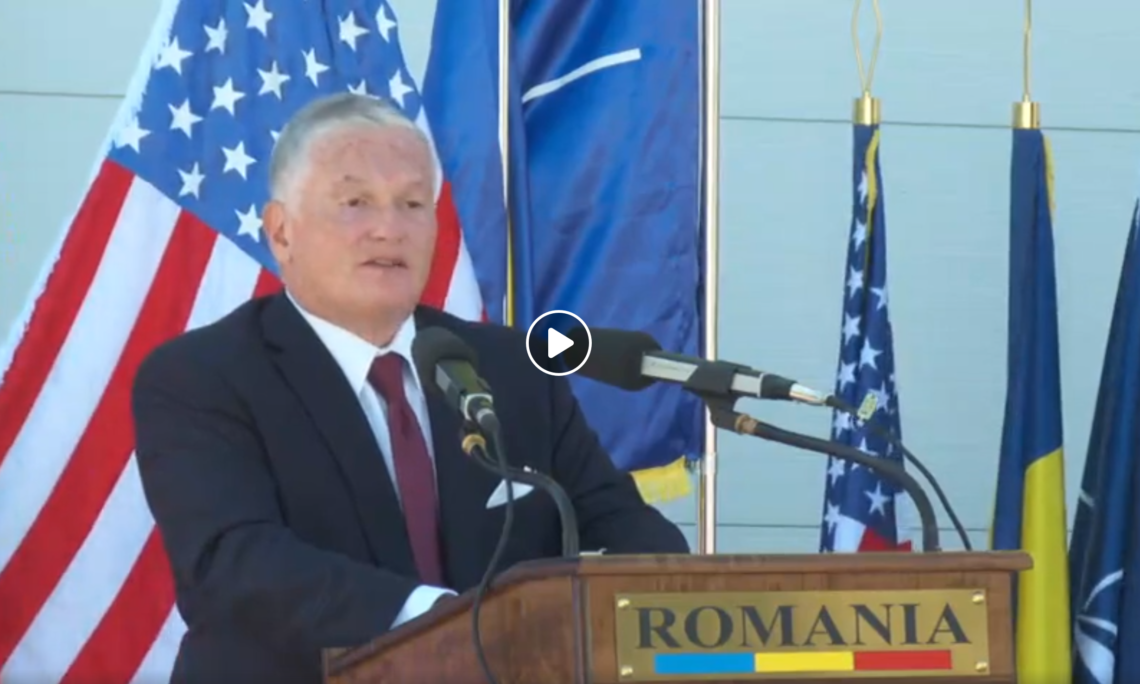 For more than a century, the United States and Romania have steadily built a friendship marked by collaboration, loyalty, and consistency. But most importantly by mutual respect and a rock-solid commitment to the preservation and advancement of our two great nations.

Today, marks a milestone in the U.S. – Romania Strategic Partnership. We are not simply celebrating the delivery of “just another piece of military equipment.”

No, instead we are witnessing the dawn of a new era in which Romania can credibly defend itself and the NATO Alliance against ballistic missile threats to soil and citizen.

We are also witness to the rebirth of Romania’s economic prowess and expanded research and development capabilities through the defense sector.

By welcoming the delivery of the Patriot hardware, Romania solidifies its place as a guarantor of European and Black Sea security.

The Patriot is a battle-tested, modern, and superior air defense, surface-to-air missile system that is primed to face the threats of the newest round of great power competition.

Romania is at the tip of the spear being the first partner in the Black Sea to host the Patriot system.

The Patriot represents one of Europe’s greatest shield’s against emerging threats. It is also an integral piece in Romania’s defense modernization which includes F-16s, the Naval Strike Missile, Maritime Domain Awareness, Anti-Submarine Warfare, and HIMARS mobile rocket artillery. All of which of are buttressed by Romania’s respected training centers, military educational institutions, and human resources management.

My generation lived with the fear of ballistic missiles hanging over our heads like dark clouds, threatening the extinction of all mankind. With the end of the Cold War, the missile race seemed to have ended, and the world breathed easier. But while the Cold War is over, the missile threat has not gone away.

Europe is facing security threats unseen since the Cold War. The constellation of threats abounds from the north, south, east and the west.

Russia and China are pursuing missile capabilities to dominate the West and undo the rules-based order which has sustained global peace and stability for more than 50 years. Terrorists and extremists seek to create instability from their Middle Eastern havens through brash attacks on European soil and the harnessing of missile and other technologies. Rogue nations also lie in wait.

Europe and Romania must stand strong and oppose those who would threaten Europe’s peace, security, and territorial integrity. The Patriot system puts the regional balance of power back into closer parity with our shared threats.

The United States stands strong with Romania, one of our greatest transatlantic and NATO Allies in this harrowing mission.

Ladies and gentlemen, today you are witnessing the making of history and the embodiment of enduring transatlantic bonds.

A strong Romania means a strong Europe and security for our future generations.

Romania has no greater Ally than the United States. Thank you and God bless.