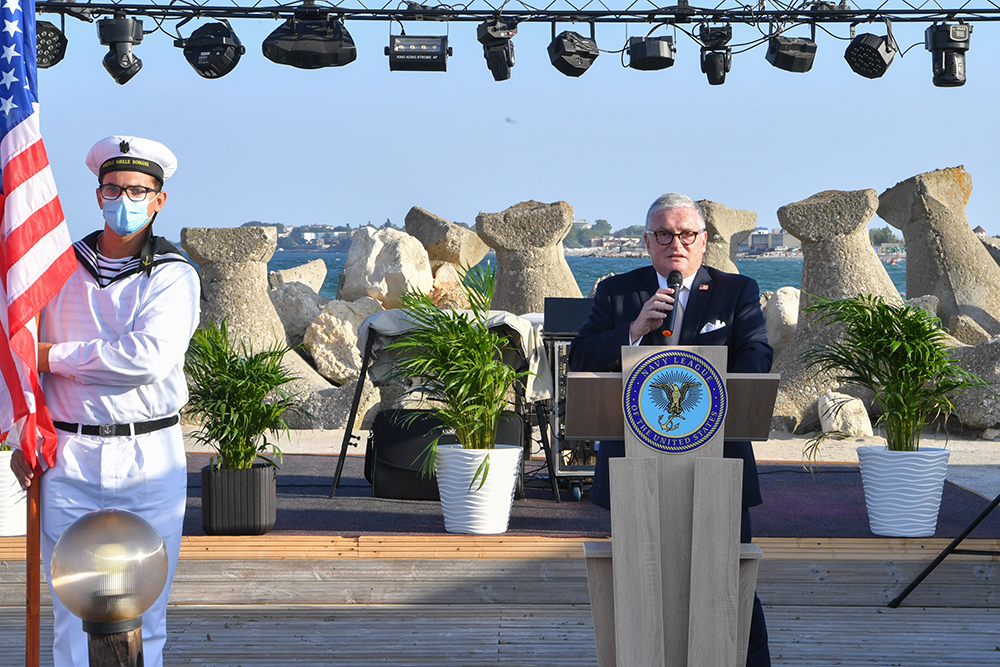 Good evening everyone, Mr. Mayor, Mufti, Colonel Vaughn, distinguished guests and friends. Its an honor and true pleasure for me to be here with you tonight. Thank you, Mr. Patrichi, for your staunch support of the U.S. Navy League and for your invitation tonight. I commend your encouragement of ethnic, cultural, and religious diversity in Dobrogea which has achieved a more prosperous, cohesive and peaceful society. I am grateful to be able to celebrate with you the multicultural Constanta community, with its special mix of languages, heritages and cultures, and to also celebrate with you the special partnership and friendship between Romania and the United States. Romania has no better friend than the United States. President Trump and I also recognize that the United States has no better friend than the people of Romania.

The U.S. Navy League is a devoted proponent of the United States’ Navy, Marine Corps, Coast Guard and Merchant Marine. I have always appreciated the many traditions of seafarers, and I particularly admire the longstanding tradition of mariners to render assistance to anyone in distress at sea. This aid is offered without any regard to race, nationality, religion, or any other factor. It is done, in fact, in recognition that people at sea must rely on each other for the safety and well-being of all.

This shared ideal to help those in distress is especially pertinent during the current COVID-19 pandemic, a challenge that faces the entire international community, a challenge we must work together to contain and ultimately eradicate. This powerful idea of equality is a founding principle of the United States and forever venerated in the U.S. Declaration of Independence, which asserts as “self-evident, that all men are created equal.” Therefore, I commend your efforts to recognize and celebrate all people and groups which, creates the unique and special community you all enjoy in Constanza.

The United States is a grateful beneficiary of your community’s efforts to welcome peoples of all backgrounds. As you know, Constanta hosts a permanent U.S. presence at the Mikhail Kogalniceanu Air Base – Colonel Vaughn will offer some remarks regarding the U.S. military presence in Constanta a little later. Romania hosts this rotational presence of roughly 1,000 U.S. troops as well as an Aegis Ashore site at Deveselu that is a key component of Europe’s defense. We highly value the U.S.-Romania Strategic Partnership as well as the importance of NATO. We are proud to be here in the Black Sea region of Europe as part of our commitment to peace, security, and prosperity in the region and beyond.
As I am sure most of you have heard recently, that Romania will host a substantial number of additional American troops as a result of our new strategic defense policy. Romania is a key ally in this strategic policy. The southeastern flank of Europe will be fully protected against all malign influence. Romania is one of the principal pillars and lynchpins in the United States and NATO defense strategy. Romania should never have to worry about its border integrity and security.

But it is not just the military who is involved in this partnership. Romanians of all backgrounds have an important stake in the nation’s security and prosperity. We commend the Romanian people, as they cast off the remaining shackles of Communism and build a strong, free and economically thriving nation – a model for the region, and a worthy example to fellow NATO and EU member states. The United States fully supports Romania in all of its aspirations. The United States’ relationship with Romania is not based solely on defense; we are working diligently alongside our Romanian partners to boost energy security and diversification. Romania signed an agreement on civil nuclear cooperation with the United States that will deepen our partnership in a crucial sector. We are in lockstep in ensuring Transatlantic network security as 5G technologies develop. The free world needs safe 5G technology – not technology that is corrupted by crooked companies from communist china. Safe 5G technology from reputable companies other than Huawei is the only way forward. We are partners in thwarting bad actors in the cyber world and safeguarding critical infrastructure.

The United States Government and U.S. companies operating in Romania stepped up to support Romania’s relief efforts due to COVID-19. Through an $800,000 grant, we are working with the Romanian Red Cross to ensure rural and other vulnerable communities have the appropriate tools to combat this pandemic. The United States Government and American companies in Romania have contributed millions of dollars in cash and supplies to the Romanian people to fight Covid.

As we move forward the United States is committed to assist Romania reach its true potential and become a European economic leader. Prime Minister Orban has developed an ambitious economic program. The program calls for the immediate development of roads, highways, railroads and other infrastructure projects desperately needed in Romania. These programs also call for the development of irrigation canals, food processing factories and development of agrarian areas. Romania will again be known as the breadbasket of Europe. Additionally, renewed civil nuclear energy projects developed with western technology and new oil and gas extraction will make Romania a net energy exporter. The Romanian renaissance is well on its way.

Lastly, I am proud to have been able to join with Interior Minister Vela, Justice Minister Predoiu and General Prosecutor Scutea in the fight against human trafficking and organized crime. The United States has pledged to use all available resources to assist Romania in this fight. I say again to all of these criminals – you will be identified, arrested and prosecuted. Romania will be free of organized crime and human trafficking.

I want to also mention PSD president Marcel Ciolacu’s courage for recognizing that one of the PSD chapters was infiltrated by criminals and terminating that chapter. I encourage him to continue to root out corrupt individuals from the PSD. Romania can not return to the corruption of the last several years. It needs to move forward as the free and vibrant democracy that its people want and deserve.

I am proud to be a part of these efforts and thankful to Romania, and Constanta, for hosting the U.S. military and for being an invaluable U.S. and NATO Ally promoting domestic and international security.

President Trump and I thank you Romania for being a great ally and friend.
May God bless you, Romania and the United States.
Thank you and have a wonderful evening.