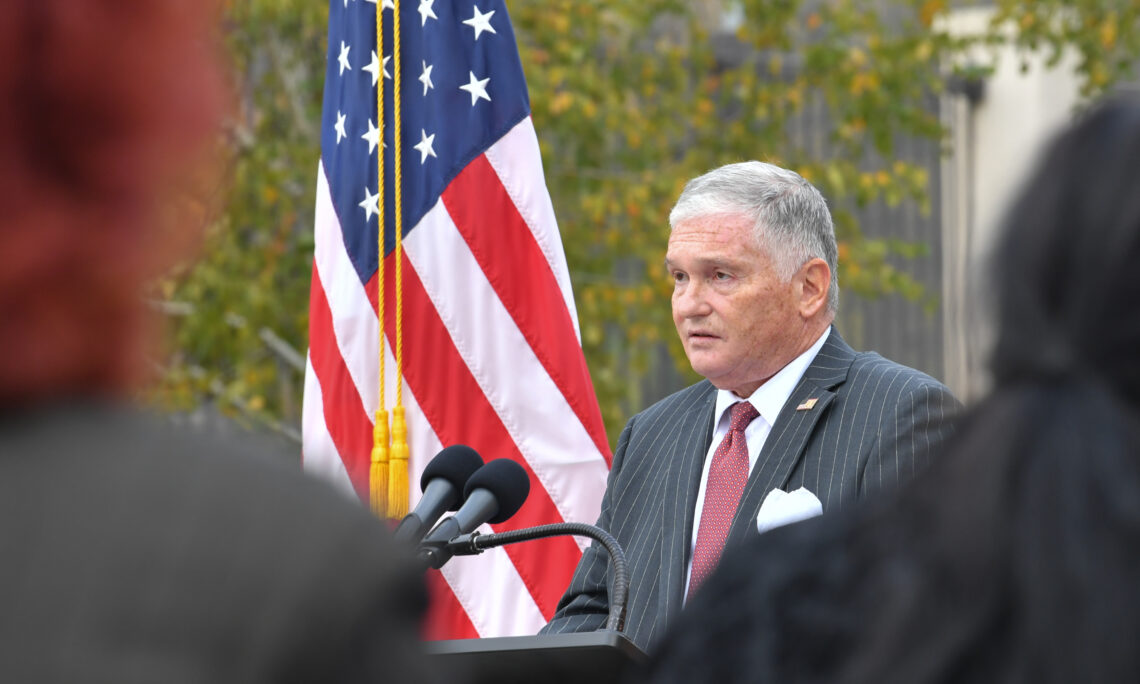 Welcome to the Embassy of the United States of America. It is my pleasure to welcome our guest of honor, Iancu Ţucărman, a kind, gentle man and a model for us all. I am also honored to welcome the Romanian Prime Minister Ludovic Orban, Israeli Ambassador David Saranga, German Ambassador Cord Meier-Klodt, President of the Bucharest Jewish Community Paul Schwartz, General Director of the Elie Wiesel Institute Alexandru Florian and all of the other distinguished guests here today too numerous to mention. Thank you all for joining me to honor a man that has seen more and suffered more than words can ever capture; and despite it all one who is the embodiment of dignity, decency and love for humanity, for his people and for his country.

I first met Iancu earlier this year at a reception at Ambassador Cord Meier-Klodt’s residence. We became fast friends. He is a wonderful human being. I told him of my vast Ambassadorial powers – one of which was to make him my honorary brother! However, I now realize he still insists on spelling his name with a Ţ not a Z, so I will have to review the situation – maybe I will change the spelling for him – just kidding! Maria, what do you think?

Iancu is a survivor of the Iasi death trains. He is a kind soul, was an agronomist, worked on farms and was also a violinist in the Ministry of Agriculture’s orchestra. Through it all, he never lost his passion for life or music. Now he is a talent scout seeking promising young musicians. Iancu also still hosts a weekly radio classical music program, sharing his love for music and his profound knowledge of it with his fellow citizens.

Blind and ugly hatred nearly deprived us of this man. Iancu grew up in Iasi and was the victim of antisemitism both under the Iron Guard and then under the communist regime. In that lovely city that is this nation’s cultural capital, he was marched to a death train for the crime of his faith and his culture. In 1941 he and 147 other innocents were herded onto a train car meant for 40 people. Iancu was one of only eight that survived. The rest joined thousands of other Jewish Romanians, murdered and laid in mass graves. I visited Iasi cemetery last year, and I saw it. And I said a prayer for those interred there, and indeed for us all.

Iancu was condemned to death, he survived beatings and saw murder all around him. He was deprived of his humanity and denied a proper and timely education – again, because he was Jewish.

Under the communist regime, antisemitism remained rampant. You were not allowed to talk about the Holocaust, as well as many other things, during this left wing tyranny. Life would have been far easier for Iancu had he joined the Communist party, but he refused. He refused in his own dignified and quiet way. He saw how morally corrupt and murderous the communist system was. This refusal will long stand in mute but powerful testimony to his character. This was a time when Jews were even pilloried for attempting to emigrate to Israel. They lost their jobs and endured terrible hardship for seeking to fulfill a tenet of their faith. My parents suffered the same fate. Alongside many of their Romanian countrymen, they were stripped of their livelihoods for seeking to emigrate. Iancu chose to speak about the Holocaust when it was forbidden, he chose the side of right and justice. In his own words, he was motivated by a fear that it can all happen again, if we do not talk about it and if we ever allow ourselves the privilege of forgetting.

Through it all Iancu has forsworn hatred and revenge. He has put his faith in education and a desire to better our human condition. He has been a strong advocate for the rule of law and its evenhanded application. He knows that without it, we have nothing. And I agree with him entirely, it is the rule of law that restrains the basest instincts among us.

We cannot and must not forget the holocaust – ever. We must always remember what evils we are capable of. But there are times when I wonder if just 75 years after the Second World War, we have already started to ignore the lessons of our collective history. We cannot turn a blind eye to the current-day horrors in other countries, including China. The Communist Chinese continue unabated with labor camps and re-education camps. I ask, where is the international outrage?

Where is the Romanian media? Are they not outraged? Where is the conscience of the Romanian political defenders of communist China? How many yuans does it take to forget human decency and morality? I hope you are as outraged with this conduct as I am. There is an easy way to deal with this: just say “no” to the communist Chinese.

I assure you President Trump meant it when he said “No!” No more turning a blind eye to China’s atrocious and murderous human rights abuses, no more ignoring its ceaseless land grabs, and no more pretending that its repeated intellectual theft and corporate espionage are not national policy. I commend President Trump for his leadership and for caring what happens to religious minorities around the world. Again, God help us all if we do not care and God help us all if we forget.

I also commend Prime Minister Orban and his government for remembering and for leading. He said that, with respect to 5G, “China cannot be our partner. We will choose a company that poses no threat to national security or other areas. China’s Huawei will not be part of building 5G networks in Romania. They do not meet the necessary national security conditions. Romania will have clean 5G networks.”

Thank you, Mr. Prime Minister, for being a European leader and for your courage in standing up to the most brazen and arrogant human rights abuser and criminal scofflaw in the world. I challenge the rest of Europe and the free world, who have not yet done so, to follow your lead! It has been 80 years since the Holocaust, not eons, and there is simply no excuse whatsoever to pretend that seeking power at all costs is not yet again leading a nation to practice unimaginable evil.

Lastly, I want to state it clearly again. Romania has no better friend than the United States. We are here and we are with you. We share the same moral values and compass. We will achieve and preserve our democratic values and enforce the rule of law together. We recognize that the United States also has no better friend than Romania. This year we have started the Romanian Renaissance and achieved many great things. We have also started many new projects which we will complete. We will also continue to undertake many more new projects together to achieve Romania’s great potential.

Iancu, I wish you the happiest of birthdays.

Thank you, and God bless you all.