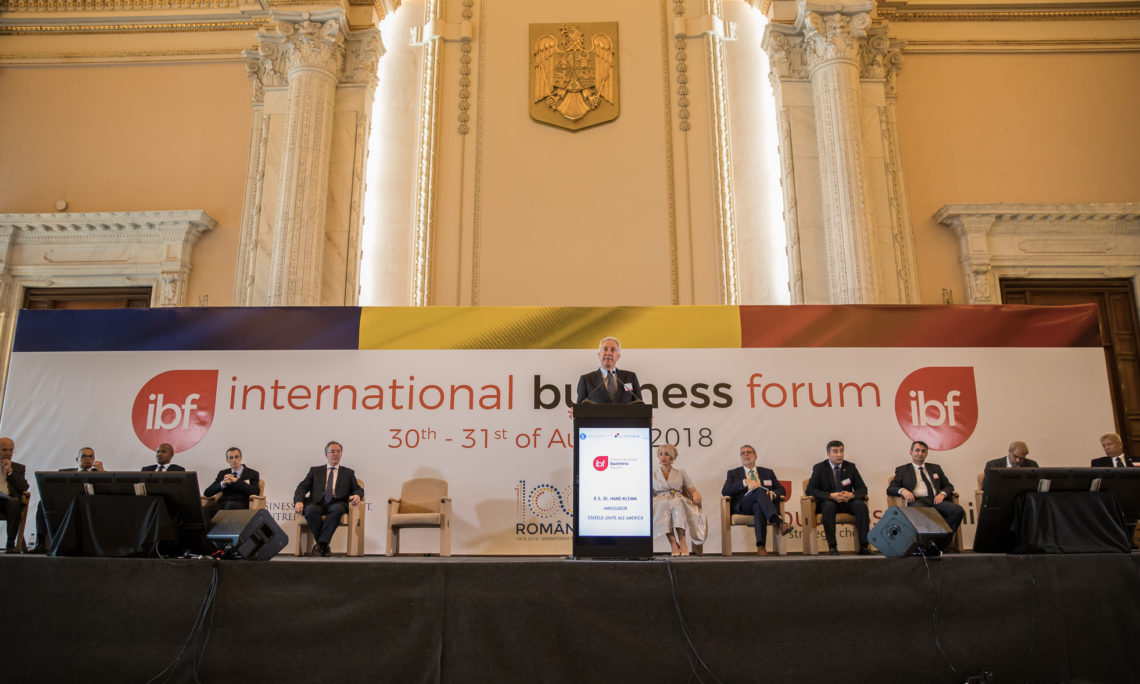 Thank you for the invitation to be present here this morning.

Let me begin by congratulating Minister Oprea, but also State Secretary Pirvanescu, for taking the initiative to hold a conference like this.

I have been, in my mandate here as the representative of the United States to Romania for almost three years, and this is the first time, the first government, who has sought to organize an event that would actually give encouragement, and incentive to Romanian business leaders, men and women, to think about investing abroad. This is a sign of, I think, both the great maturity that is being witnessed among Romanian companies evermore, and of course, it is also a signal of the strength of the Romanian economy that Romanian businesswomen and businessmen have been able to grow their operations here domestically and recognize that they have now an opportunity to expand their success to countries beyond Romania including — as we’ll see today — to Asia, to Africa and to North America.

If you look at the responsibilities that I have been given by my president in regard to the economic relations between Romania and the United States, my primary obligation is to increase the export of American goods and services to Romania. I am also told to support American investors as they consider investing here in Romania or they have operations and they should encounter obstacles to their operations, I am instructed to assist them.

The primary mechanism that the United States government, the federal government, offers is an annual event that usually takes place in the late spring in Washington DC called Select USA. And Select USA encourages investors from across the Globe to participate in the conference. It brings together not only all the federal agencies, the federal government agencies that are in place to support a good business climate, a positive investment climate, but also to encourage investment and the creation of jobs in the United States, but it brings together development agencies from across the American country, from state governments, from regional development organizations so it becomes a one-stop-shop for potential investors looking at the United States to discover what incentive programs, what type of training programs, what type of support programs exist at all levels of government, both federal, state, local and regional.

Select USA celebrated its 10th anniversary this year in June. I was very, very proud to accompany a delegation of Romanian investors to the conference in Washington. It is the second year that I have done so. In 2016, at the Select USA conference four Romanian individuals representing companies in a couple sectors participated. This year, more than 50 did. Indeed, out of some close to 3,000 participants in the conference, representing more than 60 countries, the Romanian delegation was the single largest from all of Europe and the fifth largest in the world. Again, that’s testimony to the success that Romanian companies are having in the local market given the very positive economic conditions that exist, but it’s also a very, very strong testament that that success is now translating into courage to consider investing overseas, building a business overseas, taking advantage of the full international market.

I want to thank the organizers of this conference for giving me the opportunity to promote Select USA. I encourage anyone in the audience who may wish to join a future Romanian delegation to the United States or simply it has curiosity about the American market, to look at the Select USA website; it is the most comprehensive clearing house for information on investment in the United States. I also want to encourage you — and I think your presence here today is a sign that you are ready for the encouragement – to consider investing and doing business in the United States. It is the most competitive market in the world and to paraphrase Frank Sinatra: if you can make it there, you can make it anywhere.