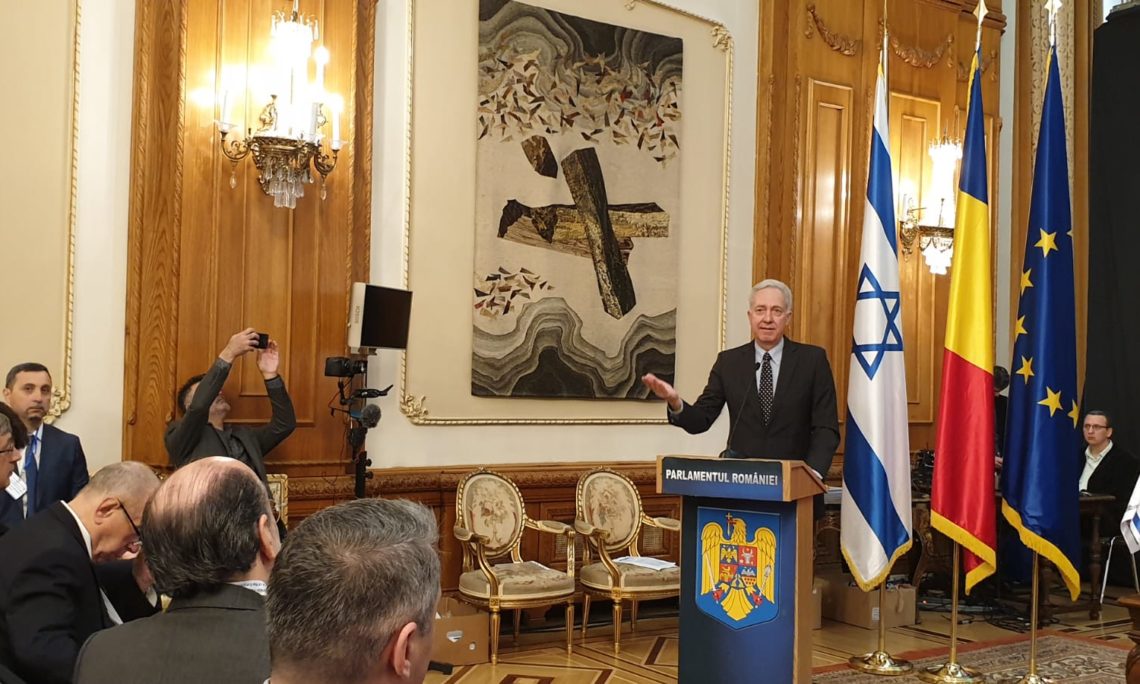 Madam President, Madam Minister, Your Excellencies, my colleagues, distinguished members of this panel, ladies and gentlemen, and most importantly Romania’s Ambassadors of the future,

I am going to direct my remarks to you, but first let me just say thank you to President Cherbis for including me in today’s discussion but also inviting the United States Embassy again this year to participate in this program. I had the chance with my colleague Melissa Wong and others to spend some time Tuesday morning with a group of students from the Laude-Reut School, as well as some instructors going over in detail about what our priorities at the United States Embassy are and how we try to accomplish those priorities.

Ambassador Saranga, I think all of my diplomatic colleagues here spoke very, very powerfully about some of the essential qualities of the work of a diplomat and Ambassador, and I would just like to share my perspective on some of the fundamental qualities that go into a successful diplomatic career. Before coming to Romania I was the head of the Human Resources Bureau at the Department of State, at headquarters, and responsible for recruiting future American diplomats, so we had to think through what skills we were looking for in the future generation of American Foreign Service officers.

Of course, as David mentioned, skills such as communication, substantive knowledge, analytical skills, all are very important not only to the diplomatic, but probably to most of any other, profession. There are a couple other factors that really are essential to your decision to pursue a diplomatic career. David asked how many of you are interested in becoming a diplomat, and the number of hands was relatively small. I think that’s not surprising, because the life of a diplomat can sometimes be very, very challenging.

Three things are essential: one is an eagerness – not only a willingness, but an eagerness, a drive to serve your country, not to enter a profession or not for monetary gain or otherwise, but actually to advance your country’s interests and values around the world, public service. A second factor is a willingness to live overseas, far from your country, as you do that public service and advance your country’s interests and values far away. This may sound a little obvious – if you’re going to be a diplomat, you’re going to be living internationally, far away from your home, but think about what that means to be far from your family. You could be serving in very difficult and troubled countries, as in the future you’re raising a family of your own, what impact will your diplomatic service have on your spouse and children? From personal experience, I can tell you that sometimes those decisions are indeed very challenging. I have served in Afghanistan. I have served in Timor-Leste, at that time a troubled and impoverished country in Southeast Asia. For much of my wife’s and my married life, we have lived separately professionally, as she was pursuing her career in international banking and I was pursuing my career as a diplomat. And, we don’t have children, but if you do have children, the challenge of moving every 2-3-4 years from one country to another and back to the Capital, can be very, very disruptive, but also it can be a profoundly interesting one.

And the third factor – and David mentioned this unsurprisingly, is both a proficiency for, but also an eagerness to study and learn foreign languages and then use that skill, that proficiency, as a diplomat when you are assigned overseas.

Some of the other factors that David mentioned – risk-taking, I agree, and a willingness to fail and learn from your failure, is not only a core element of a successful diplomatic life but probably of a successful life period. Creativity is also an important factor.

We ask you to think about the potential benefits of a diplomatic life, and this is not something that you have to decide tomorrow, by the way. You are all under 20. I am not sure what the average age is for the recruitment office at the Romanian Ministry of External Affairs, but my guess is that they recruit diplomats from a wide range of ages – I believe from 20s to middle 30s, so this is not something you have to do today. But, I would just encourage you to keep this career in your mind and perhaps 10 years from now, as you’re pursuing another career now, as David did in marketing, you will also make this decision to do something different, to do something for your country.

The benefits of a diplomatic life are twofold: one is the tremendous geographic diversity that opens up to you when you become a diplomat for your country. This is a challenge as I mentioned a moment ago, but it is also a great, great blessing. I have had the honor, privilege, of serving my country in Korea, in Japan, in the Caribbean, here in Romania of course, in Southeast Asia, but then working in Washington I have also represented my country in work with China and many other countries. So there is geographic diversity to this profession. And then there is also functional diversity. As Ambassador Saranga said, he was the President of the opening of the digital revolution in social media, I too had the opportunity to be – I wouldn’t call it as profound a revolution as that – but for some years at the turn of the century I worked for my government in trying to ensure that markets remain open to agricultural biotechnology. It sounds like a lot saying [this], but it was potentially an enormous advance for farmers too, to more efficiently grow crops, and we wanted to ensure that markets remain open for this sort of technology. So, I have served as an agricultural economist, as Ambassador to several locations, I have worked in economic development, human resources – as a human resource manager – and in many, many other functions. So, again, this is open to you as well, both geographic diversity, and functional diversity.

I want to congratulate the Laude-Reut School for having such a wonderful, generous program for students. It was in fact at your age that I first heard a little bit about diplomacy. As a high school student, I spent a year in Baden, Germany, at the school which also trained many of the children of American diplomats at the time, who were working at the American Embassy in Germany. It was my first exposure to a diplomatic career. You are also enjoying this exposure at exactly the same time. I hope that you keep this in mind, as you go to university and enter some future career, that this life of diplomacy is available to you as well.

Thank you for your patience.