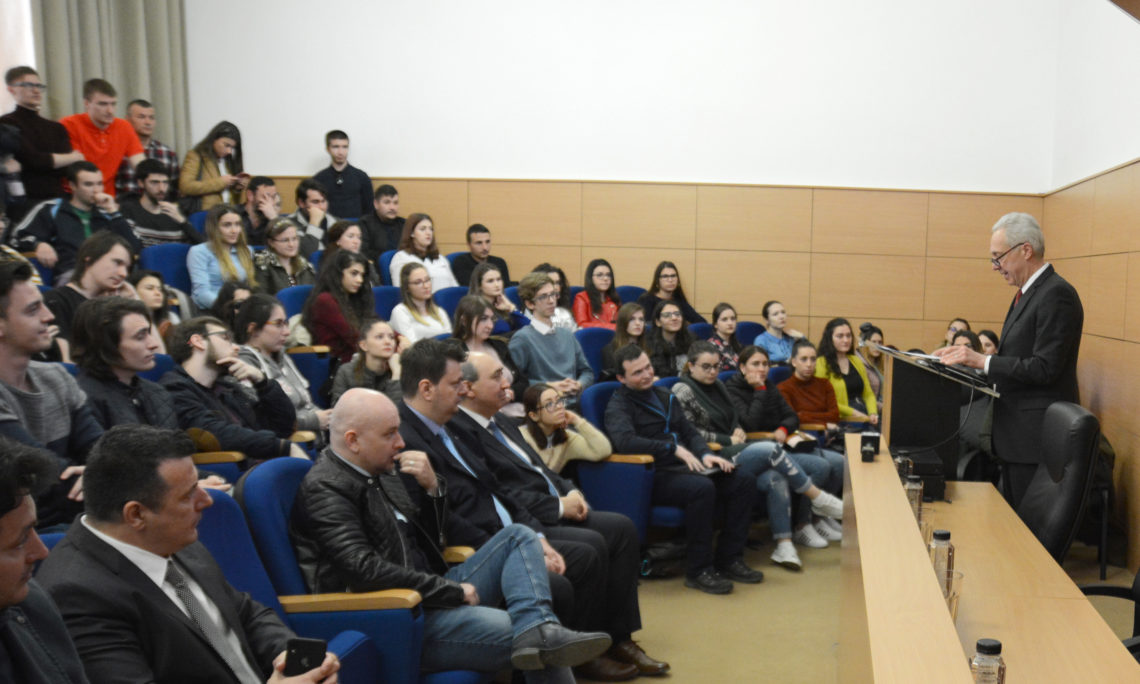 I am pleased to be here today in Galati. I have always been impressed with the beautiful Danube Delta region and the energy of its people. I also always enjoy speaking with Romanian students because you represent the future of the country – a source of hope and a wealth of ideas. You are the next generation of leaders, journalists, educators, and analysts, and we look forward to your ideas on how to address the challenges and questions we face today and the unknowns we will face tomorrow. And make no mistake: we face great challenges today. I want to talk to you about one ongoing and increasingly aggressive challenge to undermine Romania and the progress it has made over the past three decades.

I am referring to the hybrid warfare tactics used by Russia against Romania and its neighbors. Moscow’s military aggression is no secret: Russia has invaded Romania’s Black Sea neighbors – Georgia and Ukraine – and continues to illegally occupy parts of their territories. Sadly, we marked the 5-year anniversary of Russia’s widely condemned annexation of Crimea this month. In November of last year, Russia seized three Ukrainian vessels and sailors in the Kerch Strait. The sailors remain in Russia as hostages. Russia’s influence and intentions in the Republic of Moldova, with an estimated 1,200 Russian troops still deployed in Transnistria, are another point of concern.

Of course, the threat is not limited to traditional military aggression. Propaganda, although not a new tactic, uses modern tools like social media, to quickly disseminate disinformation, reaching a wider audience than ever before with the click of a button.

Information aggression throughout Europe is a growing concern and the targets are diverse: we see disinformation used to attack modern technology and medicine, like vaccines, and to hinder rule of law and anti-corruption efforts. In Romania, disinformation often seeks to undermine security and defense initiatives, portraying military defense as, alternatively, Russophobic paranoia, useless in the face of Russia’s military prowess, or an offensive threat that justifies any military attack by Russia – The narrative changes depending on what the Kremlin thinks will resonate most with the target populace. A good example of this kind of information aggression pertains to the Deveselu anti-ballistic missile base – a defensive establishment which is there to protect Romania and all of Europe from missiles originating in the Middle-east, but which Kremlin mouthpiece Sputnik has long claimed, falsely, is offensive and aimed at Russian cities and military targets.

There are other tactics used by Russia in its malign influence arsenal, but what they have in common is the goal: To weaken Romania and damage Romania’s faith in its partners and in each other. Russia wants to turn Romania against the West, challenge our shared values, and weaken western institutions. It seeks to drive a wedge not only between Romania and the West, but also amongst Romanians themselves, undermining confidence in their own institutions and inflaming the already existing tensions in society.

Why, you may ask, does Russia care so much? What is the end goal of these malign influence efforts? Why does Russia want to make you fearful of each other? Because if you are worried about your neighbors in your own country, if you doubt the reliability of your allies, you will be less able to generate the political will to defend your national interests; you will be more likely to capitulate to Russian efforts to reassert dominance in the region. Russian President Putin has made very clear he mourns the loss of the Soviet Union and seeks to reestablish the “sphere of influence” which Russia enjoyed during Communist times. Unfortunately for Romania, and all of Central and Eastern Europe, Russia sees you as an opportunity.

Russia seeks fertile ground to implement its hybrid warfare tactics and can be aided by domestic political forces who support weak democratic institutions, a lack of transparency in policymaking, and a toothless judiciary. Corruption, in particular, poses a national security threat for Romania in the context of Russia’s hybrid war. By exploiting these conflicts, Russia gains the ability to cripple the Romanian state, stall its democratic consolidation, and weaken its relationship with the EU, NATO Allies and the West. We don’t want that. The United States supports a strong Romania, which is resilient and can withstand Russia’s underhanded maneuvers.

I realize that, for many of you, your parents or grandparents lived through communism – a time of great social, economic, and political repression in Romania. We live in a very different world today, but the world of the Cold War and Soviet domination of Eastern Europe is not so distant. Do not take democracy in Romania for granted. I encourage you to stand watch. Romania has its strengths vis-à-vis malign influence. But even the strongest countries can come under attack. The meddling in my own country’s elections in 2016 is just one example. The invasion of Crimea by Russia and the resulting disenfranchisement of the voters living in that occupied area is another, more extreme, example of what is at stake. But malign influence is often more subtle. It is a slow, sometimes imperceptible, chipping away of democratic standards, the installation of speed bumps, rather than road blocks, to the functioning of free and open markets.

I encourage all of you to be vigilant against Russia’s hybrid aggression, to view information critically and question stories that do not reflect reality. Be wary of sensational, conspiratorial stories that aim to drive a wedge between members of your own communities. Disinformation is one of the greatest threats of this age and you are on the frontlines; you are the targets. Your pens and keyboards will be the weapons that beat back this seemingly invisible, omnipresent enemy. The battle will not be easy but I am sure that you will be victorious.

I also encourage you to remember what unites you. Throughout the country, throughout all walks of life and segments of society, Romanians must come together, reject corruption, and work towards a better future for Romania.

I wish you good fortune in your studies and in the battles to come. Thank you.