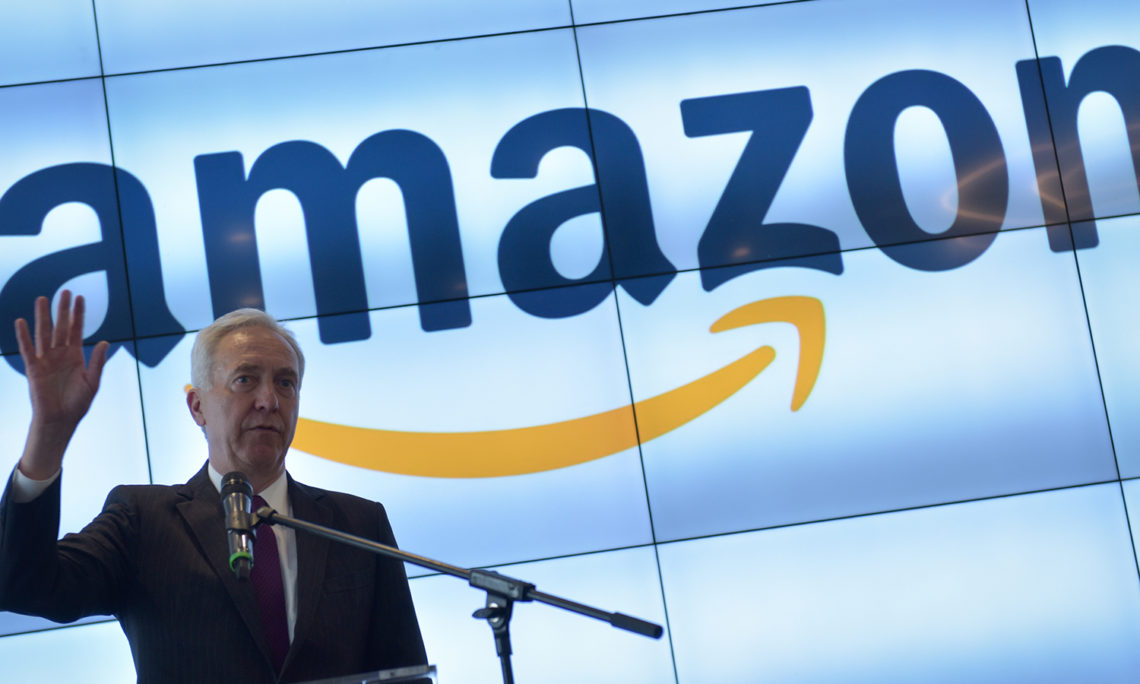 Lucian, I am very, very proud to be here this morning with you, your leadership team and anybody else who is here this morning from Amazon.  The reason for my pride is three-fold.  One is: this is my job.  I actually have written instructions from my President to support American companies in Romania as they try to sell goods and services or otherwise expand their presence and business in Romania. That’s number one.

Number two: it’s a major priority behind our Strategic Partnership. We have a number of dimensions and a very critical one is the economic dimension where we’re trying to – again, expand opportunities for American companies working in Romania, Romanian companies who wish to invest and trade with the United States and to reassure the Romanian people that our relationship is not just based on our security partnership but it is actually very much multi-dimensional and that very much includes American investment and American trade in goods and services with Romania.

The third reason I am especially proud to be here this morning has to do with my history with Amazon in Romania.  I’ve been here now for about two and a half years.  Shortly after I arrived, my first trip outside of Bucharest to a major city was to Iasi and I remember Anca Harasim from the American Chamber of Commerce and Greg O’Connor from my Commercial staff were with me and we had an opportunity to have a round table in Iasi with American companies but with Romanians in the local government, in the local university about opportunities that exist for businesses in Iasi and the Moldova region and then how we can take best advantage of the opportunities that exist. So, I also took that trip to Iasi to take the opportunity to meet and visit with Amazon and I remember meeting Lucian for the first time then and there are several things that surprised me about my visit to Amazon two and a half years ago.  One, was the fact that Amazon had already been in Romania for ten years. And two, that their operations in Romania were not – I am not sure what I was expecting when I first met Lucian – but I thought Amazon were maybe doing sales and marketing in Romania; on the contrary, they were doing engineering and technology development.  And third, I was very surprised about the size of Amazon’s staff in Iasi already then, but this was early 2016 – several hundred.  The following year or maybe eighteen months later I returned to Iasi and again called on Lucian just to get a status check on how Amazon was doing in Romania and I was astonished to learn that in the short time between my two visits the staff had grown like 300 persons, more than a third.  So, clearly Amazon in Romania have found a very, very good match in Iasi, but then also in Romania as a whole.

And another thing that I very much remember from my first conversation with Lucian and with his colleagues in Iasi was how much they appreciated the quality of life in Moldova and were able to recruit high quality staff not only from Moldova, Romania, but also from the Republic of Moldova, from Ukraine, very similarly they found work and life in Iasi to be a good fit.

But the company made a decision, and certainly the right way, to further expand in Romania and today we are here to celebrate the formal opening of their Bucharest operations.  I was just told that operations here in Bucharest will somewhat be additional to what Amazon is doing in Iasi, but more importantly, will add two separate lines of new business to their portfolio of operations here in Romania.

So, for all those reasons, Lucian, it has been a great pleasure to watch the development of Amazon Romania over the past three years, or I should say twelve years, is a symbolical hint of the opportunities that exist for American who wish to operate in this country and region in the world, and I wish you and your team both in Iasi and in Bucharest great, great success.