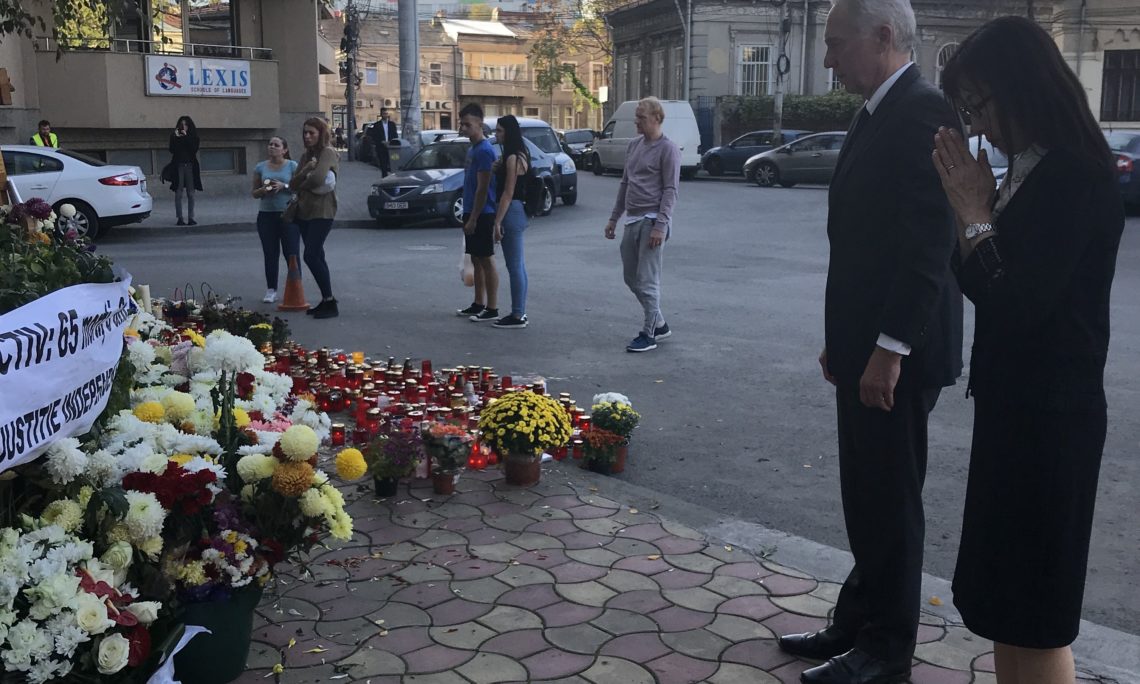 Ambassador Hans Klemm and his wife, Mari, pay their respect to the memory of the victims of the Colectiv nightclub fire. Bucharest, Romania, October 31, 2018 (Carmen Valica / Public Diplomacy Office)

“The fire occurred right after Mari and I arrived. The tragedy was so powerful for us because so many young talented Romanians lost their lives or were horribly injured.

It was very similar to another very tragic event that occurred in United States, when we were both there, about 10 years earlier so the memories were very bad.

What happened after the [Colectiv] tragedy was also very inspiring, people trying to help those that were still alive – individuals, companies. I spent an evening together with the chief-operating officer of Oracle Company, for example, and also the country head, Sorin Mindrutescu –a number of the Colectiv victims were employees of Oracle and I was just really inspired by the effort that company was making to try to take care of those who were still alive, their colleagues and families. Then of course, there were also countries that made an effort to help: Israel, the Netherlands, France, Austria, and Italy, among many others. The United States, unfortunately, was too far away to give immediate medical support to those who suffered so badly, but we tried to do what we could and, of course, our hearts are with the families and friends of those who suffer. It was also very inspiring the way the people of Bucharest and Romania reacted, that they saw these young Romanians as victims of corruption and said they were determined to fight corruption. This is always something that the United States has supported and when I think back over the past three years, when the anniversary comes, there are many stories in the press about the tragedy itself, those who died, but also those who survived and I recently read a short profile of one of the survivors in DOR (Decat o Revista) and a colleague of mine yesterday met with four of the survivors and their stories are very powerful, but the strength of their survival again is very powerful.

Looking back three years, what I would not have expected is that the fight against corruption would be weakened as it has recently; that independence of the judiciary would be under threat; that there is an ever-higher risk that selection of prosecutors would again be politicized. This is something I would not have predicted three years ago. Of course, as American ambassador this is something of great concern to me personally, my embassy, and also to the United States.”