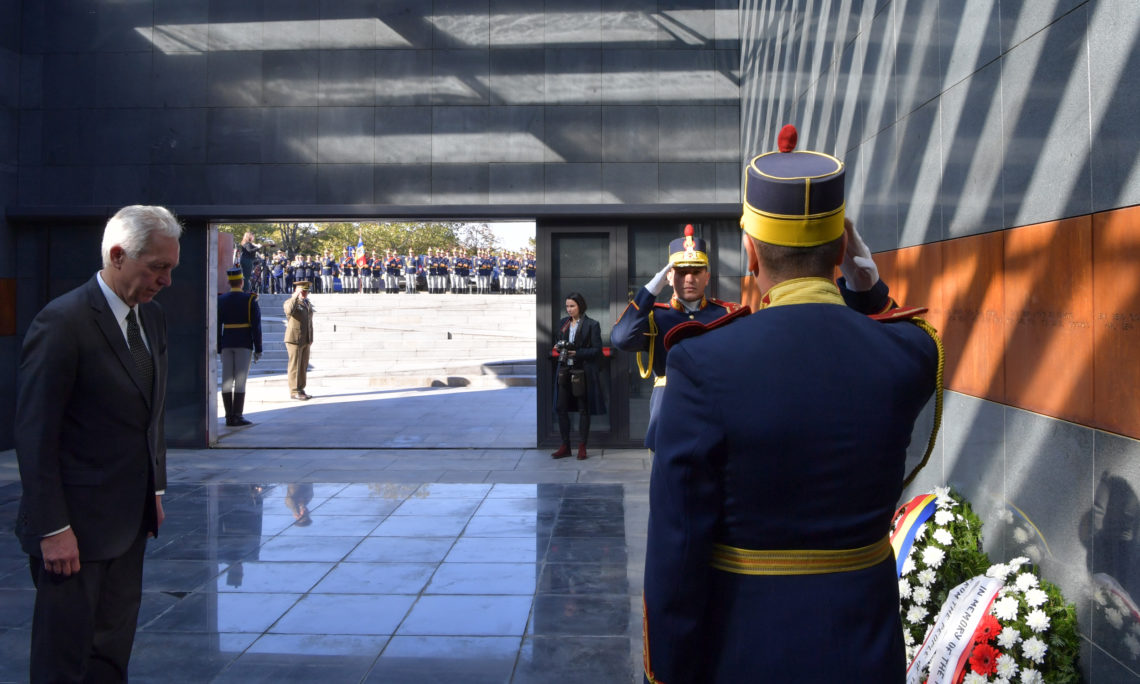 It is heartening to see the genuine progress made by the Romanian people and the Romanian government in addressing the tragic events of the Holocaust. Nevertheless, there still exists an urgent need for all of us to understand the past and to continue to fight against the forces of hate and anti-Semitism.

Romania took an important step this week when President Iohannis signed into law the establishment of the Museum of Jewish History and the Holocaust in Romania. This milestone is the result of years of tireless work by the staff of the Elie Wiesel National Institute, Deputy Vexler, the Romanian Jewish community, and all of their supporters. This museum will stand as a symbol of Romania’s growth as a democratic nation and society, one that all of its citizens can be proud of.

Sadly, despite this historic achievement, anti-Semitic and anti-Roma rhetoric continues to appear in the public discourse, and commemorations honoring historical anti-Semitic and fascist figures still appear in Romanian cities and villages. Multiple city streets bear the name of the dictator Ion Antonescu, and statues and images honor individuals who bear responsibility for crimes perpetrated during the Holocaust.

Politicians and public figures use inappropriate Holocaust references against their adversaries and minimize the gravity of the persecutions and killings of Jews and Roma. Provocateurs peddle anti-Semitic conspiracy theories, while sacred Jewish places are regularly vandalized with seeming impunity. All of this is appaling.

In April, I visited the city of Husi, where vandals had severely damaged several headstones in a Jewish cemetery. In August 2018, an individual desecrated the childhood home of Elie Wiesel in Sighetu Marmatiei with deeply offensive anti-Semitic graffiti. Besides these high-profile examples, we hear regular reports of vandalism and desecration to synagogues, cemeteries, and monuments in Romania.

Anti-Semitism is not unique to Romania – in fact, it is a far worse problem in many other countries around the world, and we in the United States are working to combat anti-Semitism in our own country.

The establishment of the Holocaust museum can serve as a turning point for Romania, a new foundation for national scholarship and public dialogue. The United States offers itself, through the Embassy, our partners at the U.S. Holocaust Memorial Museum, and our delegation to the International Holocaust Remembrance Alliance, to assist in this effort.

On this day of commemoration, we should see clearly why these efforts are necessary. As we honor the Jewish and Roma victims of the Holocaust, the survivors, and their families, we recognize the residual damage this atrocity has inflicted upon humankind. As a matter of morality, and even survival, we have no choice but to commit ourselves to ensuring this never happens again.

There are two sides to this effort, one looking back, and one looking forward. First, we must fully and accurately understand the circumstances and forces that led to the Holocaust. This is the role of scholarship, education, and public dialogue. Second, we must apply that knowledge to the present, to understand what is happening today, and to prevent history from repeating itself.

The fight against modern anti-Semitism requires more vigorous prosecution of hate crimes; better training for police, prosecutors, and judges; and public condemnation by officials of anti-Semitic and racist acts.

Thank you for your attention and patience.