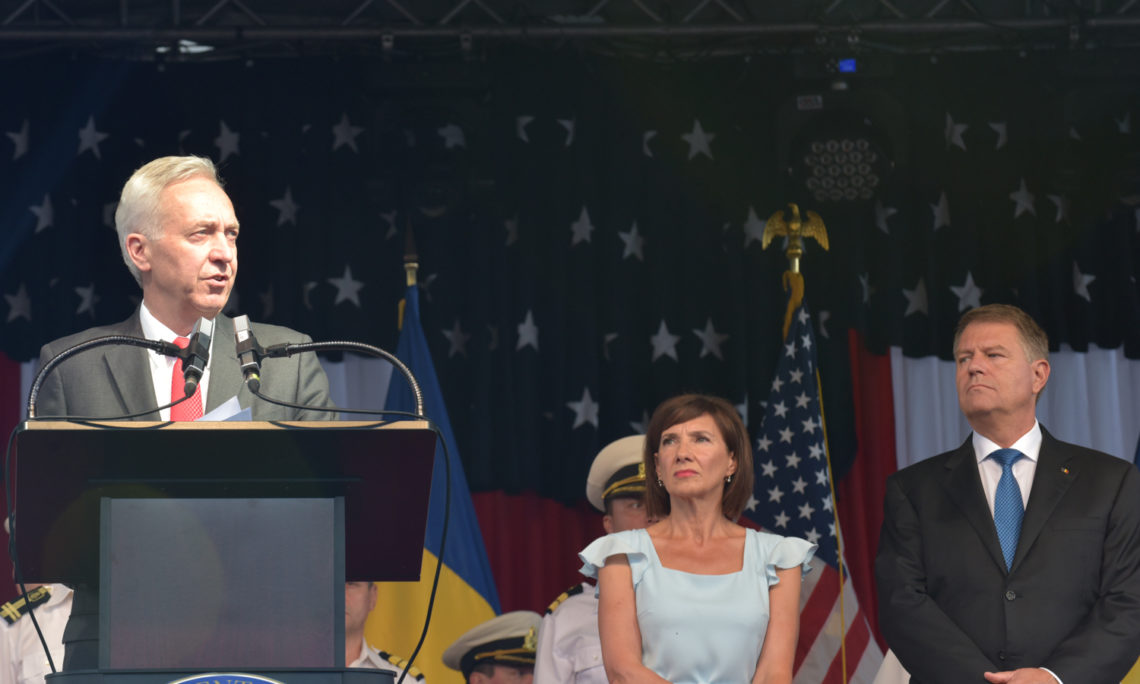 Many of you as you entered told me that it is a sign of both good fortune and good luck to have rain. Thank you for your patience. If that is true, we were certainly blessed tonight.

Thank you for joining us as we celebrate the 242nd Anniversary of the Independence of the United States of America. In 2018 we also celebrate Romania’s centennial, an event in which the United States is proud to have played a role, through President Woodrow Wilson’s reference to Romania in his famous Fourteen Points speech of January 1918, and his call for democracy and self determination. It is therefore fitting that this year we also celebrate 100 years of friendship between our two countries.

Around us you will notice faces of some of those who played important roles in the history of our relationship, people who brought us closer together. In addition to President Wilson, we have King Ferdinand, who led Romania through World War One, and Queen Maria, who represented Romania to the world very successfully in the aftermath of the war. At the Paris Peace Conference, in capitals throughout Europe, and later, visiting with President Coolidge and his wife in Washington, D.C., Queen Maria campaigned to ensure liberty and independence for her people.

There is George Enescu, a child prodigy and Romania’s most famous composer. Compared often to Mozart, he made his American debut in 1923, conducting at Carnegie Hall. He returned to the United States many times over the course of his career, bringing his music, his creativity, deeply influenced by Romanian folk traditions, to American audiences.

Dr. Liviu Librescu, born in Ploiesti, he survived the Focsani ghetto in World War Two. He later became a professor of Engineering Science and Mechanics at Virginia Tech University, where, in 2007, he gave his life, barricading his classroom door from a gunman while his students escaped through a window.

Professor Matei Calinescu, whose family hails from Turnu Severin, received a Fulbright scholarship and went to the U.S. in 1973. A novelist and literary critic, he became a professor of comparative literature at Indiana University, educating thousands of American students, not only about literature, but at least for me, about the wonders of the Romanian culture.

Elie Wiesel, son of Sighetu and a survivor of the Holocaust, became a noted writer, political activist, and professor and led efforts to ensure that the memory of the Holocaust remains throughout the world, but especially in the U.S. and Romania. In 1996 he received the Nobel Peace Prize as a “messenger to mankind,” who told us “of peace, atonement, and human dignity.”

Nadia Comaneci was the first gymnast ever, male or female, to score perfect 10’s at the Olympics. A multiple Olympic gold medalist, Nadia now train young athletes in the United States.

These are just a few of the people who left a lasting mark on the history of both of our countries, who built bridges between Romania and the United States, and who enriched the lives of both Romanians and Americans. There are many more, including all of you who have joined us this evening.

For our part, we will seek to further broaden, strengthen and deepen the U.S.-Romania Strategic Partnership.

We will continue to point to Romania as a model NATO Ally that is meeting, or exceeding, its commitments to the Alliance by investing in its defense, modernizing its capabilities, and contributing not only to regional security, but to transatlantic defense, and efforts to end conflicts in areas far, far away from Romania, such as Afghanistan. Together we will preserve and strengthen transatlantic links.

We will continue our excellent law enforcement cooperation that ensures the safety and security of our citizens by fighting terrorism, organized crime, the trafficking of weapons, drugs, and persons, and the malign influence of hostile states. We will collaborate to improve cyber security and defend against hybrid threats.

We will promote American values and applaud Romania’s embrace of a democratic future and its consolidation of its democratic institutions, including an independent Judiciary.

We will encourage Romania’s contributions to European energy security, including taking the necessary steps to enable strategic investments in Black Sea energy production, with the enormous potential here in Romania of becoming a regional hub of energy production and supply.

We will support a stable, predictable, and transparent business and investment environment to attract American investors to Romania, grow trade between our two countries, and advance our mutual economic prosperity.

We will explore ways to increase the exchange of artists, scholars, students, and scientists between Romania and the United States, building on the great work of the Fulbright Commission and the recent, very welcome decision by the Romanian Government to introduce a film production incentive program.

We will commemorate the victims of the Holocaust and educate our children on the evils of anti-Semitism and extremism. We are grateful for the generous contribution of the Romanian government to the building of a museum here in Bucharest to celebrate the history of the Jews in Romania

Romania has its own goals for our Strategic Partnership, and we will continue to endeavor together to realize those aspirations.

In conclusion, as we celebrate American independence, the centenary of Romanian unity, and the friendship that has existed between America and Romania over these past 100 years, I hope for an even stronger partnership as we together face the challenges, and the tremendous opportunities, that lie ahead.

Let me now thank the many and very generous sponsors that have supported tonight’s celebration. Without their assistance, none of this would have been possible.

And let me now introduce our guest of honor, the President of Romania, Klaus Werner Iohannis.