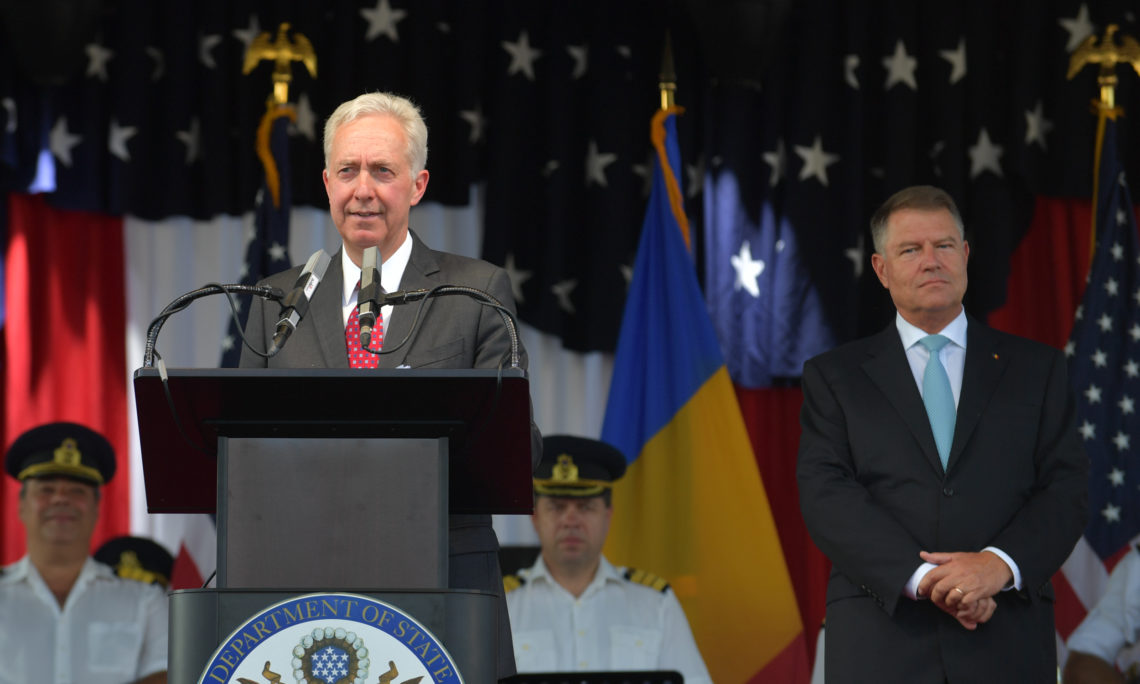 Mr. President, the U.S.-Romania Strategic Partnership is strong.  America recognizes Romania as a model NATO Ally that is meeting, or exceeding, its pledges to the Alliance by investing in its defense, modernizing its capabilities, and contributing to regional and global security.  The commitment of the Romanian people to democracy, the rule of law and the fight against corruption, demonstrated so clearly in the May elections, inspires us.  And Romania’s strong economic performance has made it a magnet for American investment.  Mr. President, as you discussed with President Trump in the White House two years ago, we now hope to expand our ties in strategic fields such as energy and defence.

America congratulates Romania on a successful Presidency of the Council of the European Union, completed just four days ago.  On behalf of my colleagues also in Washington and Brussels, we thank the Romanian Presidency under the leadership of President Iohannis and the Romanian Government, under the leadership of Prime Minister Dancila, for the close and effective cooperation we enjoyed on so many issues of mutual concern.

Second, thirty years ago we witnessed the collapse of communism and the fall of the Iron Curtain across much of Central and Eastern Europe.  In late June of 1989, Hungary and Austria cut the barbed wire fence that had separated their countries.  In November, jubilant Germans brought down the Berlin Wall.  Six weeks later, demonstrations quickly spread across Romania, culminating in the collapse of the Ceauşescu regime.  Soon after, we welcomed Romania into the family of democracies and in the transatlantic community.

Third, we celebrate the fiftieth anniversary of landing a man on the moon.  In a speech to the U.S. Congress in 1961, President John F. Kennedy called America to “move forward, with the full speed of freedom, in the exciting adventure of space.”  The race to the moon that followed, and Neil Armstrong’s first steps there, captured the world’s imagination and demonstrated the stunning possibilities of American technology.

Let me introduce two special guests – two space travelers – with us tonight.  In 1981, Romanian cosmonaut Dumitru-Dorin Prunariu became the 103rd human and the first Romanian to travel into space when he completed an eight-day mission aboard the Soyuz 40 spacecraft and the Salyut 6 space laboratory.

In 1978, Dr. Anna Fisher became one of NASA’s first female astronauts.  A chemist and doctor of emergency medicine, Dr. Fisher made many contributions to NASA’s space program, developing the “robotic arm” used on the space shuttle and designing spacesuits tailored for women.  In November 1984, she became the first mother in space, redefining what it means to be a working mom.  Dr. Fisher, Mr. Prunariu, welcome and thank you for joining us.

Ladies and Gentlemen: As you enjoy tonight’s celebration, please visit the many exhibits that highlight American and Romanian innovation in the spirit of the Apollo missions.  I call your attention to the displays by Bell and Motorola, two American companies that played a large role in NASA’s space program.  American innovators and technology leaders such as Ford, UiPath, First Bank, and others also have interactive exhibitions for you to enjoy.  And let me thank all of our generous sponsors who made this celebration possible.

We are proud also to highlight Romanian innovation, including a combined exhibit from the National History Museum and the Romanian Space Agency, and displays from the National Institute for Aerospace Research and the Extreme Light Infrastructure Nuclear Physics project in Magurele.  And we have here tonight four teams of Romanian high school students who competed in this year’s World Robotics Championship in my hometown of Detroit, Michigan.

In conclusion, let us commemorate the heroism of the Romanian patriots who died for liberty on the streets of Timişoara, Bucharest, and in cities across Romania, reminding us that the yearning for freedom beats strong in the hearts of all women and men.

Let us celebrate the audacity of the Apollo space program, and the walk of a man on the moon, reminding us that nothing is beyond the reach of our imagination when we direct our capacity for innovation to the benefit of humanity.

And let us honor the courage of the American Founding Fathers, who remind us that we are all created equal, and endowed with inalienable rights to life, liberty and the pursuit of happiness.

And now it is my great honor to introduce the President of Romania, President Klaus Werner Iohannis.