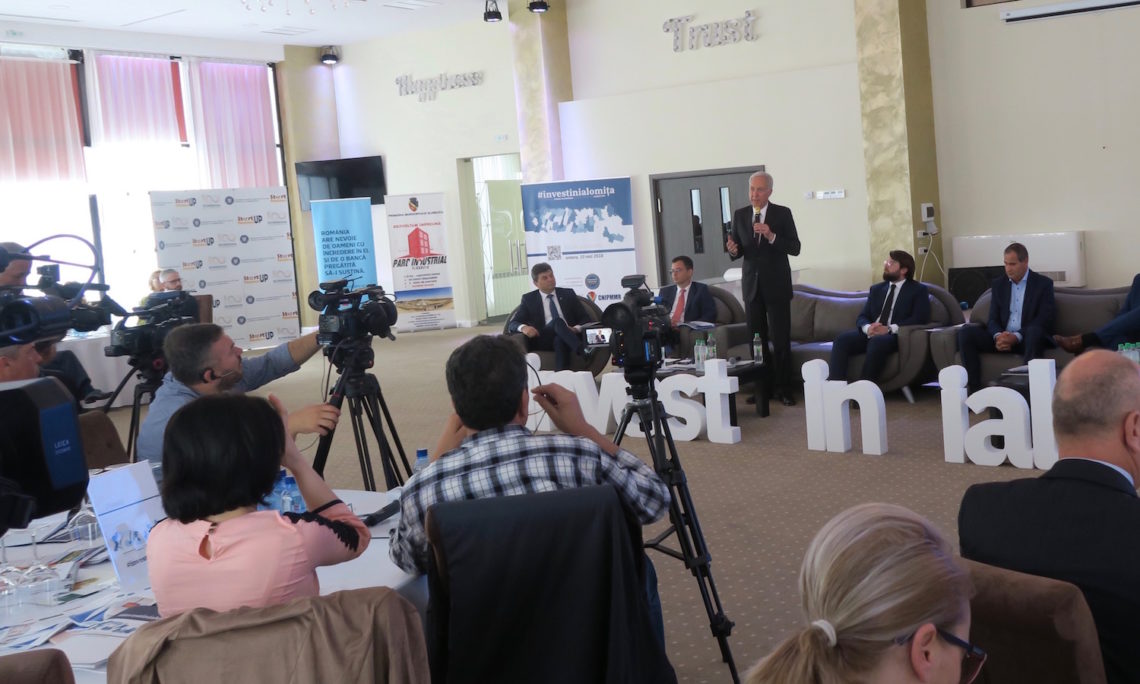 Thank you very much for inviting me here this morning and excuse me for using English rather than Romanian.  I very much want to encourage the objective of today’s conference; I think it is exactly the right thing to do – to bring leaders from the central government, bring leaders from the local government, but most importantly bring leaders from the business community to sit together and explore what has been working in Ialomita county, what are the challenges facing Ialomita county and what can be done together to overcome those challenges and bring investment to Ialomita county.  I am very convinced of the potential that exists here.  Just over a year ago, with the sponsorship of the Small and Medium Enterprise Council I visited Slobozia and several companies in the region – a dairy company, a furniture company – and it was clear that they were prospering and the conditions are here for other investors, other companies also to prosper.

Deputy Pop mentioned the Romanian-American Strategic Partnership.  One very important element to both countries under that partnership is our economic relationship. I have a letter of instruction from my President that tells me I must encourage American trade and investment in Romania and as a consequence, we have many programs at the Embassy to encourage the export of American goods, export of American services, also to promote and support American investors in Romania and also to encourage Romanian investors, Romanian companies to consider investing in the United States.  Just last week, Minister Oprea and I were together at an event where we were recruiting Romanian companies to do just that: consider investing in and setting up operations in the United States and being successful in the most competitive market in the world, in America, you can succeed anywhere in the world.  Next month, I will be leading a delegation of Romanian investors to Washington, to participate in a conference with those goals, to help them consider investing in the United States.

Last October, we had the largest trade mission ever in Romania – more than a hundred American companies participated, mostly just as you, small and medium enterprises.  We had ongoing efforts to support particularly entrepreneurship, a start-up culture, and these programs have success.  The American Chamber of Commerce in Romania has more than 400 members and some of the largest American companies operating in Romania are not a part of that organization.  For example Oracle Corporation, the largest single employer in Romania with more than 8,000 employees is not a member of the Chamber, but it gives you a sense of the size of American investment that’s already here. American companies are in agriculture, pharmaceuticals, financial services and manufacturing, both small and large companies and they are also very present in the IT sector because of the very skilled talent that is present in Romania and that are available to work in these very high-edge companies.  For example, just yesterday I was in Bucharest, at the new headquarters of Amazon.  They still are based in Iasi but they are now opening a branch in Bucharest with more than 700 employees planned to increase the engineering and product development, that is created here in Romania for this global company that is based in Seattle, Washington.

When I ask American investors what are the impediments to increasing their presence in Romania, I can quote exactly both Secretary Neacsu and also President Jianu.  They cite infrastructure; it depends, of course, what part of the country they’re in, but infrastructure, if created, will certainly create more opportunities as the Secretary General said.  They also refer to a shortage of manpower, so I congratulate the efforts to both encourage Romanians who have left Romania to return, but then also to encourage those who are here to stay.  I think one important element in that is to make sure that the Romanian education system, which does a tremendous job producing skilled engineers, that the education system is modernized and is available to all Romanians, regardless of which part of the country they are in.  And then the third area that is often cited by investors is exactly as President Jianu said, has to do with policy.  Companies, investors like stability, they like predictability, they like transparency, they like governments that are willing to consult genuinely with stakeholders like the business community before making policy changes.

Why is all of this important to the United States?  Why does the United States support the economic development of Romania? The major reason relates to another element of the U.S.-Romania Strategic Partnership and that is the tremendous positive work we do together to provide security for our people in a dangerous, unpredictable world, in a dangerous, unpredictable region of the world near the Black Sea.  The United States military, the Romanian military enjoy an incredibly productive collaboration and I want to thank the Secretary General, I want to thank him for this work within the Social Democratic Party, I want to thank him for his work within the Parliament of Romania to making the hard decisions to invest in Romania’s military so that it can make very, very powerful contributions to transatlantic security.  That’s why our Strategic Partnership is so strong; that is why in NATO, Romania is cited, is pointed to as being a model ally for its investment in national defense, for its contributions to Alliance security.

We do also tremendously positive work together in law enforcement, so together we are able to fight terrorism, fight organized crime, improve cyber security but also combat hostile intelligence services and ensure that we’re able to defend and deter hostile aggressors in this part of the world, but also across the transatlantic community and in places far, far from Romania like Iraq, like Afghanistan.