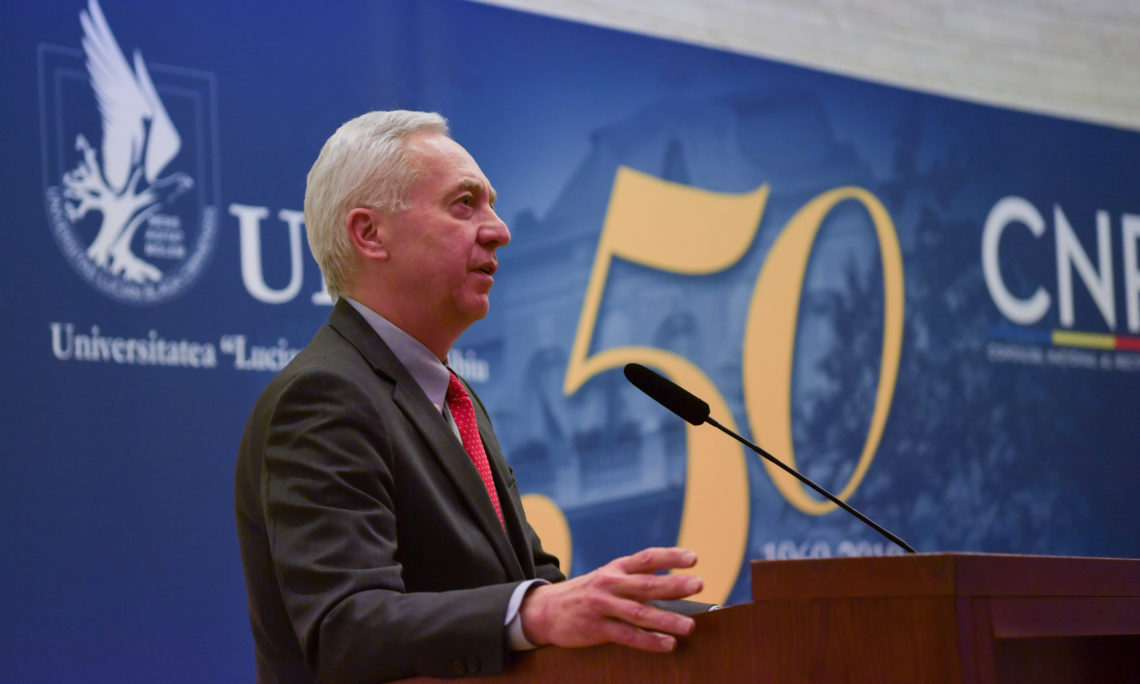 Mr. Rector, thank you for inviting me to participate in this wonderful celebration. Ladies and gentlemen, I will be brief.

Less than two months ago I had the extraordinary privilege of joining President Iohannis when he met with my President in the White House, on August 20th. That meeting provided a wonderful opportunity for the two Presidents to reaffirm the importance and strength of the Strategic Partnership between the United States and Romania.

Because the Strategic Partnership is so valuable to the United States, we seek, we desire – of course a democratic – but also a still more powerful and still more prosperous Romania so that we can do even more great work together.

Underlying these goals – security, democracy, and prosperity – is education. So the United States continues today to invest in education in Romania to improve education outcomes in Romania.

We do this through three channels. One – the Department of State together with My Embassy support a number of both short-term and long-term exchange programs focused on education. And this includes a year-long exchange program called the Future Leaders Exchange for Romanian high school students. Every year we send almost 40 Romanian high schoolers for a full academic year in the United States.

Another channel is supported by a very important partner of ours that is the Romanian-American Foundation. One of their priorities is to suppprt education in Romania. They do this through programs to support the STEM disciplines – science, technology, engineering, mathematics. They support agricultural high schools throughout Romania. Several years ago they launched Teach for Romania and they also provide support in many other ways.

And the third channel, perhaps this is the most distinguished of all, is the Fulbright Program. I am happy to see several fellow members of the Fulbright Commission Board here this morning. Begun in Romania in 1960 and reinvigorated after the Revolution, 30 years ago, in 1990, the Fulbright Program on an annual basis supports between 70 and 80 Romanian students and scholars who pursue their work in the United States and American students and scholars who come here to pursue their studies in Romania.

About four years ago, and the Rector referred to this, our these two partners, the Romanian American Foundation and Fulbright Commission, began jointly a new program to support the education of entrepreneurship in Romania. Participants from Lucian Blaga University have numbered now more than five, more than any other university in Romania.

Let me conclude by recommitting the effort of my Embassy and me to develop partnerships with educational institutions throughout Romania to support the development of partnerships, as the Rector mentioned, between American institutions of higher education and those here in Romania, including the University Lucian Blaga of Sibiu and let me express my sincere congratulations on this 50th anniversary of Lucian Blaga University of Sibiu.