Home Prima pagină | News & Events | Ambassador Hans Klemm at the NATO Exhibit “We Stand Together. Romania and the United States – 15 Years in NATO” 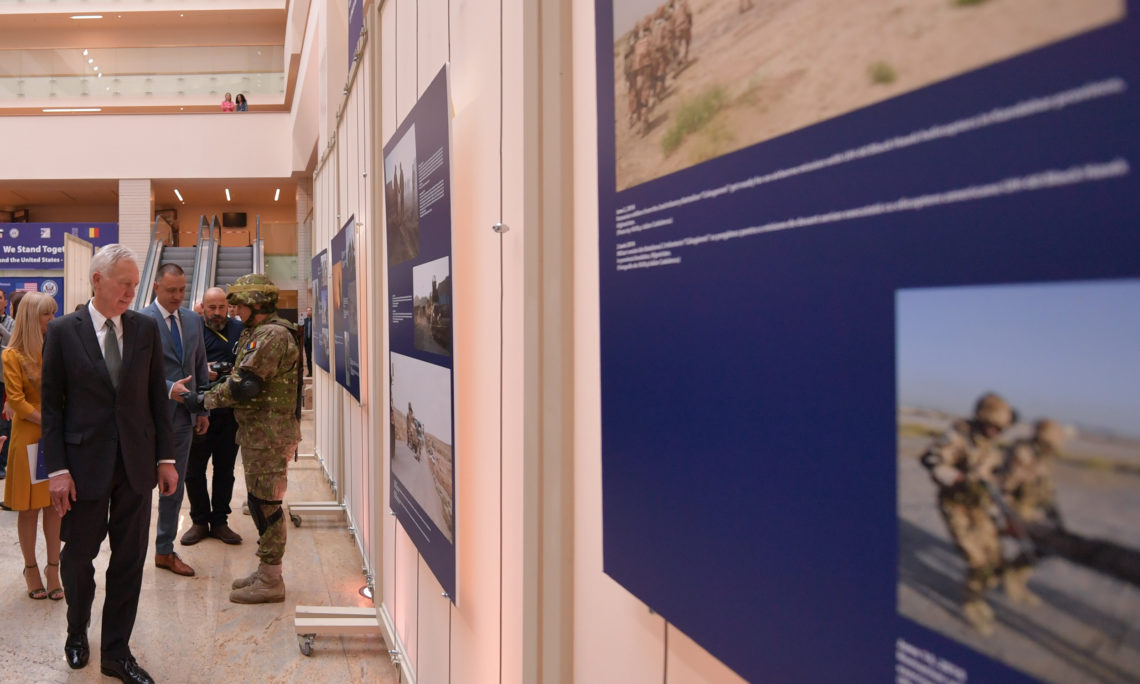 This year we are celebrating two important anniversaries in the North-Atlantic Treaty Organization.

One – the organization was founded 70 year ago and important celebrations of that event took place already in April and there will be another in London, in December. Just to recall, the organization was founded to defend and deter against common enemies, on the values of democracy, respect for individual liberties and the rule of law. Another anniversary that we’re celebrating this year is the membership, the entry into the organization by Romania, 15 years ago. Romania has become a very important member of the NATO Alliance in addition to becoming a very valuable Strategic Partner to the United States.

Allies’ commitments to NATO currently are measured against three factors. One is burden sharing and Romania is among one of the very few members of the organization that is meeting our common goal of spending two percent of national output on defense and the United States is very, very grateful for Romania’s willingness to take its fair burden.

Second, capabilities, that is the ability of Romania to bring to the battlefield in the end capabilities to defend and deter against our common enemies and Romania is investing that two percent in weapons systems and in other capabilities to ensure that it can contribute fully to our common goals of defending the transatlantic community.

The third factor is contributions to peace and security in areas both inside the organization but also outside and in this regard also Romania has done an exceptionally commendable job including in Afghanistan where it is the fourth largest participating member of the Resolute Support and has sacrificed greatly, not only in treasure, but also in blood on the battlefields of Afghanistan. Just four or three weeks ago, I had the unfortunate responsibility to contact leaders of the Romanian Government, including Prime Minister Dancila, to express the condolences of my Embassy and myself after the deaths of a Romanian diplomat and a Romanian soldier in Kabul.

Another important way to measure the commitment of an ally to the organization is by the people it sends to the organization and in this regard, let me congratulate Ambassador Mircea Geoana for his upcoming appointment next month as a Deputy Secretary of the North Atlantic Treaty Organization. He will be the first representative of a new ally to hold that position and the United States deeply and sincerely congratulates Ambassador Geoana on that appointment and wishes him the best of luck and success.

With that, again, ladies and gentlemen, thank you for joining us today. What we have here is a small exhibition of the past 15 years of Romania’s membership in NATO. Please, after the opening ceremony, take your time to look around. It captures some of the history of Romania’s participation in the Alliance and some of the joint activities that Romania has participated in both with other Allies, but also, most importantly, with the United States.

With that, let me introduce Prime Minister Viorica Dancila. It is, Madam Prime Minister, a great honor that you would join us this afternoon. Thank you.