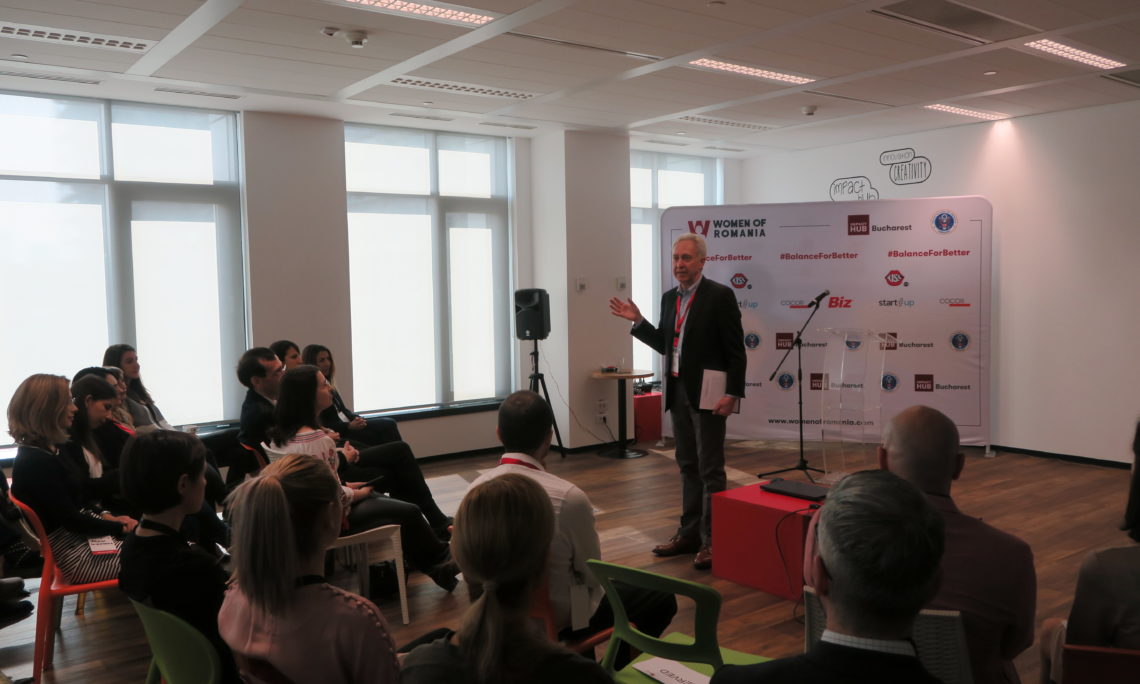 Does everybody know why International Women’s Day is commemorated on March 8?  Very briefly, 111 years ago in New York City, there was a protest by women who were working in the garment, textile industry in Manhattan.  It was a very, very large demonstration, the first of its kind – industrial action by women protesting about both the wages that they were receiving, but also the conditions of their work.  And following that protest, that day became enshrined as International Women’s Day. It is celebrated now in different manner in different countries.  Here in Romania I have noticed it has taken on a romantic aspect; yesterday walking around the city it was really remarkable how many women I saw, of all ages, carrying flowers.  But that tradition of protest continues in some countries.  I believe there were major demonstrations in Spain and Brazil and possibly elsewhere by women who justly still believe they are not given the access to economy, to just wages, to adequate comfortable working conditions, and they took to the streets.

What I would like to do is begin with a very important and prominent woman in contemporary America, that is Ruth Bader Ginsburg.  The Supreme Court in the United States, the highest court in our country has 9 justices, a Chief Justice and 8 Associate Justices.  Ruth Bader Ginsburg was only the second woman ever to be appointed to the United States Supreme Court.  If any of you have flown recently or are about to fly internationally, either between Europe and the United States or Europe and Asia, in the past couple of months there has been a movie available on some of the flights that I’ve taken, on [about] Ruth Bader Ginsburg.  It’s a documentary, about an hour long.  It is a fascinating study about an incredibly strong and courageous woman.

In 1956, when she enrolled in Harvard Law School, she was one of only nine women in a class of 500.  The Dean at the time asked her “Why are you at Harvard Law School, taking the place of a man?”  Despite graduating at the top of her class, Ginsburg was rejected for a Supreme Court clerkship.  It is very, very typical for top graduates of American Law Schools to become clerks to the nine Supreme Court justices, and it is highly competitive.  For someone who wants to get into law in the United States, it is a very, very important stepping stone in the advancement of one’s career.  So she graduated top of her class, applied to become a clerk for a Supreme Court Justice, and was turned down because she was a woman.  When she received her appointment as a professor finally at Rutgers University, she was one of fewer than 20 female law professors in the United States.  And incredibly, the university paid her less than it did her male colleagues.
Ruth Bader Ginsburg became a co-founder of the Women’s Rights Project at the American Civil Liberties Union, and fought with great success to help more and more women advance in their career choices, culminating in a famous case, Reed v. Reed, that extended the 14th Amendment’s Equal Protection Clause to women.  Justice Ginsburg served with the ACLU up until she helped break yet another barrier by becoming just the second [woman] Associate Justice on the U.S. Supreme Court.
It is important that we celebrate the progress we have achieved so far, but thanks to icons of gender equality such as Justice Ginsburg we can present a different vision this International Women’s Day. Today we work to “Balance for Better” to create a gender-balanced world that can benefit from the talents of all its citizens.

Romania has made great strides in recent years, and I think Mihai pointed to some of the consequences of those great strides, particularly in the worlds of technology and entrepreneurship.  Romanian women are making progress as business leaders and professionals.  According to the MasterCard Index of Women Entrepreneurs, women own nearly 29 percent of Romanian businesses, ranking ninth among the nations surveyed.  Among EU nations, Romania has the second-highest proportion of female students in information and communications technology.  Thanks to the programs like Garanti Bank Romania’s Women SME Banking, women are experiencing increased access to finance.
But much still needs to be done.  A report from the United States Senate isolated three unique obstacles women entrepreneurs face – and these won’t surprise you, they’re obstacles we’ve discussed in this room before.  First, women lack role models and mentorship.  Positive role models inspire and offer guidance to entrepreneurs and small business owners.  Those who have professional mentors are five times more likely to start a business.  Number two is the gender pay gap.  Globally, women are paid 23 percent less and receive fewer raises and promotions.  With less accumulated wealth and senior-level business experience, women encounter the third obstacle, unequal access to the funding and venture capital necessary to stabilize or expand their businesses.  Women-founded startups receive two percent of available venture capital funds.

Combating these issues requires a long-term, consistent commitment to gender equality throughout government, the private sector, and society as a whole.  However, change starts with us as leaders as and individuals.  In our businesses we can hire women, pay women fairly, mentor women colleagues, and promote women leaders.  We, individuals and leaders, can refuse to tolerate sexual harassment and any form of violence against women and girls.  We can work to reduce gender biases in the workplace and push back against gender stereotypes.

I know many of you in this room are entrepreneurs yourselves or interested in entrepreneurship and starting your own company.  Underscoring our commitment of the United States and the Embassy of the United States here in Romania, we are co-sponsoring the 2019 Global Entrepreneurship Summit (GES), the world’s premier gathering of entrepreneurs, investors, and innovative thinkers, this June at the World Forum in The Hague, Netherlands.  During two days of dynamic discussions, pitch competitions, and matchmaking sessions, GES 2019 will showcase aspiring entrepreneurs, forge new collaborations and opportunities for investments, develop concrete business ideas, and accelerate solutions to global challenges.  Interested entrepreneurs can still apply to join GES 2019 through March 22, so a couple more weeks.  My colleagues tell me that 28 Romanians have applied for participation in GES 2019, one of the highest number from any country in Europe.

Also in June, my Embassy, the U.S. Embassy in Bucharest, will host a stop on the “Women in Entrepreneurship: Access to Finance” roadshow.  It is going to be held in cooperation with the U.S. Mission to the European Union in Brussels and the European Young Innovators’ Forum.  The goal is to hold a day of workshops and expert forums, designed specifically to help women entrepreneurs in Romania learn how to work with venture capitalists and other investors to get their ideas off the ground.  We are going to be looking for partners and participants.  Stay tuned, but hopefully we will be able to see you at this forum in June as well.

In conclusion, I would like to encourage you to continue your efforts to empower women in the economy and in politics, empower yourselves.  Coming back to Ruth Bader Ginsburg; once when asked how many women on the Supreme Court would be enough, she answered.  “When there are nine,” she said. “There [have] been nine men, and nobody’s ever raised a question about that,” she said.  So as we strive for gender equality, let us seek to create a world in which it is so common for women to be at the top of all professions in great numbers, and that nobody raises any questions about that.  Thank you for your patience.