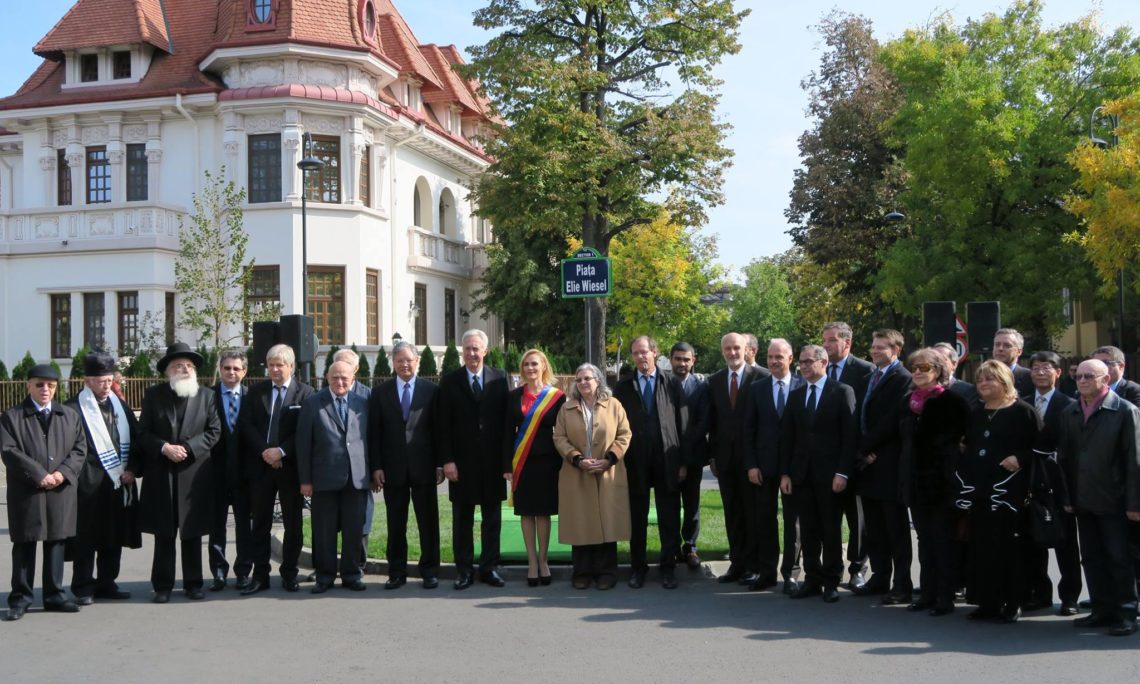 We stand here today to honor the late Elie Wiesel.  A native son of Romania, he made sure the world never forgot the horrors of the Holocaust.  And, after a lifetime of commitment, he truly had become a “messenger to mankind.”

When Wiesel was growing up in the northern village of Sighetu Marmatiei, in Maramures, his world revolved around family, religious study, and the Jewish community.  His WWII deportation changed this forever.  In 1944, he and his elder sisters survived Auschwitz, where his mother and younger sister died.  He then survived Buchenwald, where his father died before the camp was liberated by the Allies in 1945.

The now-orphaned Wiesel, still a teenager, ended up in France and eventually made a home in the United States, where he taught and wrote, sharing his insight and wisdom.  All the while, his unshakeable mission was to make sure the world remembered the Holocaust.  He did this simply and directly:  by telling his and other victims’ stories.

It started with his memoir, Night, which has been translated into more than 30 languages.  It continued through his appointment, by President Carter, as the Chairman of the President’s Commission on the Holocaust and, two years later, as the founding chairman of the United States Holocaust Memorial Council.  In 1986, he was awarded the Nobel Peace Prize.  He and his wife, Marion, went on to found the Elie Wiesel Foundation for Humanity to fight indifference, intolerance, and injustice, and to champion the causes of other oppressed minorities in the USSR, Nicaragua, Argentina, Cambodia, Yugoslavia, and across Africa.

But, behind the councils and commissions and awards stood the author, the teacher, the storyteller, the man.  Teaching and writing were always central to his work.  Each was a way to get his message out and to keep the focus on memory.

For, as he so famously reminded us, “The opposite of love is not hate, it’s indifference.”

Many did not survive the Holocaust.  Many who did struggled to overcome what it did to them, physically and mentally.  But Wiesel survived and, through his actions, taught others to survive as well.  This was because his work, and his life, were grounded in compassion toward human suffering, and an allegiance to the belief that fundamental humanity would never perish at the hands of barbarism.

Though Wiesel died this past July, his legacy will live on.  In this square and in our hearts.  And we will cherish this legacy because we find strength and inspiration in it.  He dedicated his life to make sure that not only did we not forget the horrors of the holocaust, but in that remembering, we regularly recommitment ourselves to preventing from them ever happening again!  Let this place bear witness to how we remember Elie Wiesel, a name that has become synonymous with belief, and hope, and trust.