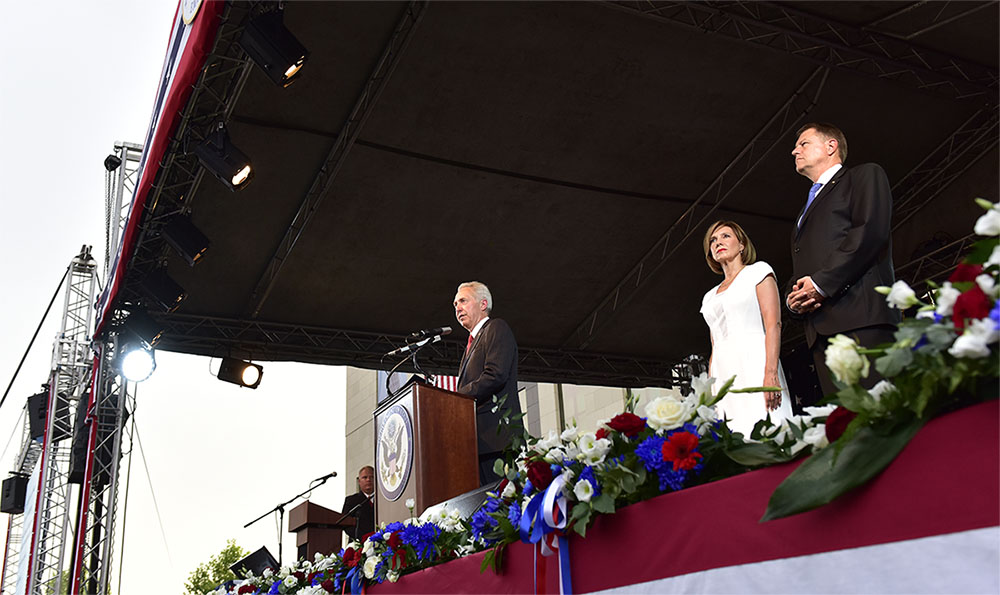 – As prepared for delivery –

Mr. President, we have three celebrations tonight. The first is to commemorate the signing by American patriots on July 4, 1776, of the Declaration of Independence. In that document, our Founders asserted not only that all are created equal with the rights of life, liberty and the pursuit of happiness, but that the British king was destructive of these rights. In response, our leaders declared two additional rights; the right to abolish the then existing form of colonial administration, and the right to organize a new government, one instituted among the people, deriving their just powers from the consent of the governed. As such, not only did those American patriots declare independence 240 years ago, but they also declared that American governance would be democratic and based on the rule of law.

This year America also celebrates the 100th anniversary of the establishment of the National Park Service. Like many great ideas, the National Park System in the United States developed over time, with many contributions, and continues to evolve. Its roots began more than 150 years ago, in the midst of the American Civil War, when President Lincoln signed into law the protection of the land now known as Yosemite National Park, in order for it to “be used and preserved for the benefit of mankind, to be held for public use, resort, and recreation…inalienable for all time.” During his presidency, Theodore Roosevelt aggressively set aside land throughout the nation, land that eventually became national parks, national forests, national monuments, and preserves. As a result of this expansion, America needed an organization to administer these federally-protected areas. For that purpose, in 1916, President Woodrow Wilson created the National Park Service. Presidents ever since have established new protected areas, including President Obama, who oversaw the opening of seven new national parks in 2015, and inaugurated the newest park just last month. President Obama’s objective in creating these new parks was the same as President Wilson’s, “to conserve the scenery and the natural and historic objects and the wildlife therein, and to leave them unimpaired for the enjoyment of future generations.”

Mr. President, we are also celebrating tonight the strength of the U.S.-Romania Strategic Partnership, and our bonds as allies, and as friends. In the past year, under our partnership, we have jointly invested in the security of the Trans-Atlantic area through the completion of the Ballistic Missile Defense site in Deveselu. Our militaries exercised together frequently to deter threats to Romania and the Black Sea region. Our soldiers, sailors, airmen, and marines fought together on battlefields far from Romania. And our law enforcement personnel collaborated deeply to counter terrorism, to counter proliferation of weapons of mass destruction, to stop organized crime, to stop the trafficking of persons and drugs, and to support Romania’s fight against corruption.

Under our strategic partnership, we also advanced cooperation in energy security, political coordination, and consular matters. You asked me to focus additional energy on the economic dimension of our partnership, to increase trade and investment flows between our two countries. In response, we brought trade missions to Romania, are supporting Romanian entrepreneurs in IT, education and ecotourism, and have encouraged American investors to consider the economic potential that Romania offers, just as we have encouraged Romanian investors to consider America. And to yet further broaden the scope of our partnership, we jointly launched new work this year in cyber security and, most promisingly, to redouble our promotion of joint collaboration, and exchanges of students and scholars, in science, technology, education and culture – and possibly energy, medical and agricultural research as well.

Mr. President, I am convinced that if we work earnestly together, the potential of our partnership is boundless. With your leadership, we can together promote security, promote democracy, and promote prosperity, not only for Romania and America, but for the entire Trans-Atlantic region and beyond. Together, as allies, as partners and as friends, we can powerfully contribute to a Europe that is whole, free and at peace. And, in accordance with the theme of our celebration tonight, our national parks, we can seek ways to work together to protect our forests, our plateaus, our grasslands, our mountains, our rivers and streams, and the flora and wildlife that depend on the health of the environment, for generations to come.

In a final note, I give thanks to our many generous sponsors.

Now I wish to introduce the honorable Klaus Werner Iohannis, President of Romania. Thank you for joining us tonight, Mr. President. 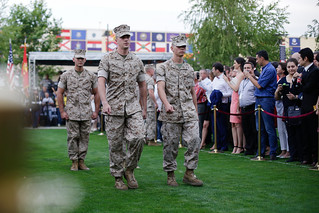