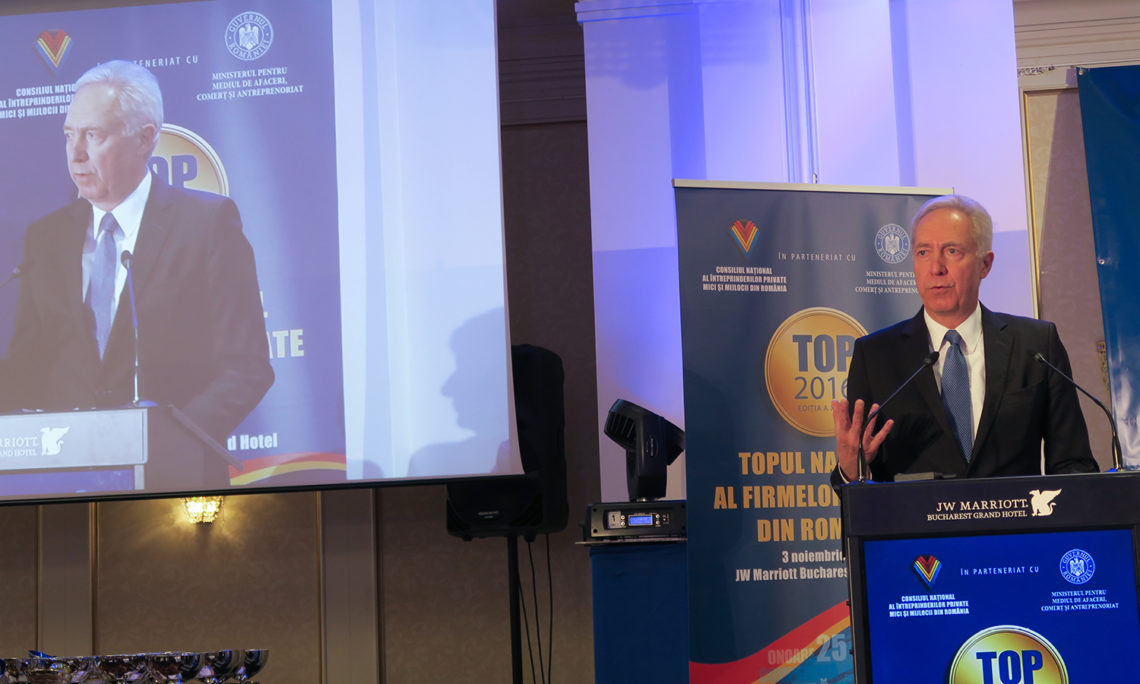 Thank you sincerely for inviting me to participate at this morning’s event. Seeing who I’m sitting next to, it a great, great honor to be a participant at this morning’s session. So, thank you to the National Council for the invitation and let me also begin by thanking the National Council for arranging and then participating in a visit that I was able to join in earlier this year, last winter, to Ialomita, Braila and Galati County. The purpose of the visit was to meet colleagues of yours, the owners, men and women, of small and medium-size companies in those regions of Romania. I met a broad representation of many sectors – agriculture, textiles, ship building, plastics, heavy machinery and I have been learning first hand from these successful business leaders. It also started from scratch essentially. It was very, very instructive to me. When I asked them what obstacles they faced in terms of expanding their businesses, the common factors — and these have already been discussed this morning – were: one, infrastructure, access to markets in other words, but then also concerns about the labor force.

The small and medium sector, entrepreneurs of course are vital for the success and strength of any economy, whether it be in Romania, Japan, Germany and it is certainly true in the United States. Small and medium-size enterprises are the source of innovation; they represent the entrepreneurial spirit, that’s where risk-taking occurs, and willingness to fail occurs, a willingness then to learn from failure and to try again and eventually to succeed.

Mr. President, you mentioned two anniversaries, let me raise a third one and that is: this is the 20th anniversary of the Romanian-American Strategic Partnership. One of my priorities within the Strategic Partnership is to promote prosperity, both the prosperity of the United States in partnership with Romania. We do that through trying to increase trade in goods and services between our two countries, to increase investment flow between Romania and the United States. One initiative that we recently hosted here in Bucharest was a trade mission, called Trade Winds, the largest ever mission from the United States to be hosted in Romania. And it’s on the U.S. side, on the American side, we really focused on companies like yours, representatives from the small and medium-size enterprise sector in the United States.

We have also – in order to promote innovation, entrepreneurship, startup culture and dynamism in the Romanian economy – we, under the Strategic Partnership have brought representatives for example from our S mall and medium Business Administration. About a year ago, my embassy together with the Embassy of Israel and the Netherlands hosted a conference to take a look at what obstacles exist that prevent the transfer of technology from research institutes, from universities, from public sector laboratories in Romania, from what obstacles prevent that technology from getting into your hands so that you could use it to innovate and commercialize products.

I have also often spoken about the policy environment here to encourage stability, predictability, transparency, genuine commitment to consult with all stakeholders, including the business community before undertaking policy changes to supply a simple cost-benefit analysis to those considerations, to do regulatory impact assessment and to strictly adhere to the rule of law.

The President mentioned a report issued just two days ago by the World Bank regarding the business climate or the doing business climate not only in Romania, but in countries around the world. As you mentioned, Mr. President, there was a particular change in Romania’s score on that survey, but a number of other countries did improve and actually increased their rank to a level above Romania, including to my surprise the Republic of Moldova, which is now slightly above Romania’s rank in terms of the ability for companies to begin operations and to enjoy a stable policy environment. I don’t know if you’re concerned about Moldova actually having a higher rank than Romania, but I think that would be something that I would be concerned about.

And then finally, let me just congratulate you for your individual success as leaders of Romanian companies. When I think about entrepreneurship in the United States, I think of course of people like Thomas Edison, Henry Ford, but then also more recently David Packard or Steve Jobs. Each of these individuals who eventually became major leaders of business started very, very small, on their own, typically in a garage, but trough their own initiative, through an application of their entrepreneurial spirit, they became the managers and owners of great, great American companies. I have no doubt that that potential exists in this room. Among us is perhaps the next Steve Jobs. With that, thank you for your attention and again for welcoming me to join you this morning. Congratulations.