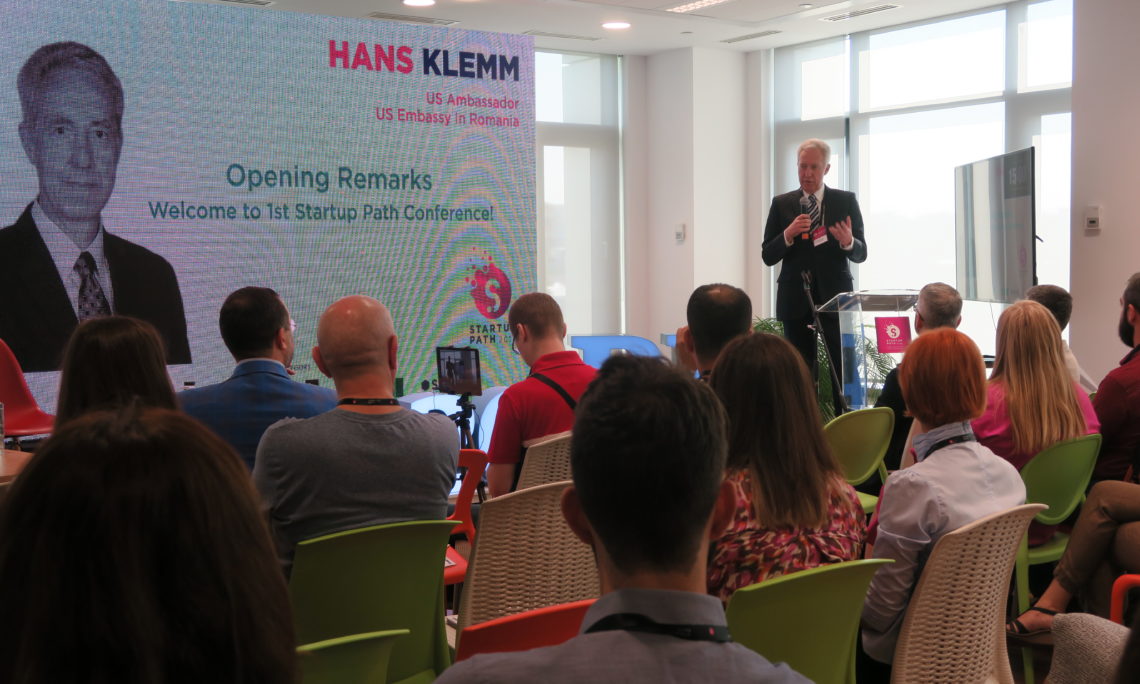 Thank you Business Review.  I am very proud to be here.  I was asking myself why is the American Ambassador here this morning, and I think what you are doing is recognizing not so much me, but the work that the American Embassy has been trying to support – to support entrepreneurship and to develop an ecosystem here that supports startups and the IT sector more generally.  But it is also a recognition of I think the value that America sees in entrepreneurship, in the role that entrepreneurship has played in the success of the United States and particularly of our economy.  I also want to thank all of you who are here this morning. I’ll try to keep my remarks short and then answer the question that Paula posed for me before I finish.

Your efforts today –Business Review’s — to bolster the local startup ecosystem are critical to supporting entrepreneurship in Romania.  Healthy ecosystems include a vibrant mix of universities developing the latest technology; incubators and accelerators to nurture ideas and impart concrete business skills; advisors, mentors, and networks of past, present, and future business leaders; and of course funding organizations, including business angels, crowdfunding platforms, investment, and venture capital.  Great startups accumulate and thrive where these elements are present.  Just as examples, in the United States, places such as Silicon Valley, Boston, New York, and many other islands that now became very successful because of their association and their ability to create an environment in the United States for entrepreneurs – think about North Carolina, Chicago, and many others, Boston, Texas.

Today, I encourage you to focus your discussions on three areas of critical importance we believe in improving Romania’s startup scene:  technology transfer; education and mentorship; and, risk aversion.  Romania’s universities should benefit from the role they play in turning new technology into commercially viable products and services.  The education system must help young Romanians develop the diverse array of hard and soft skills necessary to take a great idea and turn it into a scalable business.  Finally, we must work to develop Romania’s entrepreneurial culture, to create one that encourages serial entrepreneurship, one that accepts failure, learns from failure, and can use failure as a step on the eventual path to success.

We are capitalizing on American entrepreneurial success to support promising young entrepreneurs in Romania.  The U.S. Embassy has brought American entrepreneurs to Romania to contribute their expertise on the legal framework that facilitates entrepreneurship, the environment that promotes small businesses, the transparency measures that support the business climate, and the process of taking an idea, accessing capital, and commercializing a product.

Our entrepreneurship outreach events have engaged start-ups, business incubators, students and academics, including Impact Hub, which have become a very important partner for us.  We have have also touched on the importance of social inclusion and discussed challenges women entrepreneurs in particular sometimes face.  Most importantly, these U.S. experts who have come to Romania have provided practical knowledge for use by national entrepreneurs.  Many Romanian young entrepreneurs have also visited the U.S. on U.S. government funding provided by the United States government and had the opportunity to learn firsthand from the American entrepreneurship eco-system.

Romania’s startup ecosystem is becoming more and more dynamic, but scaling up remains difficult.  If a country is to fully capitalize on the economic potential of small- and medium-sized enterprises, it needs an attractive business environment.

Often, certain features of the institutional and regulatory framework here can generate unintended, but disproportionate, burdens on entrepreneurs and small businesses.  It is important that economic policy makers understand the compliance cost of regulations and work to ease regulatory burdens to foster a pro-business environment.  Public sector integrity and transparency, public administration efficiency, quality in public services, and infrastructure are essential for creating a level playing field for private sector actors, and even more importantly for small businesses.

At the American Embassy one of our priorities is to promote mutual economic prosperity.  In addition to promoting trade and investment, the United States strongly supports entrepreneurship and innovation as a component of our economic partnership with Romania.  We try to encourage the government to advance reforms and efforts designed to support small businesses, young entrepreneurs, start-ups, and trade, sometimes with success – often, but not always.  Our partnership is made stronger by the free and open exchange of ideas and a commitment to enhancing economic opportunities for all of our citizens, Americans and Romanians alike.

The American experience has proven that entrepreneurs are the driving force of our economy, and probably many economies, and it is entrepreneurs, business leaders, business owners and young – and also middle-aged – entrepreneurs like you in this room today who are driving Romania’s future.

Before I conclude, let me first congratulate the ambition, the dream that Ionut and Ioana and the organizers of today’s conference have – that is not only to create an ecosystem here in Romania for Romania’s sake and bounded by the Romanian economy, but actually to create opportunities for you, for Romanian entrepreneurs to play on a global scale.  That is tremendous, that is your dream, your ambition, and I very much applaud you for that.

A very important partner for us is the Romanian-American Foundation.  Their work really is focused on Romania and not scaling up to encourage Romanian entrepreneurs to think globally, but nevertheless, that is a potential consequence of the work here, but they support Junior Achievement who does work in Romanian high schools, teaching science in both the Romanian primary schools and high schools.  They have been the sponsor of First Nation Robotics, which has been very impactful in Romania.  You probably heard that several weeks ago a high school from Hunedoara won a global competition in robotics in Mexico City.  This was a high school that benefited from First Nation Robotics program that was supported by the Romanian-American Foundation along with other sponsors.  The Foundation has also managed now a multi-year program to send both administrators as well as professors from Romanian universities to the United States, to Rochester University in New York, to specifically be trained on how to better teach entrepreneurship in Romanian universities.  And several years ago, together with a number of partners, the Romanian-American Foundation was the sponsor of a program that really tried to focus on this question of technology transfer – how to improve the regulatory and legal infrastructure here in Romania to make it really possible, but hopefully much easier, to take bright ideas that are developed within the university framework and then transfer them to the private sector, and allow young entrepreneurs to develop those ideas and scale them up and provide quick products and services to not only the Romanian economy, but the economy around the world.

We were talking earlier, before we started, about Alianta, a group of Romanian diaspora communities in the United States.  I am mentioning them, because one of the things that we considered doing several years ago was to use Alianta members to provide mentorship programs here in Romania.  It is something that never really got off the ground, but I encourage Ionut and Ioana to maybe explore rebuilding that effort and making it successful.

And also I just want to mention that the United States Government, not just here in Romania, but the Government has been an important sponsor of the Global Entrepreneurship Forum, and last year it met in India.  The Embassy provided sponsorship for three young Romanians to attend the Forum.  This was very much a program that was supported by the Obama Administration.  I am not exactly sure what the future of the forum will be, but I hope it does have a role to play and it is again a platform where young Romanian entrepreneurs can both share their experience but then learn from a global entrepreneurship community, about both obstacles as well as opportunities that entrepreneurs face around the world.

Thank you for your patience, and I wish you and the forum and all the participants great success!