Home Prima pagină | News & Events | Civil Rights In America, And In Its Cinema: From Birth Of A Nation To Selma 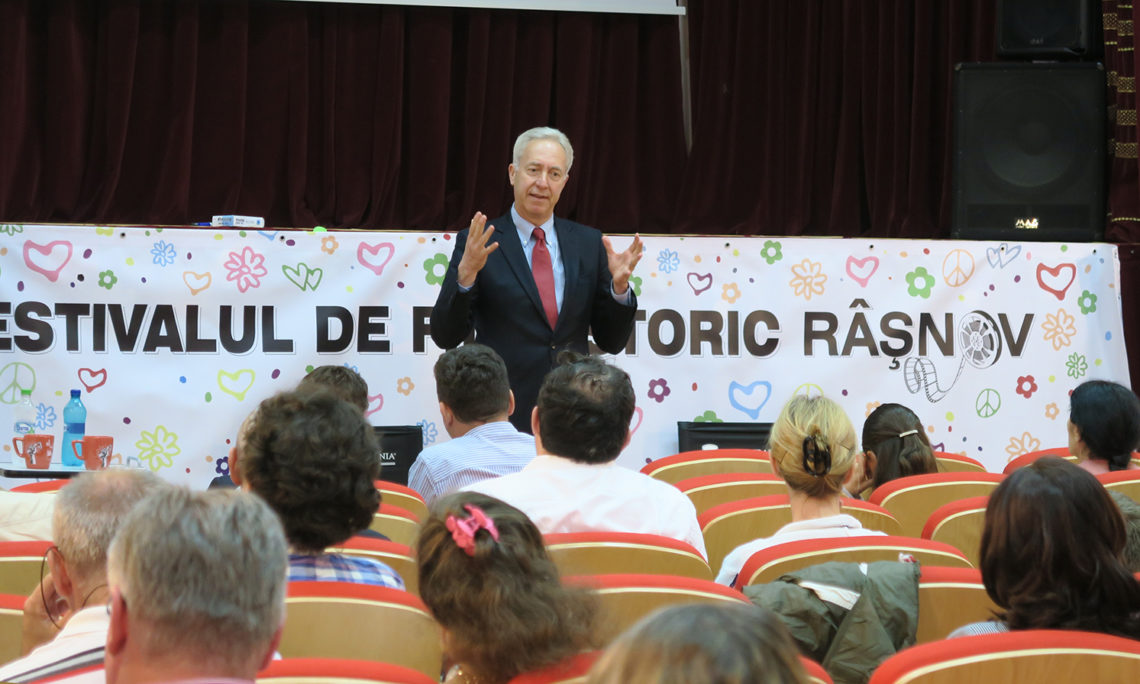 Good Morning Everyone. Thank you Sorin for the lovely introduction and I would also like to thank the Rasnov team for inviting me here to speak today. Dignitaries, distinguished guests, students, ladies and gentlemen, I am pleased to be at such a monumental festival to discuss civil rights in America as demonstrated through cinema.

And now, please allow me to continue in English. Film is a unique art form that has the ability to reflect society and the power to sway popular opinion and adjust the status quo. As a result, the silver screen has been instrumental in the advancement of culture and the evolution of opinion. There are many films over the years which tell America’s story but the few that I have chosen to talk about today have been particularly instrumental in depicting America’s transition and progression as a society.

I will begin by discussing a pivotal film in American history, Birth of a Nation which premiered in 1915. It was the first 12-reel silent film sharing two very different families’ experiences during the American Civil War and Reconstruction Period in the 1860s. The film depicts the original founding of the Ku Klux Klan – a racist white supremacy organization – and is credited as being an important driver in the formation of the “second era” of the Klan. The African-American characters in the film, some of which were played by white men in “blackface”, were portrayed as unintelligent and sexually aggressive. These overtly racist themes caused the National Association for the Advancement of Colored People (NAACP) to protest the premier of the film and attempt an unsuccessful ban on the movie causing riots in several major U.S. cities shortly after its release. Although the malicious nature of the film motivated white gangs to attack and kill African Americans, movie goers flocked to the theaters to see the film because it was unlike anything that they had ever seen before.

Another film, Gone with the Wind, was produced in 1939, but illustrated the same period and place as Birth of a Nation. The most controversial aspect of this film was also its depiction of African-Americans; it portrayed them as either loyal and happy slaves incapable of independence or as disreputable, gullible and political pawns. While the film displayed African-Americans in a negative light, it did mark an opportunity for African-American actors and enabled their connection to audiences. Some experts believe that Gone with the Wind undercut racial stereotypes, improved engagement between Hollywood and black audiences and even became a model for measuring social change. The film set a record for Academy awards winning 8 of its 13 nominations. The Award for “Best Supporting Actress,” went to Hattie McDaniel, the daughter of two former slaves and the first African American woman to take home an Oscar for her role of Mammie. In her acceptance speech, ironically given at a segregated hotel, she said “I sincerely hope I shall always be a credit to my race and to the motion picture industry.”

History collided at Gone with the Wind’s premier in Atlanta. Confederate Civil War veterans and a young Martin Luther King Jr. were both present at Lowe’s Grand Theater. The elderly Civil War veterans viewed a film showcasing their efforts at cessation, while King sang in the premier’s choir.

A few decades later, in 1967, the American comedy-drama, Guess Who’s Coming to Dinner, premiered. A self-proclaimed, “love story of today,” the film portrays a romantic relationship between Sidney Poitier, a black man, and Katharine Houghton, the daughter of a white liberal family in Los Angeles. While a movie about an interracial marriage was a controversial issue at the time, Guess Who’s Coming to Dinner was a widespread success and became a box-office hit throughout the States, including in the South. Prior to his work on this film, Poitier had become the first African-American man to win an Academy Award for ”Best Actor” for his role in Lilies of the Field, in 1963. Just as it would be hard to imagine Poitier winning Best Actor, without Hattie McDaniel winning “Best Supporting Actress” first, it would have been impossible for audiences to imagine Poitier “coming to dinner” before they related to and empathized with McDaniel’s character of Mammie. Guess Who’s Coming to Dinner’s positive representation of interracial marriage, which was still illegal in 17 states at the time the film was produced, was truly groundbreaking and viewed as a tremendous step toward equality and understanding.

Just a few years later, in the early 1970s, the roles of African American in cinema had progressed significantly. In fact, in 1971, the film “Shaft” was not only produced and directed by Gordon Parks, who was the first African-American to produce and direct major motion pictures, but also starred Richard Roundtree. Roundtree played the role of Shaft, a private detective hired to rescue a Harlem mobster’s daughter. Described as “Hotter than Bond- Cooler than Bullitt,” Roundtree is considered by many to be the “first black action hero.” Shaft was the third film of the “Blaxploitation” genre, which was created by Gordon Parks, to share the difficulties faced by young African Americans. Although the genre was originally tailored specifically to urban black audiences, its appeal soon broadened across racial and ethnic lines. The movie was extremely successful in theaters, among all audiences, and is heralded as a breakthrough production in terms of expanding black representation while exploring the complex issues around race in America in a more authentic manner.

Just three years ago, 12 Years a Slave appeared in theaters and shined a bright light on the American institution of Slavery. The film, based on the memoir of Solomon Northrup, described his real life trials and hardship. Once a free African-American who was drugged and sold into slavery against his will, Northrup was forced to experience the life of a slave for 12 years, until his identity was affirmed. This is a film that can be uncomfortable to watch at times and forces the modern day audience to witness slavery through the eyes of someone who earlier had lived his life as a “free man”. This harrowing portrayal causes viewers to empathize with Northrup and, for most, adopt a new understanding of slavery and the lives of slaves. It demonstrates the historically accurate account of slavery, rather than its glorified depiction in Birth of a Nation and Gone with the Wind.

Many of you had the opportunity as I did to see the award winning movie, Selma this morning. The importance of Dr. Martin Luther King in our country’s journey toward achieving racial equality is clearly documented and important to note. Born in 1929 in Atlanta, Georgia, Dr. King’s religious and personal convictions led him to be socially active and concerned with the plight of his fellow African-Americans. During his lifetime, the practice of segregation was legally enshrined and African-Americans were unable to vote, which for Dr. King meant an inability to control their own destiny.

The film follows Dr. King and other’s historic march from Selma to Montgomery Alabama to gain equal voting rights for all African-Americans. During their first attempt to march, King and his fellow marchers were attacked with clubs and tear gas by state troopers, who were determined to stop them at any cost. The brutal assault was captured by the press and displayed on national television, a move that triggered public opinion to sway in the favor of the marchers. This momentum allowed Dr. King to obtain a court order permitting them to march for the second time without interruption. Eight days after the first failed attempt, President Johnson delivered a televised address supporting the Voting Rights Bill aimed at prohibiting racial discrimination in voting. The dramatic conclusion of the film takes place at the Alabama state capitol with King’s impassioned speech “How Long, Not Long” vocalizing his plea for equality.

Each film that I have mentioned today has been a part of the progression and a form of evolution. In many ways, each movie required its predecessor and although America and its cinema have evolved overtime to become more equal and just, we still have work to do. As we watch the unfolding of civil unrest and racial injustice in cities and towns across America, I am reminded of exactly how much work still remains. I hope that American film continues to document these realities present in our nation, so that we may view these issues through multiple lenses and learn from the past. Perhaps 20 years from now, another U.S. Ambassador will be standing here in my shoes at this historic festival viewing and reviewing films depicting the inequalities that face modern day society. However, we have made great strides in the pursuit of equality, many of which can be seen through its cinema. Films such as Selma and 12 Years a Slave would have been impossible, even unthinkable to produce 50 years ago.

In closing, and in light of recent events and the discussion on race that is currently running in the United States, I would like to summon the words of Dr. Martin Luther King, who, when speaking on the subject of progress and equality in Selma in 1965, said “We have no alternative but to keep moving, we’ve gone too far now to turn back and in a real sense we are moving and we cannot afford to stop… because our nation has a date with destiny.” We are still far from the ultimate destiny of equality for which we all aspire , but I believe that these films, these important pieces of art, have, and will continue to, propel us to evolve and progress to a point much closer than we once were.