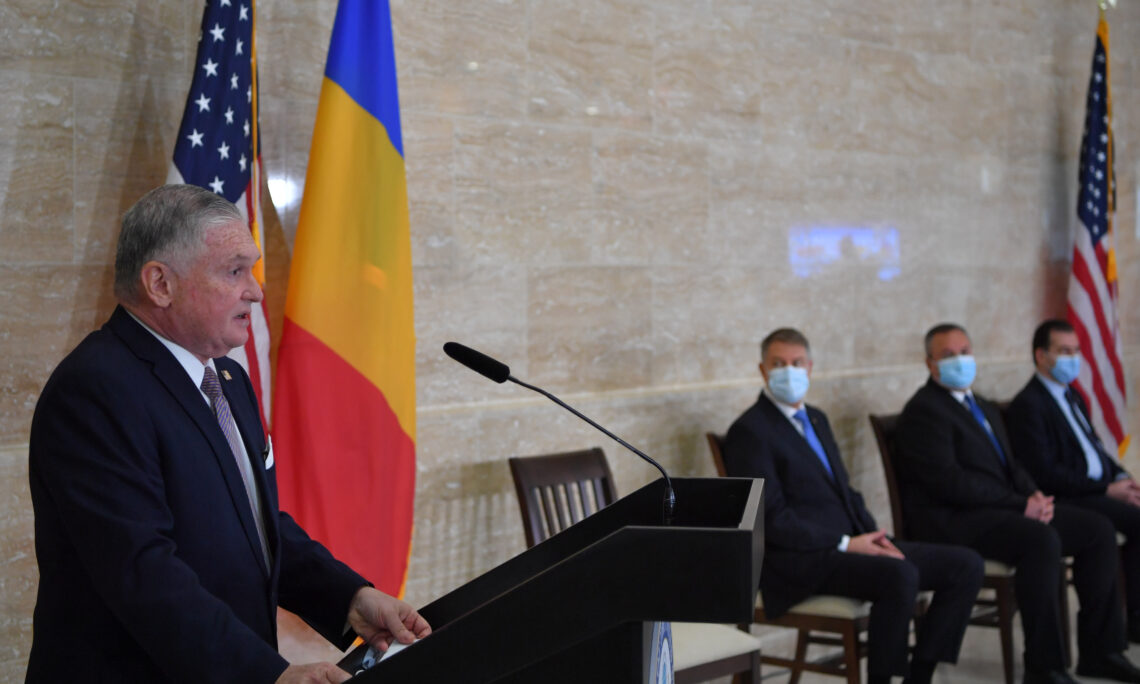 The Legion of Merit, it is the highest award the United States Armed Forces can give to a non-U.S. citizen. It is given for exceptionally meritorious conduct in the performance of outstanding service and achievement. Minister Ciuca, today you join a small, but very distinguished, group of medal recipients. This group includes heroes such as President Dwight D. Eisenhower, General George S. Patton and King Michael I of Romania. You richly deserve to be among them.

Starting with his tenure as Chief of Defense, Minister Ciuca steadily solidified the bilateral relationship between our countries by encouraging collaboration, loyalty, and consistency. The relationship continues to be marked by mutual respect and rock-solid commitment to the preservation, security, and advancement of our two great nations. Under Minister Ciuca’s leadership, Romania achieved the ability to credibly defend itself and other members of the NATO Alliance against threats to its territorial integrity and citizens. Minister Ciuca also understood the necessity of a strong economy to a strong defense posture and has helped advance Romania’s economic prowess by expanding research and development capabilities through the defense sector. A strong economy makes for strong defense capability and a strong defense protects a robust economy. A strong Romania means a strong Europe and security for future generations.

To maintain and preserve freedom and democracy in the face of Russian, Chinese, and other malign influences, it is crucially important to maintain vibrant economies as well as effective militaries. The best ally the United States can have is a democratic nation that is strong militarily and economically. Strengthening the economic and security relationship between Romania and the United States are crucial priorities. I commend Romania’s commitment to long term stability and focusing not only on military readiness, but economic development as well. Minister Ciuca has developed the Romanian Armed Services into an effective forward-looking strategic and comprehensive defense force.

In just a few months, Romania will receive and deploy the state of the art high mobility artillery rocket system, HIMARS. Romania will be the first NATO Ally to receive and deploy HIMARS – this is another reminder of the special relationship Minister Ciuca crafted between the United States military and Romania military. By incorporating the HIMARS system into its defense strategy, Romania solidifies its place as a guarantor of European and Black Sea security. HIMARS is also an integral piece in Romania’s defense modernization program which includes F-16s, Blackhawk helicopters, Piranha armored vehicles, the Naval Strike Missile, Maritime Domain Awareness, Anti-Submarine warfare equipment and the Patriot missile system.

The Patriot missile system is a battle-tested, modern surface-to-air missile system that is primed to face the threats of the newest round of great power competition. Romania is at the tip of the spear, being the first partner in the Black Sea region to host the Patriot system. The Patriot represents one of Europe’s greatest shield’s against emerging threats. It is also an integral piece in Romania’s defense modernization undertakings, all of which are buttressed by Romania’s respected training centers, military educational institutions, and human resources management. Romania’s collective efforts over land, air, sea, cyber, and human domains enhance its ability to advance and expand security on NATO’s eastern flank. This assures a high-level of readiness for unforeseen threats.

On October 8th of this year Minister Ciuca traveled to Washington, D.C. with me where he and Secretary of Defense Esper signed a 10-year “Roadmap for Defense Cooperation” between Romania and the United States. This agreement formalizes our bilateral strategic priorities and establishes the framework to build the capabilities and military readiness of our two nations. The ties between our two countries have never been stronger. Romania’s military readiness and capabilities will continue to increase. The U.S. will continue to support the modernization and interoperability of Romania’s Armed Forces and continue to assist Romania in defending itself and Allies in the Black Sea region. This includes the continued rotation of U.S. forces in Romania. The United States and Romania are stalwart Allies and will continue to strengthen their military capabilities and readiness with continued defense cooperation to ensure peace and security in Europe. The United States is committed to stand, and will stand, shoulder to shoulder with the people of Romania.

The Ministry of Defense, under Prime Minister Ciuca’s leadership, in a sign of true friendship, sent a medical team to Alabama earlier this year to assist Americans dealing with the pandemic. This gesture has not been, and will not be, forgotten by the American people.

Romania has also consistently remained committed to deploying troops and resources to operations in Iraq, Afghanistan, and Mali in the fight against terrorism. There is no doubt Romania is a true Ally of the United States. Minister Ciuca is the perfect embodiment of our friendship and partnership. It is no wonder the United States has given this award to such an accomplished professional soldier and statesman. On behalf of President Trump and the American people I would like to offer our sincere congratulations on your achievements, your vision, and your friendship.

Thank you, and God bless you.