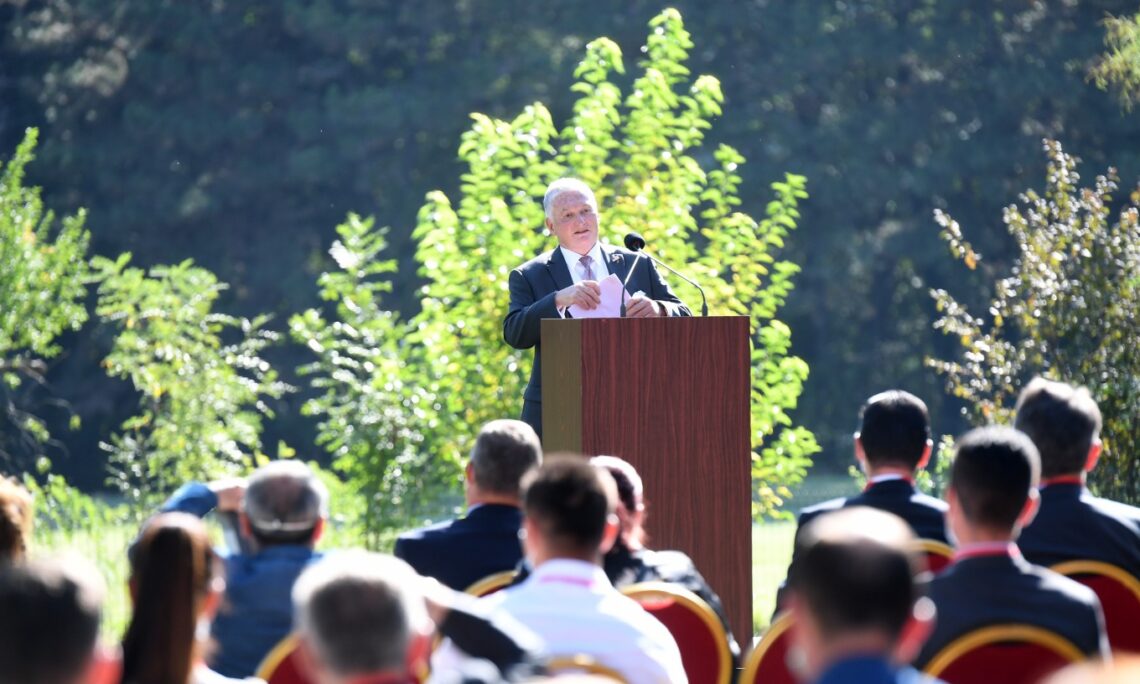 It is a pleasure and honor to be here with the Prime Minister, distinguished experts, guests, and friends. Thank you to MediaUno and the National Institute of Statistics for organizing this event.

The global crisis that has enveloped us is without precedent. It has battered our people, our national economies, individual businesses, and our daily lives. By their nature, crises are unforeseen circumstances – often of great magnitude that do not appear to have immediate solutions, but that does not make them insurmountable.

Time and time again over the last century, the United States and freedom loving people around the world have been tested by great adversities. The United States has been a world leader, helping its friends and allies prevail over such adversities – whether the Spanish Flu, World War I, the Great Depression, World War II, the Cold War, or the financial crisis of 2008.

It is the hallmark of free democratic societies to overcome such big challenges and chart a path to peace and prosperity. American exceptionalism has been a paradigm for problem solving, innovation and democracy. Innovation and creativity spawned by free markets have led the world in transcending one crisis after another.

The United States helped usher in a new era of hope for many countries, including Romania, as they escaped the clutches of Communism. It is the principles of a democratic free market economy that have given us the fortitude and wherewithal to face and overcome these challenges. These same principles have assisted developing Romanian exceptionalism. President Iohannis and Prime Minister’s Orban’s steadfast dedication to the rule of law, business transparency and free market democratic principle have propelled Romania to become a European leader. In conjunction with more and more joint undertakings with the United States Romania is seeing its long awaited, and well deserved, renaissance in the arts, sciences and industry. It is now taken for granted and well accepted that the United States has no better friend than Romania and Romania has no better friend than the United States. We share common goals and values and together we shall prevail over all adversities, including Covid-19.

COVID-19 is a new challenge and it is dire, but it is beatable—just as every other threat we and our allies have overcome in the past was. Together, the United States and Romania have met this challenge head on and will overcome it. I have great faith in Romania’s people and their ability to achieve an exceptional destiny. Romanian exceptionalism and leadership exude from the nation’s highest offices to its smallest communities. The continued adoption of pro-market business policies and privatization, not compromising on the rule of law, and continued commitment to root out corruption and the last vestiges of communism has advanced Romania and its people. I commend all, in and out of government that share the same values and seek the same goals.

The United States Government has allocated more than $20.5 billion to drive the international response to this pandemic. This includes American commitments to vaccine development, therapeutics, preparedness efforts, and direct foreign assistance. The United States continues to ensure that sufficient funding and scientific expertise remain at the forefront of the international efforts against COVID-19.

Our global leadership isn’t by chance – it is by choice. Because free nations produce prosperity, unmatched generosity, and aid that truly helps people survive and thrive. We call our lifesaving aid an “All of America” effort. We call it this because it includes all parts of American society: government, NGOs, charities, churches, synagogues, mosques, and the most vibrant private sector that has ever existed in the history of the world.

Similarly, Romania has also undertaken many programs to fight Covid. Romanian medical institutions are hard at work not only seeking a vaccine for Covid, but also trying to improve patient treatment of those afflicted by Covid. Romania has sent aid to many countries to assist with Covid relief. As part of that program Romania sent a team of doctors, nurses and specialists to the United States to aid Covid patients and to exchange lessons learned and best practices.

The United States military is on the front lines too. Building field hospitals when necessary in Europe and Africa, filling gaps when health care facilities reach capacity and assisting local authorities all around the world. Our troops have worked closely with Romanian armed forces and other allies to move critical medical inventory and equipment. The heavy airlift command flew tons of personal protective equipment to Romania and elsewhere in the early phase of this pandemic.

The United States is also generous with American scientific expertise. The U.S. government worked with publishers and major technology companies to release, at zero cost, the world’s largest collection of scientific articles on COVID-19. Experts have downloaded the dataset more than 54,000 times and made available more than 1,000 AI tools to accelerate research into vaccines, therapeutics, and other critical scientific questions. Through Operation Warp Speed, the United States has revolutionized the clinical trial process for vaccines and has invested over $10 billion into seven major vaccine candidates which we aim to have ready for distribution before the end of this year.

In like fashion Romania retooled and developed its own domestic industry to deal with these problems. Personal protective equipment, ventilators and other necessities started being manufactured in Romania. Now, in a very short time, Romania went from having no production capacity of these items to being an exporter of these items.

This could only have happened in a free market economy. Free market economies around the world have built more wealth, saved more lives and elevated more standards of living than any other system bar none.

Our All-of-America approach also includes the generosity of private businesses, nonprofit groups, charities, faith-based organizations, and individuals, as well as the ingenuity and entrepreneurial spirit of our innovators. Together, these businesses and organizations have provided $4 billion in donations and assistance to combating COVID-19, accounting for nearly 80% of the world’s global philanthropic efforts. This system has been adopted by many Romanian companies and entities. A great example of this is UIPath, a Romanian global technological leader that has supported the fight against Covid in Romania and other countries.

Now contrast this approach with that of authoritarian regimes. It has now been over eight months since COVID-19 escaped from the Chinese city of Wuhan. Since the failure of the Chinese government to contain the initial outbreak, the virus has spread to the four corners of the earth and the subsequent damage to our economies, our people, and our countries has been incalculable and unprecedented. While Russia deceives its people about the origins of the virus, China is denying the facts and spreading vicious lies and conspiracy theories through fake news outlets that attempt to blame the West for the pandemic. People are dying and these cynical tyrants are trying to gain from the crisis when other nations are vulnerable. There is no strategic gain nor profit to be made from this tragedy – shame on both of these countries. It really is just another example of their continued aggression- it is particularly distasteful, even for them. All countries should act with the interests of humanity in mind and not seek a commercial or other advantage amid the pandemic. Sadly, the lies, disinformation and propaganda continue. However, as we have seen in the case of Huawei the people of the United States and Romania recognize the communist Chinese lies and are saying no to them.

The battle continues. The United States and Romania remain standing together as great partners. We are pulling through these dire times together and we are continuing to rebuild our economies and move forward together. The Strategic Partnership between Romania and the United States has never been stronger. In response to the current pandemic, we have provided $800,000 in direct funding to the Romanian Red Cross to support Romania’s COVID-19 response and to increase institutional resilience in underdeveloped rural communities. Additionally, American companies are not just guests in Romania, they are a part of its communities. American and Romanian companies have contributed millions of dollars in funds and millions more via in-kind contributions to Romanian charities and NGOs.

The fight against this virus is far from over. The risk of new clusters and surges is real and ever-present. We must work together to share best practices and technologies. President Trump and the American people remain committed to working with Romania in the fight against COVID-19 and every other national security threat that menaces the United States or Romania. The United States and Romania are committed security partners to ensure Romania’s border integrity and Black Sea regional security. The United States and Romania also assiduously pursue economic development initiatives and projects together to develop Romanian national prosperity.

We have faced these threats together and we are defeating them together…whether it be the Covid virus or aggression from hostile nations and malignant actors. We have already started to turn the page on these dark days and moved on together to rebuilding our countries and economies. Free and democratic countries which allow the individual to soar and prosper achieve greatness. Romania will continue to achieve greatness and its renaissance.

Thank you. God bless you and God bless Romania and the United States.