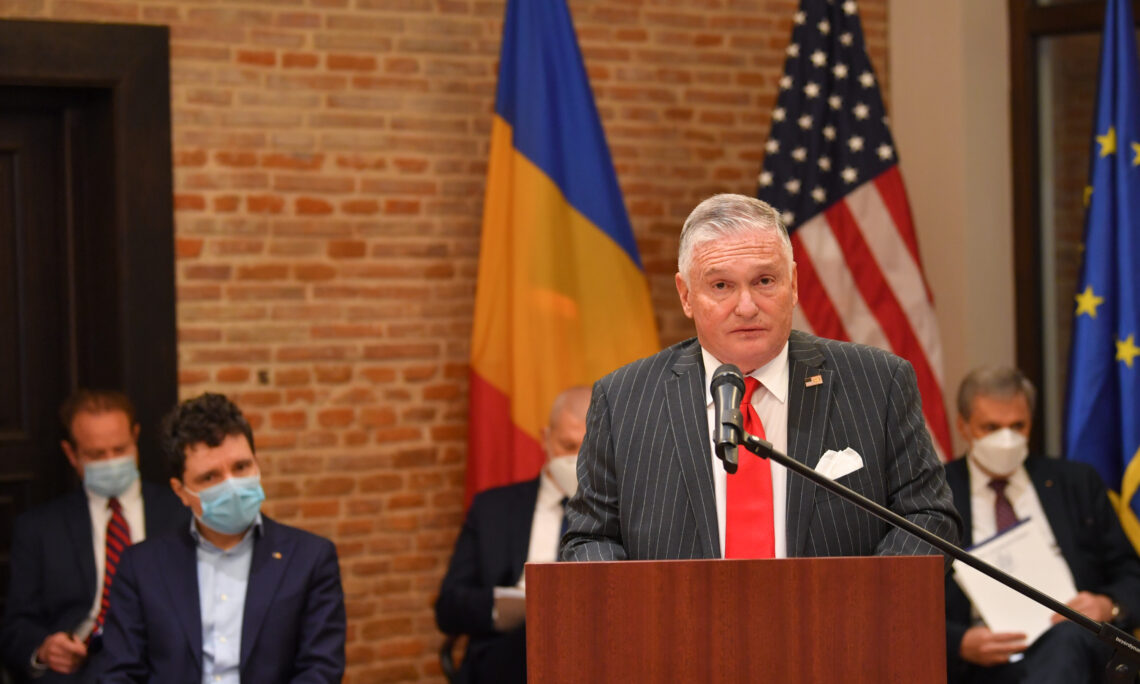 Today marks a positive, historic, and monumental achievement in the fight against human trafficking within Romania. It is fitting that we gather here on International Human Rights Day, for today Romania has taken a historic step in protecting and advancing human rights.

On behalf of President Trump and the United States of America, we applaud the Romanian government, President Iohannis, Prime Minister Orban and acting Prime Minister Ciuca, the National Agency against Trafficking in Persons, Prefericitu Daniel and the Romanian Orthodox Church, Mayor Nicusor Dan and the City of Bucharest for what you all have accomplished here today. The agreements that you signed – pledging to work together to fight human trafficking – are truly historic and mark a new path of achievement and cooperation.

Human trafficking is the embodiment of evil. It is barbaric, it is cruel, it has no place in civilized society. Human traffickers around the world – including organized crime groups here in Romania – prey upon our fellow citizens – men, women and young children who are subjected to forced labor and sexual exploitation as a result of violence, fraud or coercion – all so that criminals may profit. Human traffickers prey upon all segments of society, but they especially prey upon the most vulnerable. It is an intolerable situation and we reaffirm today that human trafficking must not, and will not, be tolerated.

As stewards of the public trust, we owe a sacred duty to our citizens to remain resolute in our efforts. The agreements signed today by the Church, ANITP, and the city to join forces to combat human trafficking – and the demonstrated willpower they embody – are a clarion call that the neglect and complicity of the past that allowed human trafficking to thrive has been rejected and cast into the ash heap of history.

There is a new dawn breaking in Romania, a new approach to addressing the human trafficking sins and omissions of the past and seeking a better way forward. When we pledged to work together, we knew there was a better way, and working together we are achieving it.

We applaud the work of the Romanian Government in their renewed fight against human trafficking. The steps taken this year by former Prime Minister Orban, Justice Minister Predoiu, Interior Minister Vela and others to combat human trafficking have been substantial and real. This year, the government has taken numerous initiatives focused on making the investigation and prosecution of human trafficking a priority, ensuring law enforcement has the necessary training to do their job, improving the assistance provided to the victims of human trafficking and ensuring criminals are punished appropriately and that the ill-gotten gains of their crimes are seized.

We are heartened by the many recent successes of prosecutors and law enforcement officers from DIICOT, DCCO and others in tackling organized crime and human trafficking. Romania has sent a clear message: human traffickers can no longer take advantage of their fellow human beings with impunity, but rather they will – and they must – suffer severe consequences for trying to do so.

We also applaud the Government, the Orthodox Church, and the City of Bucharest in their efforts to shine a spotlight on the issue of human trafficking, and by working together – and also reaching out to non-governmental organizations – to address the critical needs of the victims and by placing greater emphasis on prevention, protection and care.

Bishop Varlaam Ploiesteanul, thank you for joining with the Government and City in this fight against human trafficking. The Church has a special place within Romania and your help is welcome and vital. Thank you.

Mayor Dan, thank you for your work here today. In your short time as mayor, you have demonstrated true leadership and your efforts here today to address human trafficking will help to protect and care for the victims and will also hopefully serve as a model for other cities throughout Romania to emulate. Thank you very much.

Max Nicolae, thank you for being a party to these agreements and for the hard work ANITP has done – and has pledged to do – to combat human trafficking and to protect and care for the victims. ANITP is an essential partner in this fight. Thank you.

Finally, I want to thank my staff at the U.S. Embassy, the U.S. Department of Justice, and the FBI for your tireless work and for being a partner with Romania in this epic fight against human trafficking and organized crime.

Human trafficking is an evil that cannot and will not be tolerated. The path to defeating human trafficking is long and difficult and the fight is not yet over. Citizens of Romania, there is more to do. We will not shirk from these challenges – be assured, we will overcome them.

The substantial steps taken by the Romanian government, the Romanian Orthodox Church and the City of Bucharest are the right ones and we should all take a brief moment to recognize the history that was made here today in the fight against human trafficking. I foresee and pray for the day when human trafficking is extinguished from our world. I do not know when that day will come, but with efforts such as these, I know that it will.

The United States is proud to be Romania’s ally and best friend. Resolutely we stand – and always will – shoulder to shoulder with you in the fight against human trafficking and all other undertakings.

God bless you, God bless Romania, and God bless the United States. Thank you all very much.