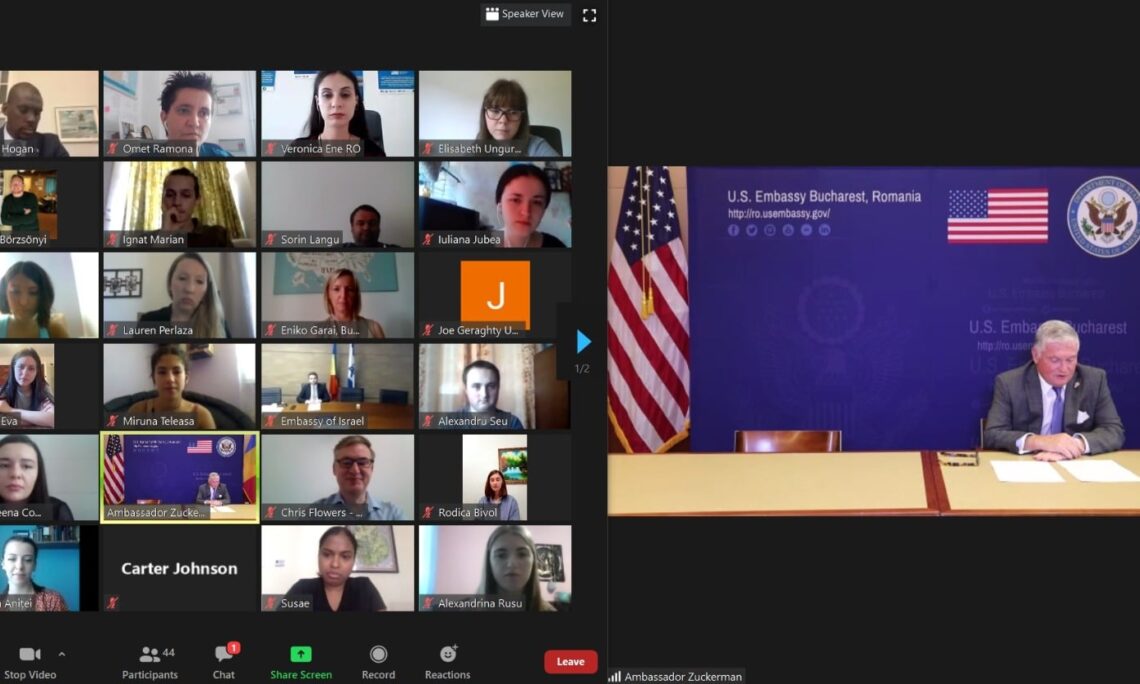 Good afternoon everyone and thank you for inviting me to join you today. I also thank you Veronica Ene, your efforts as the Romanian ACILS representative are as tireless as they are important and, you Dr. Alexis Herr, thank you for all you do.

And all of you. I know these are challenging times and I appreciate your willingness to stay the course with this program. Your choice represents a significant commitment—a commitment not only of your time, but also a deep emotional commitment.

I understand that you gathered here were selected from a large group of applicants, and I congratulate each of you. You were selected because you bring something unique to this program and because we have faith in you. But please understand something, storytelling is central to the Jewish faith, and I am personally asking every one of you to return from this program as a storyteller.

You will return home uniquely schooled in the horror our species is capable of and with stories of individual lives stolen as well as with incredible stories of bravery and altruism. Share them all.

The brilliant Polish American lawyer Raphael Lemkin—the man who gave us the expression ‘genocide’—wrote about our tendencies to simplify genocide, even while mourning its victims. I have seen this in America, and I have seen it here. In terms of the Shoah the world blames the Germans, the Germans blame the Nazis, and the Nazis blame their leadership. This dishonors the defining horror of the 20th Century. The Holocaust did not begin with the Wannsee Conference when the murderous henchmen of the equally murderous Himmler decided upon the Final Solution for the Jews of Europe. No. This explanation is too simple and too trite. Germans and others were not motivated to murder their countrymen and neighbors by the millions with the stroke of a pen. Their actions stemmed from something far more profane and insidious.

We can talk about the bestial pogrom in Iasi in 1941, but what about the Romanian pogroms of the 1760s or during the 1821 Wallachian Uprising? My point is not to shame any one country—Lord knows few, if any, have escaped anti-Semitism or ethnic hatred—rather, I wish to show how the causes of the Holocaust are deeply rooted on this continent and how the flaws that made it possible haunt us still.

As early as 1933 the National Deutschland Socialist Party had discovered the political benefits of stoking the racial and ethnic hatred that coursed throughout Europe. German Jews immediately began to bear the onus of over 400 laws that would systemically undermine, alienate, and otherize them in their own nation. The same year the Reichstag burned; Dachau opened. It opened as a concentration camp for political undesirables, and we all know how it ended. In April that same year, Jewish books were boycotted, two years later many Jews protested when the faith of the Jehovah’s Witness was outlawed, but it was already far too late. German Jews were stripped of their identity over the decade and denied their humanity.

Jewish war heroes were slowly denigrated, property rights denied, voting rights were peeled away layer by layer, until they were a voiceless mass.

History reveals that the world knew far more than has been acknowledged. The story of the M.S. St. Louis is a shameful moment in my nation’s history, and the stories of the few escapees guaranteed the world knew what was happening. Moreover, the Nazi’s were not secretive about their acts. Why would they be—their non-Jewish population and indeed the world had largely stood by while their citizens were dehumanized.

This program is not meant to be a simple history lesson. As I mentioned, the motivations that allowed millions to be dehumanized and murdered still haunt us. We have all seen it. George Orwell wrote that in every joke there is a small revolution. Perhaps. So, I challenge you, in every racist or anti-Semitic act is there a touch of genocide? Perhaps we are overly concerned, and we needn’t be so vigilant.

I suspect the Bosniaks, the Yazidi, the Uighurs and countless others would disagree.

Bear this all-in mind on your travels. Return as storytellers for those in our past and our contemporaries who cannot speak for themselves and take the time to really think about the groups in your countries who are otherized and preyed upon.

Thank you again for your time participating in this program. Take what you see and learn and use it to make people more aware of the importance of respecting the dignity and the humanity of all people.

I wish you all safe travels.

Thank you. If you have any questions, please ask.