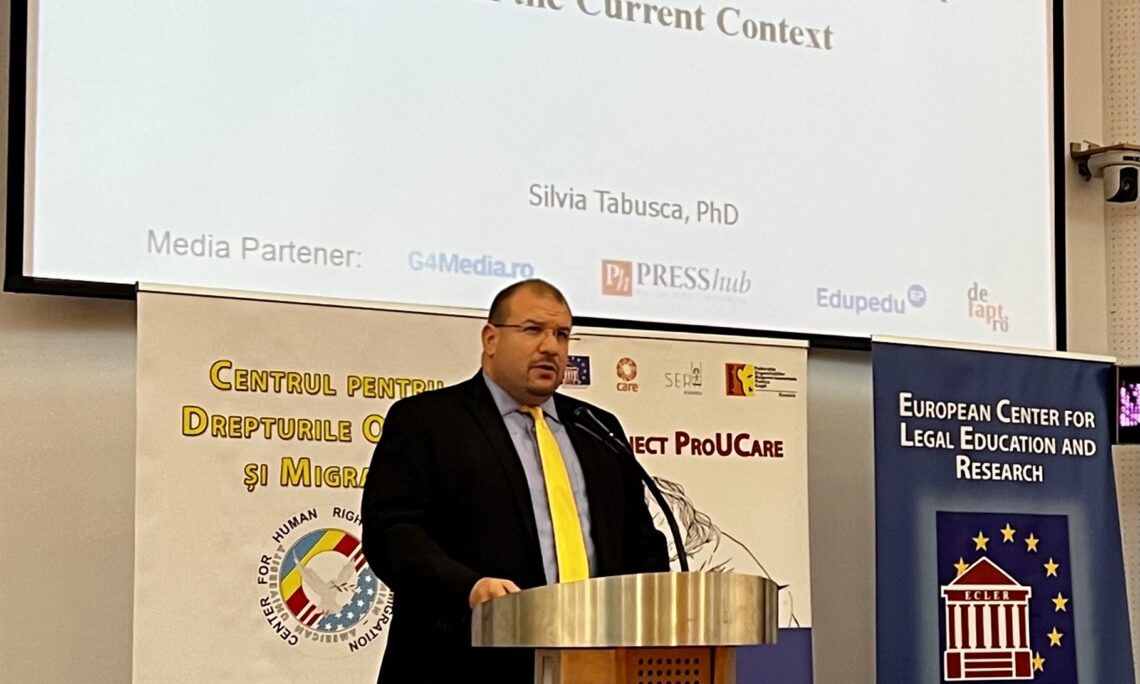 Good morning. I want to thank our hosts Dr. Silvia Tabusca, the ECLER NGO, and the Romanian American University for inviting me here today. I am grateful for this opportunity to applaud the efforts of everyone directly involved in the fight against human trafficking in Romania. As we know, Romania was removed from the Tier 2 watchlist on the State Department’s 2022 Trafficking in Persons report, which was good news. This was because of the combined efforts of so many people here in Romania, including many who are right here in this room. This led to significant progress combating trafficking over the past several years, including increased prosecutions of traffickers and better services for underage victims.

These were important steps forward. Still, Romania, like all countries, including the United States, can do much more to prevent human trafficking, to assist and support victims, and to hold criminals accountable and I think many of your remarks we have enjoyed listening to this morning only highlight the fact that there is a lot more work to be done in Romania to successfully tackle the problem of human trafficking. This conference is a strong reminder of how NGOs, international organizations, and governments can…and must…come together to share their knowledge and experience. We all know that combating trafficking and providing genuine protection of those who are exploited, or abused, and deprived of their freedom is only possible through collective and sustained effort. Certainly, I can tell you from personal experience Romania would not have climbed off of the Tier 2 Watchlist of the Trafficking in Persons Report without the sustained cooperation of so many entities here in Romania. And it is that cooperation that we’ve seen over the last several years that has paid off in very important ways and needs to continue.

Trafficking in persons remains a global scourge that takes many forms and targets our most vulnerable citizens–including a disproportionate number of children and women. An estimated 25 million people around the world are currently victims of human trafficking; it is a staggering number if you think about that, and this heinous business generates approximately 150 billion dollars per year in ill-gotten gains. I would venture a guess—I do not know for a fact—that both of those numbers are lower than what they should be, in reality they may be far higher, we don’t really know.

During the 2022 Annual Meeting of the President’s Interagency Task Force to Monitor and Combat Trafficking in Persons, Secretary of State Blinken reminded us that the impact of trafficking “extends far beyond those subject to trafficking into society as a whole. It erodes the rule of law, the safety of our communities, the security of our borders, and the strength of our economies.”

Traffickers are constantly adapting and have shown that they can quickly change their methods. They thrive in places where persistent corruption is present, preying upon the under-served, the unprotected, and the most vulnerable. They exploit outdated and biased attitudes towards ethnicity, gender, and victimhood. And they also capitalize on crises and instability. We already know that the COVID-19 pandemic led to increased online targeting and exploitation of children and had a significant negative impact on prevention, prosecution, and protection efforts.

More recently, Russia’s invasion of Ukraine caused millions of persons to desperately flee their country. Many of these are vulnerable persons – women and children, members of religious and ethnic minorities, the elderly, and LGBTQI+ persons – who are trying to escape the horrors of this unprovoked war of aggression. We saw how governments, NGOs, churches, and private citizens alike mobilized impressive resources and built new partnerships to assist these refugees. At the same time, we are well aware that in situations like this, predators seek to exploit the desperation of refugees and the displaced and lure them with promises of a better life only to then force them into commercial sex, forced labor, or domestic servitude.

Because traffickers adapt, we need to constantly ask ourselves: What, and how, do we have to change? Where have new gaps and new vulnerabilities emerged that we have to address? It will take relentless unstoppable collaboration and a commitment to stay ahead of the criminals and stop this crime before it happens.

The United States has a longstanding commitment to combatting human trafficking. Our most recent National Actional Plan to Combat Human Trafficking connects the mission of countering this crime to our broader efforts to advance equity and justice across our society.

As of August 2022, the State Department’s Trafficking in Persons Office manages 116 bilateral, regional, and global anti-trafficking projects in over 95 countries. We put real resources behind our efforts and have provided more than a million dollars in assistance projects to Romania over the last five years. We will continue to support Romania’s government and civil society in their own efforts to address human trafficking.