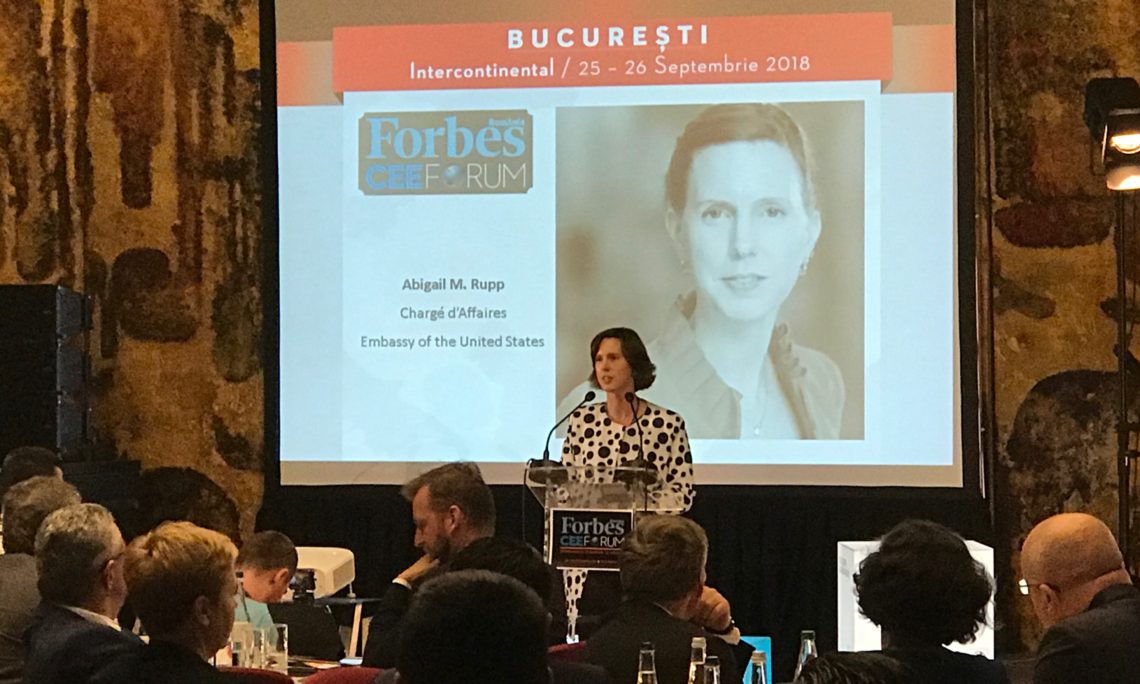 Thank you for the opportunity to be here today. We have a lot of anniversaries to celebrate: Forbes 100, this year the 100th anniversary of Romania’s unification, and last year we also marked 20 years of the U.S.-Romania Strategic Partnership. And a big piece of this Partnership has always been mutual economic prosperity. So I want to talk a little bit about that. The relationship between the U.S. and Romania is strong and growing, and we have the numbers to prove it. U.S. exports to Romania jumped 37% in 2017; Romania’s exports to the U.S. increased 12%, so a record high of $2.2 billion. That trend continues this year. U.S. exports to Romania in the first half of 2018 reached $529 million, and Romanian exports to the U.S. totaled $1.26 billion, up 19% compared to 2017. So, if this pace holds, we are on track for a record level of two-way trade this year.

As the U.S. Mission here in Romania, and with the headquarters in Washington, we try the best we can to promote trade in both directions. A couple of examples – now that Mr. Minister already kindly mentioned, our SelectUSA program. This is a U.S. government worldwide investment initiative to support foreign investment in the United States. It’s an enormous trade fair with representatives from every state. The Romanian delegation to SelectUSA this year was the largest in Europe and the fifth largest in the world with 45 delegates. And, we had a number of success stories, but one of them is with a company called the Alexandrion Group, which is planning a $40 million investment in upstate New York that will employ over 100 people.

Looking in other directions, we also promote American investment in Romania. One star example of that was last year’s Trade Winds program, which took place in Bucharest last October, and was the largest U.S. government-led trade mission ever to come to Romania. We had more than 150 representatives from 75 U.S. companies, and organizations had hundreds of business-to-business meetings. And building from that success, just last night Ambassador Klemm hosted a reception for another trade mission to Romania, this one from the state of Alabama. Alabama has a long-standing relationship with Romania as a partnership, particularly on military and security cooperation through the Alabama National Guard. We are looking to expand that relationship into economic and commercial ties with representatives from sectors including in the IT sector, the machine production sector, irrigation, and agricultural products, looking for ways that we can collaborate with American companies to move us both forward.

Over the past 20-plus years, Romania has been an attractive base for U.S. companies interested in accessing the European market. We are proud of the U.S. presence here in Romania. American companies invested and reinvested again, because they see a bright future here. The connection between our economies is already strong, but there is much more that we can do. This partnership, like any, requires commitment on both sides. Transparency, stability, and predictability are key principles to creating an attractive investment climate.

Continuing the fight against corruption, creating an investment-friendly business climate, and cutting bureaucratic red tape will serve to further improve this relationship. As Ambassador Ramis said, investors want a relationship with decision-makers, the Government, Parliament, and regulatory authorities, based on mutual trust. They want to have a conversation that validates their investment decisions by enabling their businesses to contribute to Romania’s sustained economic growth, create jobs, make a profit, and to grow their enterprise. And in return, investors bring capital, innovation, jobs, training, and revenue to the state, the private sector, and to the people of Romania.

When I talk to Romania’s business community, from young entrepreneurs to seasoned corporate executives, I am aware that you know the path that Romania needs to take regarding sound economic policy and rule of law, effective public administration, and investments in infrastructure, investment in health care, and investment in education. We will continue to work closely with our government partners, and with the private sector to advance reforms and efforts that should be supporting small businesses, young entrepreneurs, start-ups, education, and increased trade. Working together for a transparent, stable, and predictable economic policy is the best way to create an environment where investment can thrive.

Hearing the conversation today and meeting some of you today, I am confident that Romania will succeed in this endeavor.