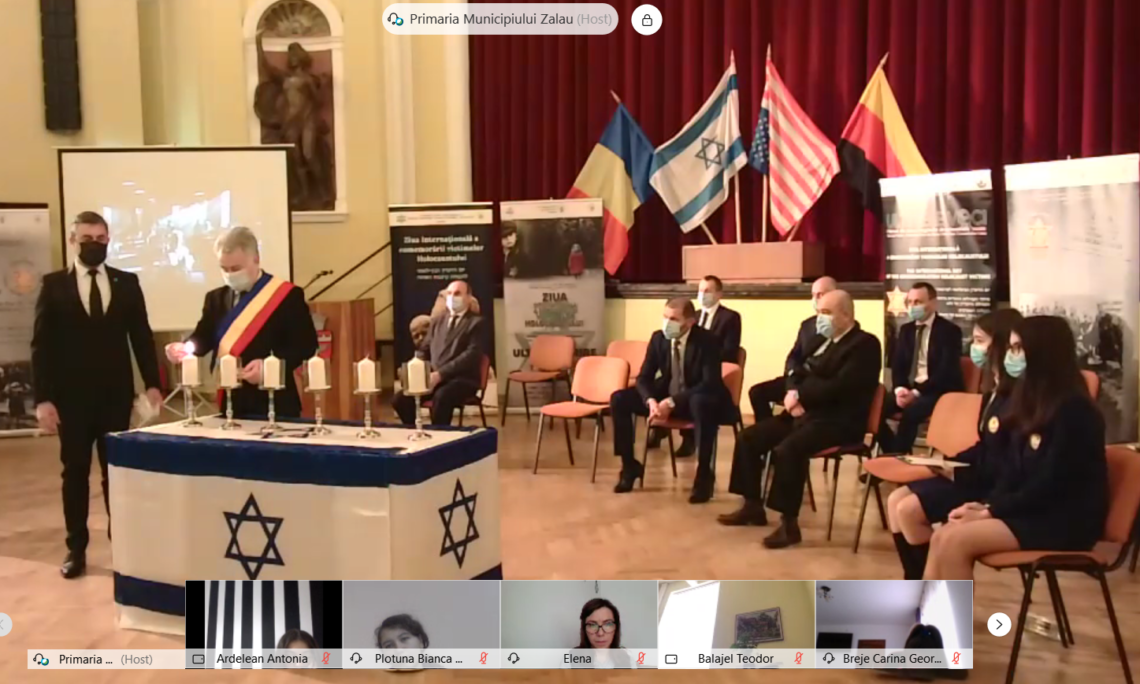 Good afternoon everyone. I would like to thank the Jewish Community of Zalau for giving me the honor to speak to you all today.

2021 marks 76 years since the liberation of the Auschwitz concentration camp in Nazi-occupied Poland and the conclusion of one of humanity’s most horrific chapters. Having personally visited Auschwitz, I can say that even today its horror remains evident and relevant.

As Elie Wiesel said, “to forget the dead would be akin to killing them a second time.” Remembrance is one debt we owe to the more than 130,000 Jews who were deported to Auschwitz between May and June 1944 from Hungarian-ruled Northern Transylvania; to the more than 250,000 Romanian and Ukrainian Jews and the 11,000 Roma who were expelled to their deaths by Romanian forces under Marshall Antonescu; and to the six million Jews across Europe murdered during the Holocaust.

Although it started in places like Zalau and reached a climax at Auschwitz, the Holocaust began in the hearts of ordinary people; it began well before 1944, and even before 1938. What occurred, in the lead-up to these horrid events, that allowed people to so dehumanize fellow human beings? Make no mistake: even today we see the forces of hate, division, bigotry and deceit threatening our society and shared values. There are people who spread racism and anti-Semitism, who insist the Holocaust never happened or who praise its perpetrators.

By confronting them with the truth, we rightly honor those who lost their lives during one of history’s darkest periods. This is the second debt we owe their memory: to ensure that such an atrocity can never happen again, that we speak out when we see injustice, racism, and prejudice. That we do not simply look the other way, or else, to paraphrase Martin Niemöller, if we do not speak out when others are at risk, there will be no one left to speak for us.

The United States will continue to support Romania’s efforts to teach youth about the Holocaust, with projects such as the Elie Wiesel Study Tour. The Romanian Government’s project to establish a Museum of Jewish History and the Holocaust is a heartening testament to the progress that Romania has made in coming to terms with its own past.

Today we stand together in solemn remembrance of those who fell victims to the unparalleled crime that was the Holocaust. Let us also stand together in our resolve to ensure that such evil never happens again, and that we will speak out.