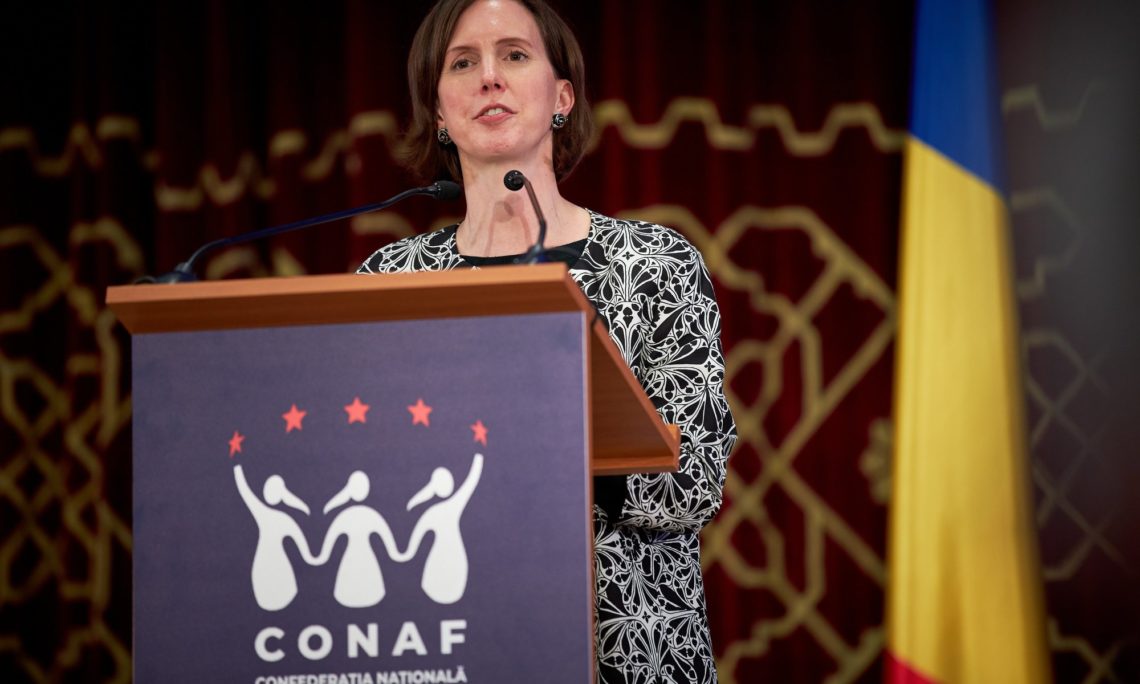 It’s a pleasure to be here tonight to talk about two things that are important to me – women and business.

As a government employee, people say we don’t know very much about the business world, but as my grandmother used to say: “I know enough to stay out of it!”

First of all, I want to give my thanks to CONAF, Cristina and her team for this wonderful event and for inviting me to be part of it. Congratulations to all those who won prizes tonight!

As a number of other guests have noted, this Sunday is International Women’s Day. What you may not have known is that one of the first International Women’s Days was in New York City, in 1909, when women were looking for one of the most fundamental rights – to vote, to choose their own government. Now, more than 100 countries celebrate International Women’s Day. We’ve come far; we still have more to do. For instance, less than one-third of all corporate managers, and less than ten percent of senior leaders, are women – despite the fact that women are – as you know — just as qualified and often better educated: In the United States, there are more women with Master’s degrees than men. So, we can look at this as a call to action. I don’t need to tell you the business case for gender equality. Unlocking the full potential of women in the world economy could increase the global GDP by more than one-third, to $28 trillion. That’s the equivalent of the combined economies of the United States, Germany, Italy, and Romania.

So, what can we do? This is a long-term project, and we all have a part in it. And it’s not just up to us, women. Men: you have to act as well.

We all can hire women, pay them equally, mentor our female colleagues and promote women leaders. We can refuse to tolerate harassment and any form of violence against women and girls. We can work to reduce gender biases and groups like CONAF are so important to Romania for these reasons.

All of you and others like you can help Romania make some significant steps forward, especially in the areas of technology and entrepreneurship. In the EU, Romania has the second highest proportion of female students in information and communications technology. And programs here are providing increased access for women to finance.

On the U.S. side, we will continue to do our part. The International Women of Courage Award recognizes women who have led in key areas like human rights, gender equality, and women’s empowerment. Some of those we honored here in Romania include Elena Calistru, from the NGO Funky Citizens, Ramona Brad, who has led anti-tobacco campaigns here, and many more.

We have the Women’s Global Development and Prosperity Initiative that has a fund and wants to reach 50 million women by 2025.

Last year, we launched an Academy of Women Entrepreneurs (AWE), that will support women entrepreneurs in Romania and around the world to give them the knowledge, the tools, and the networks they need.

And last June, we brought a Women Entrepreneur Roadshow here in Romania, where we had workshops, expert forums and other tools that would allow women entrepreneurs in Romania access and connections with venture capitalists and other investors.

We women are an emerging market force and we create innovation, jobs, and growth. We, at the U.S. Embassy are committed to being part of that team – groups like CONAF, all of you, the Government, and the private sector – to keep moving forward.

Thank you for the opportunity and good evening!