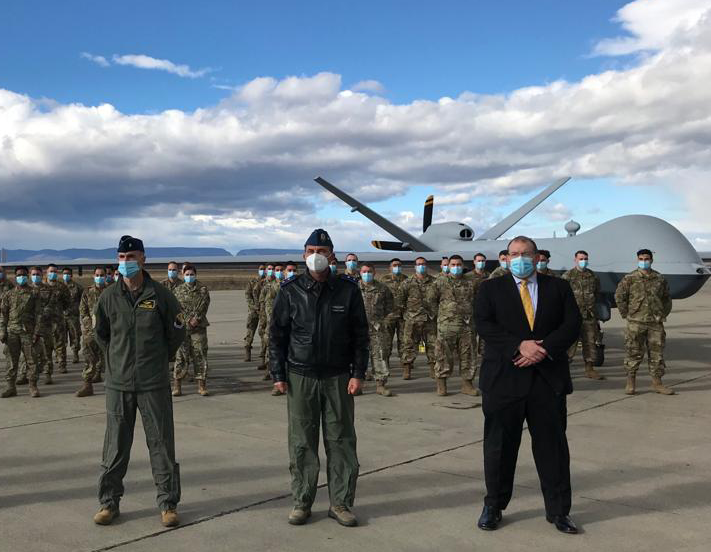 Thank you for joining us here today at Campia Turzii Air Base, and thank you to General Pana, Colonel Oatu, and the Romanian Air Force for hosting us – allowing us to once again showcase the outstanding partnership between the United States and Romania.

The United States Air Force presence here in Campia Turzii is a prime example of the continued strengthening of our security partnership and the investments in money, in hard work, and yes, in blood, that the United States and Romania make to keep this region and the Alliance safe in the face of present and emerging threats. Campia Turzii, in the heart of beautiful Transylvania, is one of the focal points for American investment under the European Defense Initiative. Since 2015, the United States has committed over $143 million dollars for upgrades to this facility, in order to enhance our support for bilateral and multilateral activities, provide for the collective defense of Romania and secure the Black Sea region. This is the third MQ-9 Reaper deployment to Romania, but more importantly, it is part of a long history of U.S. Air Force deployments here. This is also the 12th time the U.S. Air Force has deployed to Campia Turzii since Romania joined NATO in 2004. We hope this deployment is the start of an enduring Air Force presence in Romania. There is no substitute for our forward presence in Europe and having both U.S. and Romanian troops work side by side, which builds interoperability, trust, and common expertise. Forward presence is the bedrock of our ability to protect our allies, respond to threats, ensure support to global operations, and remind our enemies, current and future, that we are in this together. The United States is committed to NATO, the security of the Black Sea region, and to promoting a safe, free, democratic, stable, and prosperous Romania. We are also committed to supporting and building an even more capable Romanian military.

General Pana, we are proud to have an ally like you that is willing to stand with us to counter global and regional threats and malign influence, in order to secure the institutions and norms that we hold dear. Already we have seen Romania take more than its fair share of the burden in defense, whether in Iraq, Afghanistan, and Mali, or by sending military health experts to Alabama to assist us during the COVID pandemic.

On behalf of President Biden, I want to thank the Airmen gathered here today for your service, and also to thank the Romanian Armed Forces for their continued support of U.S. forces and our strategic partnership.

And finally, I would like to thank the Romanian people for their hospitality and warmth as they host the men and women of the United States military, a true testament to the deep friendship between our two countries.