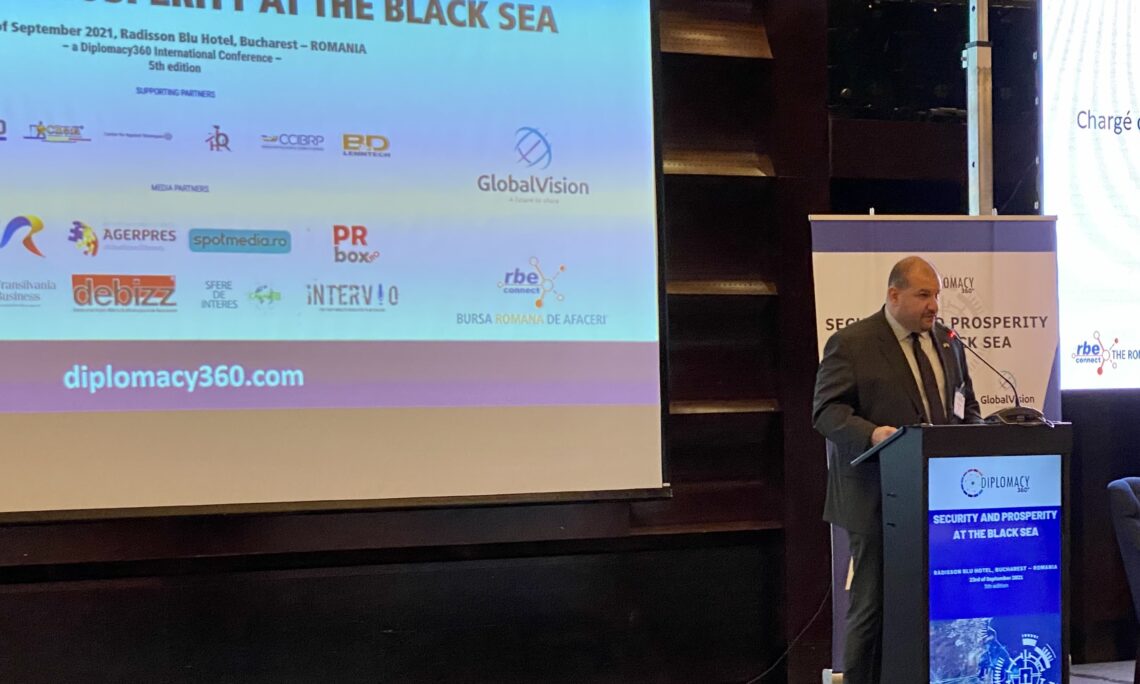 Thank you for the opportunity to join you today.

Nearly everyone listening is aware that our two nations recently celebrated the ten-year anniversary of the signing of two foundational bilateral documents: the U.S.-Romania Joint Declaration on Strategic Partnership for the 21st Century, and the Agreement on the Deployment of the Ballistic Missile Defense System. Together, these documents and their joint successes achieved under their auspices have enhanced Romanian prosperity while simultaneously strengthening European security and defense capabilities. They provided a structure, but we enjoy these concrete outcomes thanks to the efforts of many of you listening here today, in this room, as well as many who were unable to join us. You undertook daily the efforts that reaffirmed our partnership and in so doing allow our nations and our Allies to rest assured that its eastern flank is secure. You all have our collective appreciation for this effort.

Security and prosperity are inextricably linked…economic security pays for national security capabilities, which in turn protect and ensure prosperity. Adam Smith—the author of what many consider to be the second most important document published in 1776, known as The Wealth of Nations-stated that “The first duty of the sovereign is protecting society from violence and invasion.” He understood that open commerce and increased standards of living sought by free nations require both stability and national defense.

Romania and the Black Sea region are integral to Europe’s defensive capabilities and its economies. The NATO Alliance, and all under its defense umbrella are fortunate to have such a dependable Ally. Romania’s abilities to defend itself and its people, and to project peace and stability in the world’s troubled regions are directly tied to the Black Sea. Black Sea commerce, extractives, and exploration contribute to Romania’s future.

While there is such economic opportunity, there is also a concomitant threat. Our Ballistic Missile Defense Agreement helps protect the United States and Europe from hostile and irresponsible actors in the Middle East and beyond the horizon, but just 400 kilometers from Constanta, Russia continues to illegally occupy land that belongs to another Black Sea neighbor, Ukraine. This occupation violates international law, international norms, Ukraine’s territorial sovereignty, and the inalienable right of its peoples to live in peace—all while destabilizing the entire region.

Romania is safe and open for business because it is secure in its Alliance, its Article V assurances, and in its friendships. We can all be thankful for this… again we don’t need to look far afield to see the alternative. Shared visions of democracy and creative, open markets drive us forward. The alternative to open commerce, prosperity, and a well-funded and robust national defense is all too apparent – and undesirable.

There is much talk these days of the future of NATO and the relationship between Europe and the United States. In this regard, Romania shows the way forward and provides an excellent example of how the transatlantic alliance works when both sides are fully committed. We are two nations and peoples bound by our shared commitments to democracy, individual liberty, human rights and dignity, and the centrality of the rule of law. Through both document and deed, the bilateral relationship between our two countries has never been stronger. As we further protect our mutual security, so will our peoples and economies continue to prosper. It is an honor to represent my nation in such a stalwart ally and in such an important region.