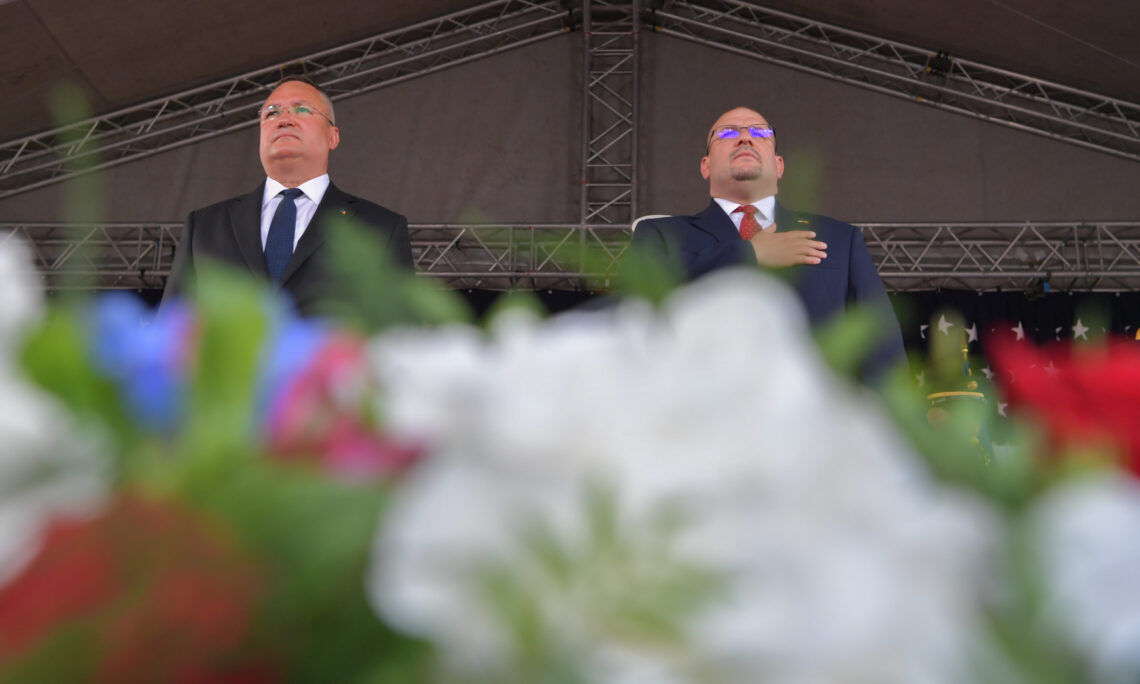 Good afternoon, everyone, and thank you for joining us as we celebrate the 246th birthday of the United States of America. Prime Minister Ciuca, interim Senate President Gorghiu, President of the Chamber of Deputies Ciolacu, members of the Diplomatic Corps, Ministers, dignitaries, partners, and friends, your presence here this evening honors us all.

July 4, 1776, was a day when the historical and spiritual forces of good won a tremendous victory. Among our many roles, we are all gathered here today as representatives of those forces, and of the universally felt drive to work towards the betterment of humanity. Thanks to those who acted on that hot July day in Philadelphia, we stand here now on the shoulders of giants. In speaking with you, I am fondly reminded of last year’s Independence Day Reception.

Though it was smaller by necessity, it was also untainted by the evil of Russia’s brutal invasion of Ukraine, and its resulting international destabilization. Now of course, it is also a pleasure to greet so many friends in person once again—and let us all together hope that quarantines and restrictions will soon just be shared memories. It would, however, be insincere of me to pretend …even here in this spirit of celebration…that these are anything but times that try our souls. Sunshine friendships and alliances collapse under such pressure tests, but real alliances are only re-tempered and strengthened by them. Ours is a very real alliance and friendship, and you…all of us…are its stewards.

Last Independence Day, we collectively marked a decade since the United States and Romania signed the Joint Declaration on Strategic Partnership for the 21st Century, and together our countries now mark 25 years of declared partnership. These bellwethers bear testimony to an unshakable alliance between two great nations and peoples; an alliance based upon our common commitments to democracy, a love for liberty, and the sanctity of both rule of law and of the individual. The sacred obligations we share to foster these principles long predate these anniversaries—they even predate our 142 years of diplomatic relations. I have read that as early as the 1750s, decades before independence, Romanians were present in the 13 Colonies and contributing to the land that was to become the United States of America.

Until very recently, we could not have foreseen the direction our world was heading in or portended that it would soon be pulled back 80 years into the darkest hours of the last century. Thankfully, our mutual efforts allow us to squarely confront these challenges.

Both the United States and Romania are nations that have embraced their pasts and used them to build resilience and lay paths towards a brighter future. Please look around this evening and see the tangible reminders of what dedicated peoples can achieve in just one century. From the beautiful antique Ford on display and how much it says about our friendship that this iconic American industrial powerhouse now sets production records right here in Romania at its plant, in Craiova, to the banners above you on the building here which depict some of America’s greatest talents and its toughest struggles.

The suffragette imagery is very striking—it captures our efforts to be that shining city on the hill. America, then and now…ever moving Towards a more perfect union. Our accomplishments are manifold, and the milestones we have reached are unprecedented. None were won in a vacuum nor without incredible effort and sacrifice—just as none have hoisted us onto the pedestal of perfection. We have mis-stepped, and been mistaken, but we strive to be accountable and for 246 years our arc has bent towards the more just and moral. So too has Romania—a fellow democracy with a multitude of its own accomplishments and luminaries, taken incredible strides forward over the last century.

When thinking of the past, I am reminded of Einstein’s adage, “Learn from yesterday, live for today, and hope for tomorrow.” Individually and collectively, we have learned from our past, and in looking at where we stand today, I am deeply pleased on many fronts. What an honor it has been to represent this Mission over the past year as the foundations of our partnership and friendship have grown ever stronger.

Just in May alone, we saw ground-breaking and unprecedented steps forward toward real energy security and independence in Romania with the green light for domestic construction of cutting-edge, American-designed, Small Modular Reactors.

With this bold step—in conjunction with progress on the works at the Cernavoda Power Plant— Romania’s leadership—many of whom are here today—showed the clear-eyed vision needed to deliver to the Romanian people safe, reliable, sustainable, and clean energy. Romania is on the cusp of leading the way forward towards a new era of energy innovation and security. And in today’s world, any nation that is not energy independent is in a precarious situation. The spectrum of positive results that this foresight will have for Romania is immeasurable.

Tech incubators, foreign direct investors, and cutting-edge research and development, all of these seek and require clean and reliable energy, which Romania will soon have in abundance. There is also the incalculable boost in confidence that comes from leading the way forward. These steps are going to pay dividends for decades to come, and we could not be happier for our Ally as it reaps these rewards.

In speaking of the present, I would be remiss if I did not return to the security situation and our Alliance. Seventy-nine years ago, our nations were on opposite sides of the conflict which then tore the world in two. As we are all well aware, we remained ideological foes for decades after that, separated by yet another murderous shadow cast by the Kremlin, the impenetrable Iron Curtain. And yet today… Romania is one of America’s strongest and most dedicated Allies.

Its leaders just returned from the NATO Summit in Madrid. At that summit, Romania provided its Allies with the unique and invaluable perspective of a trusted NATO member that borders a nation under barbaric Russian attack. Seeing the presence of some of America’s most storied military units in Romania now, working alongside our Allies in nearly seamless interoperability is amazing and inspiring. I mentioned Madrid, and I am sure that many of you are well aware, while in Spain, President Biden announced that the United States will soon be sending a brigade combat team to Romania.

So, together we are moving towards an even stronger deterrence and defense posture. Our presence is proof to everyone that we take our security commitments seriously, that the United States stands wholly prepared…and capable…of fulfilling its Article V commitments, the Musketeers’ oath.

I am also very pleased that Romania is leaving such a very positive mark on the world. Yes, certainly in the security realm where this nation is now an exporter of stability, but also in two ways that speak directly to the goodness and decency that flow throughout this country and its people. I speak of Romania’s willingness to render humanitarian aid to its besieged neighbor and its commendable success in countering the scourge of trafficking in persons.

I know the Romanian people well—I have lived here for several years. Their capacity for profound goodness comes as no surprise to me. But I will admit that I was taken aback… and moved…both by the official Romanian response to those fleeing Ukraine, as well as the private response of so many of its citizens. The processing of refugee applications, the delivery of aid, the efforts to streamline work eligibility, and the drive to ensure that a generation of Ukrainian students are not lost are, in a word, “admirable.”

The dedication and compassion shown by Romanians on the street are every bit as inspiring, as those shown by its government and leaders.
All the rides that were provided to the refugees, the selfless acts, the donations and the care that were given just cemented what I and so many already know; this is a great country full of good people. Likewise, the tangible steps Romania has taken against human traffickers, including prosecutions, imprisonments, and extraditions, testify that it takes its obligations seriously. We applaud this effort.

Our pasts are intrinsically interwoven, our present is in our hands, and it is always risky to prognosticate on the future. I will, however, be bold enough to say that it does look bright. World events are challenging… they always will.

But many things look only promising—from the world stage where Romania is proceeding with its OECD accession discussions, to the bilateral relationship where we continue to reach new record levels of exchanges between our societies… cultural, scientific, academic… there are so many doors between us that are very much open. All of this speaks only to a lasting friendship and partnership and its fantastic future.

Before I conclude my remarks today. I ask you again to look around. Organizing this wonderful event year-after-year is an incredibly daunting task. Our Embassy team works for months, year around, to make this all possible and to bring our shared vision of America’s birthday to life. Please join me in thanking them for all they have done, and all have yet to do this evening. Thank you.

I ask also that you join me in thanking another group whose generosity makes this all possible—our sponsors, both American and Romanian. To these sponsors, I say please know that we never lose sight of the fact that it is your willingness to join and support us that makes every year a memorable success. We could not do this without you. Thank you again for joining us.

In closing, the United States is proud to call Romania a friend and Ally, and the American people will always cheer this nation’s wins. God bless you all, and Happy Independence Day.

It is now my pleasure to introduce Nicolae Ciuca, the Prime Minister of Romania.