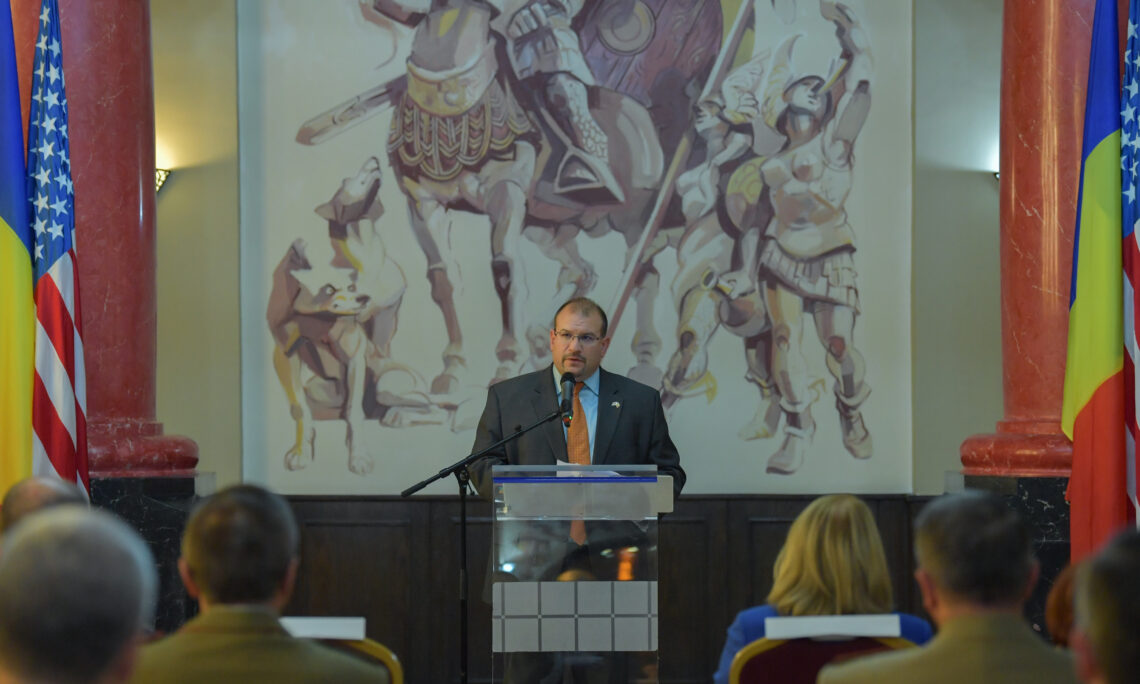 It is a pleasure to join you all to mark a milestone in our bilateral relationship, the 25th anniversary of our Office of Defense Cooperation. After a quarter of a century, this region and the world are safer due to its work and the efforts of many of you gathered here.

On August 28th, 1996, the ODC opened its doors. Our partnership, and indeed the world, looked much different then…a full five years before the international security paradigm shifted forever with the dastardly attacks on the United States, and a decade before Romania’s NATO accession. It was a time when the newly-free Romania had yet to transition to a fully volunteer defense force, and it well predated our Joint Declaration on Strategic Partnership for the 21st Century…still the cornerstone of our alliance.

One year following the establishment of the ODC, then-President Clinton visited Bucharest—and he said of our partnership, “It is important to America because Romania is important to America—important in your own right and important as a model in this difficult part of the world.” He was correct. The ODC’s work, and absolutely the contributions of the Alabama National Guard in the decades since, have unfailingly shown just how deeply the United States values this nation as both an ally and a friend.

The bilateral military education and training efforts that have been undertaken, the joint exercises and operations have all worked to move our defense forces towards nearly seamless interoperability and have helped bring Romania forward to its rightful place as a security-exporting nation whose troops embody readiness and professionalism. My ODC colleagues have to credit a litany of tangible accomplishments which their office has accumulated over the years. However, they tell me that their proudest achievements are the friendships they have built with their Romanian counterparts. Much of military cooperation—similar to diplomacy—truly comes down to the person-to-person relationships we develop with likeminded partners who we trust. Clearly, our shared democratic foundations define and undergird the future of our relationship.

Since its inception, this relationship has proven invaluable countless times and in numerous theaters. As regional challenges have evolved and increased and the threats that our nations face have become ever-more pressing, it has reassured both our nations and our Alliance that we do not face them alone. Our cooperation has advanced peace in Eastern Europe and what started as a limited Special Operations Task Force at MK now hosts the most robust contingent of rotational forces on the Black Sea. Romania is home to the Aegis Ashore Ballistic Missile System—NATO’s most formidable shield in Eastern Europe—and Campia Turzii hosts strategic intelligence, reconnaissance, and surveillance assets that support our most critical missions. Surely, 25 years ago our nations had a shared vision of what a strong bilateral defense relationship could mean to this nation and to this region, though I must wonder if any back then foresaw Romania joining NATO and soon becoming the linchpin of the Alliance’s presence on the Black Sea.

The United States and Romania have enjoyed diplomatic relations for over 140 years—together we have tackled terrorism and the evils of human trafficking and corruption; proudly, we have shared the best of our cultures, our societies, our universities and our businesses…though much remains to be done. But this evening we have the distinct pleasure of celebrating a quarter century of success and a cornerstone of partnership.

I greatly look forward to the next 25 years and I congratulate the Office of Defense Cooperation as well as the Ministry of Defense on this important anniversary. To all of you here this evening, Romanian and American alike, and to all of your predecessors and colleagues, please know that you have our professional appreciation and respect. Good evening and God bless you all.