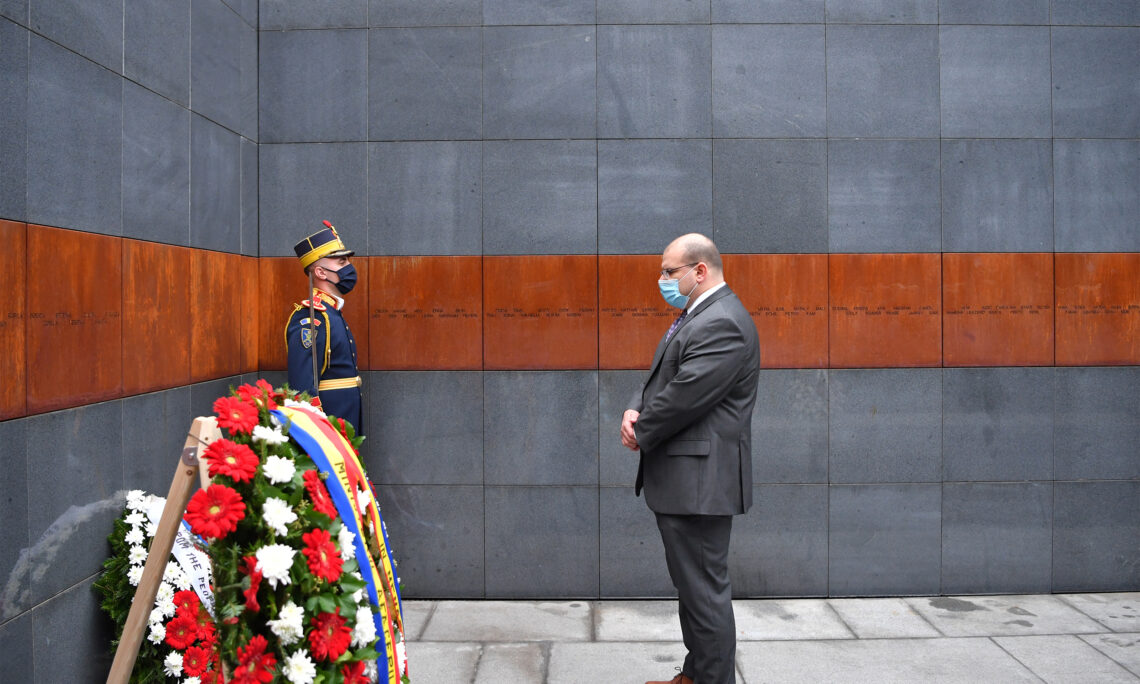 It is an honor to join you all in this solemn commemoration of Romanian victims of the Holocaust. In my short time in Romania, I have already gained a deep appreciation for how the people of this country have struggled, grown, and healed from their historical collective wounds under both fascist and communist regimes.

Intentional obfuscation and historical amnesia effectively hid the horrors of the Holocaust from the people. However, the Romanian people have learned from the lessons of the past, today being an example as well as a testament to the Romanian spirit and the great strides made so far.

So much of the progress that Romania has made is thanks to heroes like Elie Wiesel, and the Institute that carries his name and continues that essential work to this day. I want to thank Director Florian for his tireless efforts and long-standing cooperation with both the U.S. Embassy and the U.S. Holocaust Memorial Museum.

When the Museum of Jewish History and the Holocaust in Romania opens, it will represent a new stage in Romania’s efforts to come to terms with its past and bring people together. I cannot emphasize how important the physical reminder of history will be, inside the immovable walls of a prominent building in the capital city, to sustain an accurate, shared historical narrative. And more than a reminder of the shameful past, it will serve as an example to future generations to prevent such an atrocity from occurring in the future.

While vitally important, the museum alone is not sufficient. It should be accompanied by a robust Holocaust educational curriculum in schools and textbooks. I was very pleased to learn that the Ministry of Education has signed an agreement with the Wiesel Institute and the U.S. Holocaust Memorial Museum last year to improve Romania’s Holocaust education; the Embassy is willing to assist in furthering this excellent endeavor.

I was also very pleased to learn that important amendments were passed in Parliament this week, with near unanimous support, that will greatly improve the process of restitution for Holocaust survivors, their families, and the families of Holocaust victims. I want to thank the Parliament for its tireless work advancing these important issues.

While it is heartening to see the genuine progress made by the Romanian people and government in addressing the tragic events of the Holocaust, there still exists an urgent need for all of us to continue to fight against anti-Semitism, against hatred, and against discrimination in all its forms. Unfortunately, these evil forces continue to haunt us, both throughout Europe and in the United States.

That is why commemorations and remembrances are so vitally important. As Elie Wiesel said, “For the dead and the living, we must bear witness. For not only are we responsible for the memories of the dead, we are also responsible for what we are doing with those memories.” As a matter of survival, we must understand the circumstances and forces that led to the Holocaust, and then use that knowledge to prevent such an atrocity from ever happening again.

When incidents of anti-Semitism begin to rise, they must be addressed with public condemnation and prosecutions when appropriate. As the Irish statesman and philosopher Edmund Burke said, “The only thing necessary for the triumph of evil is for good men to do nothing.”

Today, we remember the Romanian Jews and Roma — men and women, children and elderly who were stripped of their rights, persecuted, and murdered during the Holocaust. In their honor, we renew our commitment to fighting modern anti-Semitism and racism, and to ensuring such an atrocity can never happen again. Do not let evil triumph; never be the person who does nothing when prejudice raises its ugly head. Let us continue to work together to end this scourge.